Dara learned to combine yoga and something called the Emotional Freedom Technique (EFT) and cured herself of a decade of binging and purging, a technique that has refocused her life. She now teaches … 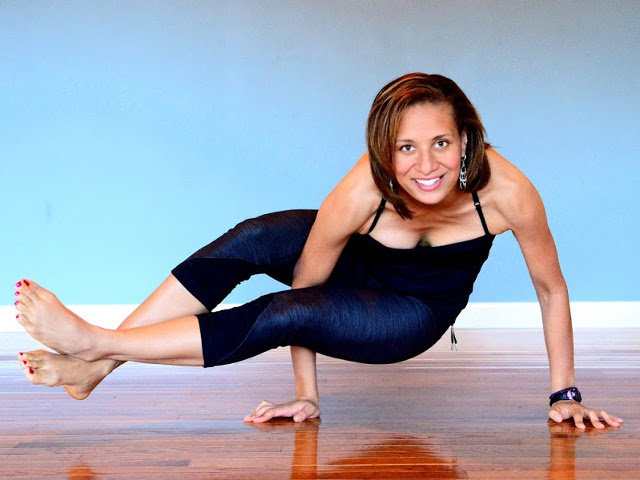 Daralyse Lyons, 31, of Mt. Airy, a certified yoga instructor who suffered with a severe eating disorder (anorexia and bulimia) for 10 years, starting at age 14, and a near-suicide, will do a book signing and author event for her paperback book, “The Emotional Yoga Experience: Use Your Body to Heal Your Mind,” at the Mt. Airy Read and Eat, 7141 Germantown Ave., on Thursday, April 30, 7 p.m. Lyons will talk a bit about the book, read a few excerpts and then mix and mingle with the audience for an hour or so.

The book provides a step-by-step approach that, according to Daralyse, can help you become free of self-limiting problems. “Instead of spending more hours on a therapist’s couch trying to rewire your brain,” she said, “this book will show you that when your mind cannot help you get unstuck, your body can. Your body stores negative emotions, and because these feelings are retained in your body, trying to think away your negative thoughts will not work. So many times 'talking cures' are ineffective because they rely on the mind to diagnose issues that exist beyond the scope of its understanding.”

To date, Lyons has sold 10 books to publishers. Four have already come out — “The Lost Daughter,” “The Dating Diet,” “The Emotional Yoga Experience” and “Confessions of A Straight Gay Woman.” According to the author, “Healing is my professional passion, but writing my personal one. Ever since I was 5 years old, I wanted to be a writer. One of the greatest joys of my life is putting pen to paper.”

For Lyons , founder of Mt. Airy-based Emotional Yoga, LLC, therapists, doctors, nutritionists, hypnotherapists and social workers and all the talking in the world could not cure her of an eating disorder that afflicted her for more than 10 years. It was only after an episode of binging and purging that led to a suicidal phone call to her mother that Lyons, who was becoming a wealthy young woman climbing the ranks of a Greenwich, Conn. financial firm, hating it and wondering what her real purpose in life was, began to climb out of the tunnel of despair.

She learned to combine yoga and something called the Emotional Freedom Technique (EFT) and cured herself of a decade of bulimic behavior in about seven minutes - a technique that has refocused her life. "I don't know how it worked," said Lyons in an earlier interview with the Local, "but it did. I always thought the desire to binge and purge would come back I waited for it. But it never did. It just doesn't exist in me. When I realized it wasn't coming back, I said, 'I have to help others.'"

After suffering from seizures as a child, Lyons , who is open about her past because she believes her story can help others, was 14 years old when she realized that her life "was out of control. I felt the world was falling apart, like I was dying inside."

Instead of succumbing to what she perceived to be random negative emotions and aspects of her life beyond her control, she decided she would manage her own body and started to "starve" herself and "binge and purge. It took on a life of its own. I couldn't stop. I thought it was normal. I thought I had to live that way to get out of bed in the morning."

A few years into living with her eating disorder, Lyons went to take yoga lessons. At first, she hated the discipline she now loves and teaches because when she sat in silence in yogic positions and focused on her breath, she "burst into tears. I didn't know how much psychological pain I was in." But one quality of yoga, Lyons realized at once, was the connection of mind and body from which she had become "so disconnected."

About seven years ago, Lyons was miserable; she felt life was hollow. She was not working for an oppressive employer; she just felt she was "not doing what I was supposed to be doing." She quit her job. She realized she needed to save herself. She dove into another period of binging and purging, and was convinced she could never cure herself. She called her mother and told her she was depressed and suicidal. Her mom asked her to think about what was causing the feeling. Lyons thought, and replied that it was fear. Her mom told her to think about the first time she felt fear, to try to recall the experience and "tap it out."

"Tapping it out," it turns out, is part of the needle-less emotional acupuncture system known as EFT, developed by Gary Craig, 70, a California engineer and ordained minister (not a therapist.) It focuses on rubbing and tapping pressure points on the body, like under the outside of the lower chest beneath the breast, or below the eyes. Advocates claim it releases energies that have been blocked in our body's meridians because of stress and anxiety.

Lyons got off the phone with her mother and, for whatever reason, began to combine yoga poses with the EFT her mother suggested. She concentrated on fears she had first experienced as a child as a result of seizures. Lyons did two rounds of EFT, which took all of seven minutes. After she finished, she looked around her kitchen at all "the binge food lying around. It was everywhere. Normally, this is when I would start to binge and purge again. But I didn't want to. The feeling was gone."

Six years ago, Lyons started to share her technique and became a certified yoga instructor through the Yoga Education Institute. She has helped rape and trauma victims and individuals with severe obsessive-compulsive disorder. "Once the brain starts to make positive affirmations, something happens,” she said. “It either works for someone, or it doesn't. I don't know why EFT and the brain made those connections, but in my case it definitely did."