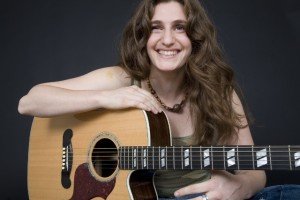 Mt. Airy singer/songwriter, educator and parent Chana Rothman will have a family-friendly CD release party for her latest CD, “Rainbow Train,” this Sunday.[/caption]

Mt. Airy singer/songwriter, educator and parent Chana Rothman will have a family-friendly CD release party for her latest CD, “Rainbow Train,” on Sunday, May 3, 2:30 to 4:30 p.m., at the William Way LGBT Center, 1315 Spruce St. in center city.

What makes this CD different from contemporary pop music on the radio is that the songs are not about young love, heartbreak, teenage angst, alienation, etc. On the contrary, the message of Chana's songs is that every child should be able to envision a world full of possibilities and free of all barriers and discrimination based on race, religion, gender and sexual orientation.

According to Kathy O’Connell, host of the Kids Corner radio program on station WXPN, “'Rainbow Train' is a joyous musical tool celebrating the many ways we are who we are.”

“It also allows us to be more open to the ways that all humans express themselves, which is ultimately a celebration of diversity and humanity. In this current cultural climate of 'anti-bullying,' education on healthy gender development allows us to get to some of the root causes of bullying. And we can gain tools to talk about our differences while nurturing respectful conversation and approaches.”

“Rainbow Train” was produced by well known Philadelphia producer/engineer Bill Moriarty. At the CD release party there will be performances by other musicians, merchandise for babies/toddlers, kids, caregivers, parents, grandparents and teachers, a dance party for all ages, etc.

Rothman, who is 40-ish and has performed her blend of folk, reggae, world beat and hip hop at World Café Live and Tin Angel, co-wrote the songs on “Rainbow Train” with other artists — notably Avi Wisnia, favorite local singer/songwriter; pianist Mikael Elsila, Mt. Airy resident; rapper and Mt. Airy resident FlipSide, and transgender singer/songwriter Mya Byrne, who had recently come out as a woman.

In the title track Chana's message of inclusion and tolerance is clear: "Rainbow Train, each person has their own name because we are not all the same/we are the change/we are the Rainbow Train." And "Sometimes people tell you who to be/they try to put you on a box that you can't even see/but we're moving to a place where we're free/and there's plenty of room for you/there's plenty of room for me."

Chana's lyrics are reminiscent of some of the folk rockers and progressive singer/songwriters of the 1960s like Cat Stevens, Bob Dylan, Joan Baez and John Prine: "Your body is your own/you can decorate it how you like/no matter what your body parts, you're a beautiful sight.” And "Don't be afraid of what you see/don't be angry, don't be mean/give me a chance to grow and be holy." Or "Gender, gender; put it in a blender! … We are not all the same/we are the change/we are the Rainbow Train."

Unlike many pop singers who fear being associated with a “message” that might turn off certain listeners, Chana insists that her message is to challenge gender norms, create dialogue based on honor and respect and celebrate a diversity of gender expressions.

After many years of living in Brooklyn and touring extensively, the Toronto, Canada, native settled in Northwest Philadelphia about seven years ago and began building a nest — literally — with husband, Rabbi Kevin Kleinman. “We moved here when Kevin graduated from rabbinical school and got a job as assistant rabbi at Reform Congregation Keneseth Israel in Elkins Park,” Chana told us in an earlier interview.

“Here's what we liked about Mt. Airy when looking to move: lots of trees and hiking trails, a strong community-oriented vibe, food co-op and Jewish community. What more could you want? OK, maybe a cafe that stays open past 8 p.m.”

Chana previously made a captivating album entitled “Beautiful Land.” Knowing she only had time and budget for six songs (she was pregnant at the time), she sifted through her collection and chose the stories she couldn't live without: courageous people who had inspired her, from the townships of South Africa to green mountains of Jamaica; a beloved student who died suddenly and tragically; a silly dance her partner does just for her; and even a frank conversation about her own body image.

For more information about the CD release party, contact eaklepi@gmail.com, www.chanarothman.com or www.facebook.com/chanarothmanmusic. Rothman's music can be found on iTunes or Amazon.com.