In addition to his impressive skills as a musician and entertainer, Miron, 66, is a therapist who works with adolescents, families, adults and couples addressing a wide range of mental health issues. … 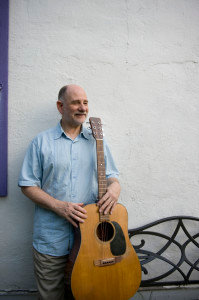 In addition to his impressive skills as a musician and entertainer, Miron, 66, is a therapist who works with adolescents, families, adults and couples addressing a wide range of mental health issues.

Growing up on Long Island, Art Miron’s parents, both musicians, pushed him into studying and playing classical music. And like the good son that he was, he did as they wished. But his mother inadvertently also introduced her son to folk music by way of a radio station she would listen to every Sunday.

“And she also had records from groups like The Weavers that I listened to, and quite enjoyed, and soon I found myself shifting away from the classics and more inclined toward folk music,” says Miron, who has lived in Mt. Airy with his wife Trish for almost 30 years.

When he was a junior in high school, Miron and his parents moved away from Long Island to Lancaster, Pa., where his interest in folk music continued to grow. After graduation from Lancaster High School, he attended Penn State to major in psychology, although he admits, “I hadn‘t a clue what to do with my life — except play music.”

So after graduation, working for the Lancaster Redevelopment Authority, and being exempt from the military draft, he eventually “dropped out“ to lead a kind of Jack Kerouac-type of existence. “I quit my job and joined the counterculture. I let my hair grow long and hitchhiked around the country and played a lot of music. At the time, I had a brother living in Madison, Wisconsin, and I went there to retrieve a truck I had lent him. But I found I liked it there, decided to stay and eventually enrolled at the University of Wisconsin where I got my master‘s degree in social work.”

Working for three years in a residential treatment center for adolescents in Eau Claire, Wisconsin, Miron soon realized that as much as he loved Wisconsin, it wasn’t home for him. “I missed the diversity and urban feel I was more used to, so I eventually moved to Germantown to be closer to my family and began working in a field where I decided I could help people live better lives.”

Miron worked in residential, foster care and acute partial hospital programs for over 20 years, mixing clinical and administrative responsibilities. During the same time, Miron obtained credentialing for providing family therapy, and in 2002 became part of Associates of Springfield Psychological Group. Today, as a clinical director and therapist, he works with adolescents, families, adults and couples addressing a wide range of mental health issues.

But with all the work he does, music has never been far behind, including spending Sundays at the Jewish Children’s Folkshul, a secular Jewish organization, singing with children and performing B’nai Mitzvahs and holiday observances. He also recently released his first major CD called “Collectables” (available on Amazon.com and iTunes), named for his hobby of collecting antique bottles.

Today, at the age of 66, Miron says people have told him over the years his voice has gotten better and stronger. “People who hear me tell me I have a great voice, and at my age I know I’m lucky to be able to sustain my vocal quality. Now I mostly sing what I call ‘Americana’ music, a blend of folk, country, alternative country, some pop and singer-songwriter.”

A great deal of that music can be heard as Miron plays his guitar at various venues around the area, often joined by Millard Brown, who also plays on several tracks of Miron’s CD. Thoroughly enjoying every aspect of his life, Miron says he actually has “three careers. I have a career of antique bottle collecting, making music and my professional career. And of course, my family. There is truly a lot of joy in my life today, and I hope I bring lots of joy to others with all that I do. And I'd like to mention the importance of the support my wife Trish, a psychologist, and daughter Jessie, an engineer, in enabling me to pursue my special interests.”