Mt. Airy director stirs up toil and trouble at Arden

Mt. Airy’s Alex Burns is seen directing at a rehearsal for “Macbeth” at the Arden Theater in center city. (Photo by Maura Roche)[/caption] by Carole Verona Almost 20 years ago, Alexander Burns, …

Mt. Airy director stirs up toil and trouble at Arden 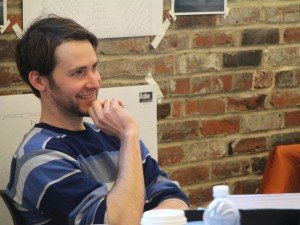 Mt. Airy’s Alex Burns is seen directing at a rehearsal for “Macbeth” at the Arden Theater in center city. (Photo by Maura Roche)[/caption]

Almost 20 years ago, Alexander Burns, who was then a student at Germantown Friends School, wrote a few letters to Terry Nolen, co-founder of Philadelphia’s Arden Theatre Company, telling him that he wanted to direct a show at Arden. “I also met with him a number of times when I was a student at Northwestern University and after I graduated in 2002 to tell him what I was working on and to reiterate how I wanted to work at the Arden,” Burns said.

Burns’ interest in theatre eventually led him to co-found Quintessence Theatre Group in Mt. Airy in the fall of 2009. And although Terry Nolen doesn’t recall those letters from 20 years ago, he later become aware of Burns’ work at Quintessence. “I went to see his production of 'Hamlet,' which I thought was absolutely terrific,” said Nolen. “The approach, the way that the cast used language and the staging were really dynamic.”

This month, the story comes full circle as Burns, a 33-year-old Mt. Airy resident, directs Shakespeare’s “Macbeth” at Arden. “When Terry called and asked what I thought about doing Shakespeare at the Arden,” said Burns, “right away I thought about Ian Merrill Peakes, one of their main actors and ensemble members. I had seen him do a great deal of Shakespeare in Washington D.C. where he works at the Folger Theatre. So I said I’d love to do 'Macbeth,' and I’d love to do it with Ian.”

According to a brief synopsis of the play on Arden’s website, “Before 'House of Cards' and 'Game of Thrones' there was 'Macbeth.' Fueled by ambition, Macbeth cuts a bloody path to power, spurred on by his wife, Lady Macbeth, and a prophecy that he will be king.”

“I’m building the show around Ian,” Burns said. “He’s a powerful actor. He’s a magnetic force and an incredible showman in the sense that he can take over a room with his emotional state. The challenge was to find other actors who could exist in the world with him. I was lucky to meet Judith Lightfoot Clarke, who will play Lady Macbeth. She has equal power to Ian in terms of her stage presence, command of language and emotional power.”

Quintessence audiences will also see three actors who have appeared on the Mt. Airy stage: Josh Carpenter (Malcolm); Sean Bradley (Donalbain/Seyton) and Ashley Izard (Witch/Gentlewoman). Burns sets the play in a time period he calls “Gucci Medieval,” with costumes ranging from armor with broadswords to runway looks for the women. “It’s thrilling when you can innately understand the characters because of the outfits they’re wearing as opposed to being overwhelmed by the realism of a specific period of the world,” he explained.

As director, Burns also brings supernatural elements to the production by portraying the three witches or weird sisters as “creatures who bubble out of the earth and have a primeval thrill and darkness to them.” His intention is to invoke the full tradition of witches, extending from the Greek Furies to a more contemporary Harry Potter-like interpretation. Audiences will also be treated to a witches' dance, something often cut from other productions.

Burns, who was brought up in the Quaker school tradition, explores the question of when an act of violence is OK and when it isn’t, when it is celebrated and when it is looked upon as villainous, depending on who orders and approves the act. “It was important to me that we were going to be able to unleash the violence in the play. There’s a huge amount of blood in 'Macbeth.' It’s talked about, and it haunts the whole play. Once the bloodletting has begun, it can’t stop,” he said.

Because “Macbeth” involves a lot of blood and combat, it’s expensive to do in the theater. “It’s only because it’s at the Arden that I am having the opportunity to have a go at it the way I would like to,” he said.

What’s most exciting to Burns is that he sees Lady Macbeth and Macbeth as heroes, contrary to the way they have generally been regarded over the last four centuries. “They’re extraordinary human beings who are close to achieving their ultimate goal and vision. Then, they overreach, break the rules and give into these darker impulses. Then we see the fallout that occurs. To me, that’s what makes the play so modern and relevant today in that there are so many times in life when you have an opportunity where you can reach out and grab something, even though you know you are going about it the wrong way or cutting corners.

“A human being is always responsible for having that insight and perspective before he makes the choice. I think Shakespeare does an extraordinary job exploring that idea and that question. So that’s what I’m going for.”