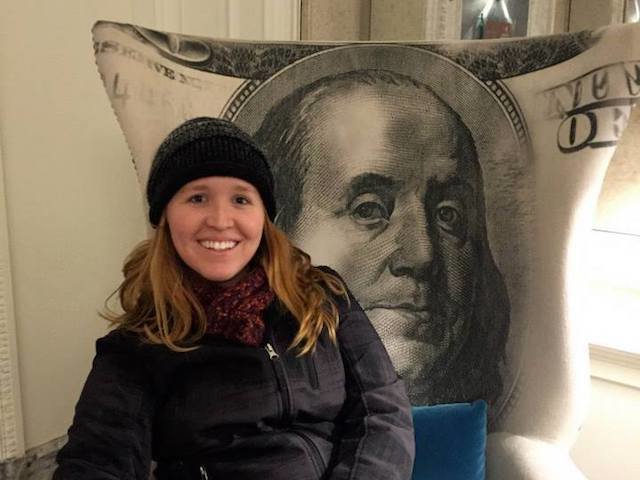 Mt. Airy Learning Tree has had hundreds of teachers in its 36 years as an invaluable community resource that now averages 750 classes and 5,000 students per year, but Kristen Dieffenbacher, who is currently teaching a course about American Sign Language (ASL), is unique. She is the only Deaf instructor MALT has ever had, “as far as I know,” said Judy Weinstein, MALT Executive Director.

Kristen, 29, grew up in Wallingford, Delaware County, where she was the only Deaf family member. “When my parents found out that I was deaf at 10 months (they pieced it together after a fire alarm in the house went off, and I was sleeping peacefully),” she said, “I had a few speech therapists intensively train me to read lips and speak. That continued until I graduated from (Strath Haven) high school.”

Ed. note: According to Kristen, “There is a difference between Deaf or deaf (capital 'D' and lowercase 'd'). Lower case 'd' (deaf) is a medical term, and capital 'D' (Deaf) is for those who identify themselves as culturally Deaf. I am Deaf.”

Although she went to a public school, there were trained teachers of the deaf who could focus on areas where deaf students struggled. They also had Communication Access Realtime Translation (CART), also called open captioning or real-time stenography. (This, is the general name of the system that court reporters, closed captioners, voice writers and others use to convert speech to text.)

An excellent student, Kristen did well at West Chester University, where she majored in Psychology, minored in Studio Art and had CART available for all classes.

“Socially, I didn't (do well),” she said. “It was really hard to go from a home where every one knew who you were and knew how to talk to you to a complete foreign experience where you meet tons of new people every day. There were a lot of group get-togethers, and it was very hard for me to follow through. Reading lips in a group setting is almost impossible, even when hearing people know they need to speak slowly. Throughout college, I felt isolated and frustrated.”

Kristen learned ASL while in college, but “the more I chatted with Deaf people, the more I realized how difficult it is for me to follow conversations with hearing people. I was missing so much information. For a year and half, I stopped learning ASL because I felt disconnected from the hearing world, which was what I identified with. For so many years, I grew up thinking I was catching everything with hearing people by lip-reading. I thought the reason I zoned out during conversations was because I was bored, but really, it was because I couldn't follow the conversations, and zoning out became a habit.”

After college, Kristen, who has been a local resident for six years, applied and got the job as a Personal Care Assistant at the Pennsylvania School for the Deaf in Germantown. “Although my 'signing' was not fluent at first, the PSD community welcomed me with open arms.” Kristen has been at PSD for six years, where she is now the Administrative Assistant for the Director of Student Affairs. How does she communicate with hearing people who do not know sign language? “I've had years of hearing and speech therapy and can communicate verbally. If that doesn't work, then I write, point or gesture.”

Kristen, who had 11 students in the eight-session MALT course she just completed on March 27, has also done private tutoring for the Deaf-Hearing Communication Centre, Inc. (DHCC) in Swarthmore. At MALT, “I enjoy seeing the students' 'Aha!' moments when they understand something that is complicated. I also love knowing that they will be able to go out and sign to Deaf people as a common courtesy. When I worked in retail businesses, it was always a heartfelt moment when a customer signed and I was able to communicate with them. I would love to see more of that.”

What does Kristen think she misses the most by not being able to hear? “That's hard for me to imagine since I've never been able to hear, and I wouldn't change a thing about it.”

What is the hardest thing Kristen ever had to do? “Accepting the idea that I will always struggle following along in conversations at family events.”

What deaf people does Kristen admire the most? “There are so many that I can't just pick one. Those who don't let deafness conquer them, and they go beyond people's idea of Deaf (ASL users) people.”

If she could meet and converse with anyone on earth, living or dead, who would it be? “Ben Franklin. I would love to see his thought process when inventing new stuff.”

If Kristen could have any job on earth, what would it be? “Depending on my mood, it changes a lot. Today, it would be a film editor.”

The Outdoor Gardeners gather to honor some of their members