West Mt. Airy conductor Jeri Lynne Johnson led her Black Pearl Chamber Orchestra Saturday, March 10, in one of the most enjoyable and inspiring concerts I’ve heard in years. Performed in the visually dreary yet acoustically supportive Episcopal Cathedral in West Philadelphia, Johnson and her musicians performed symphonies by Joseph Boulogne (Chevalier de Saint-Georges), Franz Joseph Haydn and Wolfgang Amadeus Mozart before the most enthusiastic and best-dressed audience I’ve encountered in decades. I hasten to add that the crowd sold out the cathedral, packing it front to back and side to side. 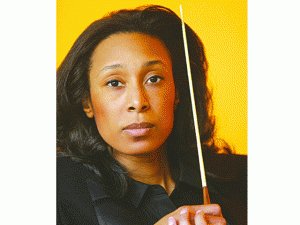 Johnson’s program was splendidly chosen, expertly arranged and magnificently played. She and her 27-member ensemble opened with Boulogne’s “Symphony No. 2 in D major,” then rounded out the evening’s first half with Haydn’s “Symphony No. 44 in E minor.” The Boulogne was a wonderful way to start the music making, the Haydn was the emotional highpoint of the program, and the Mozart sent everyone off sharing its own high spirits.

Born on the Caribbean island of Guadeloupe, Boulogne is the first known classical composer of African ancestry. The son of wealthy French painter George Boulogne and his African slave, Nanoon, he was sent to France at the age of 13 to be groomed as a gentleman. By the age of 19 he was a member of the Royal Guard and by 25 he was famous as a violin virtuoso. By 1773, he was the director of one of Paris’ (and Europe’s) finest orchestras. His “Symphony in D major” actually functioned as the overture for the premiere of his opera, “The Anonymous Lover,” in 1780.

Its three movements – Allegro presto, Andante and Presto – are flawlessly cast in the traditional forms established by Haydn, the creator of the classical symphony, yet each is invested with a high degree of individual character. The first movement balances the bright major tonality of its exposition with a darker modality in its development. The second movement is a minor-key masterpiece of lyrical expression, while the third offers an engaging dialogue between sections of the string choir.

Johnson led the Black Pearl Chamber Orchestra with a firm yet open touch, holding ensemble, balance and blend to an immaculate level yet allowing her players the freedom to sing Boulogne’s refined melodies with elegance and wit.

Although Mozart’s “Sinfonia concertante” is a frothy diversion when compared to the spiritual depth of the Haydn, its performance by violinist Kelly Hall-Tompkins, violist Robin Fay Massie and Johnson and the Black Pearl Saturday night was stellar. Especially noteworthy was the strength of Massie’s playing. It’s not unusual for the viola part to be played in so subdued a manner that it becomes little more than an alto accompaniment for the leading soprano of the violin. Not so this time around. Massie’s strongly projected and beautifully modulated brawny tone made certain that her voice would be heard as an equal solo partner with Hall-Tompkins’ silvery timbre. And Johnson accompanied with the sure hand of a seasoned veteran.

The Black Pearl Chamber Orchestra is one of the region’s musical treasures, and Jeri Lynne Johnson is a jewel of a conductor.

The Curtis Opera Theatre, in association with the Opera Company of Philadelphia and the Kimmel Center for the Performing Arts, presented Hans Werner Henze’s “Elegy for Young Lovers” in the Perelman Theater March 14, 16 and 18. Conducted by George Manahan and stage directed by Chas Rader-Shieber, the mounting is unquestionably the highpoint of the current opera season to date.

Henze chose W.H. Auden and Chester Kallman as his librettists for a story that focuses on the monstrous egocentrism of a poet and the lives he affects for better or worse. Yet unlike many operas – or plays, musicals or films – that deal with artists of one kind or another and that remain constricted by their characters, “Elegy for Young Lovers” reaches out far beyond the confines of a poet’s creative process and its requirements to envelop the hopes, dreams and needs of any and all of us.

The triumph of Henze’s 1961 score is its cumulative theatrical beauty. It’s not pretty in the manner of Gian Carlo Menotti’s operas. Individual phrases aren’t tunes you leave the theater humming on your way home. But those musical lines of sung text interact with Henze’s brilliant orchestration as well as with other vocal lines to weave a rich fabric that projects far more than a mere narrative – it delineates revelations of character that illuminate the motivations of us all.

Curtis’ production was exemplary in every way. Sunday afternoon’s cast was right on the mark, especially baritone Julian Arsenault as Gregor Mittenhofer, the poet, and soprano Anna Davidson as Hilda Mack, his “muse.”