Karen Misher, a Mt. Airy mother of autistic twins, started her own school for autistic children in September of 2013 that now has 37 students. By Len Lear According to the Centers for Disease … 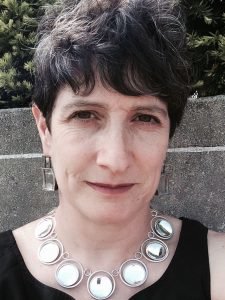 Karen Misher, a Mt. Airy mother of autistic twins, started her own school for autistic children in September of 2013 that now has 37 students.

According to the Centers for Disease Control and Prevention, more than 3.5 million Americans live with an autism spectrum disorder, a brain-based disorder characterized by social communication challenges and restricted repetitive behaviors, activities and interests. And for reasons not fully understood, the prevalence of autism in U.S. children increased by 119.4 percent from 2000 (1 in 150) to 2010 (1 in 68).

Parents of autistic children often do not know where to turn for help, so one Mt. Airy mother, Karen Misher, who has autistic twins, took matters into her own hands and in September of 2013 literally opened her own school, A Step Up Academy, in Jenkintown, for autistic pre-schoolers through fourth grade.

How did Misher feel when she realized that her children were autistic? “Like all parents, we were devastated to hear that our children faced such difficulty. But you don't go seeking appointments with developmental pediatricians without already being aware that there are problems. While you might think you are ready to hear those words, it is still quite difficult.

“But it's what you do next with that information that is important. The diagnosis can open doors to therapy options. Never be afraid to say it. Own it. I tell people that my children have autism in that same breath and manner that I'd say they have red hair or green eyes. It is who they are.”

Having started the school with her two children, Nathan and Xander, who were both 6 years old at the time, Misher can now boast an enrollment of 37 that is growing every year. Misher, who has lived in Mt. Airy since 2011, does not have a background in psychology or pediatric medicine; in fact, she has been an art professor at Arcadia University in Glenside for 20 years. Then what prompted her to think she could start a school for autistic children?

“I am an artist. We invent and seek creative solutions to problems all the time. As a professor I often speak about the creative process as a way of looking at the world, not as a means to an end. In this case, I saw that missing educational model and was approached about a building that was coming available. I was surrounded by expertise both at Arcadia as well as the large team of professionals that worked with my children. Like a sculptor with the right materials, it was a matter of getting the right people in a room to open the conversation.” 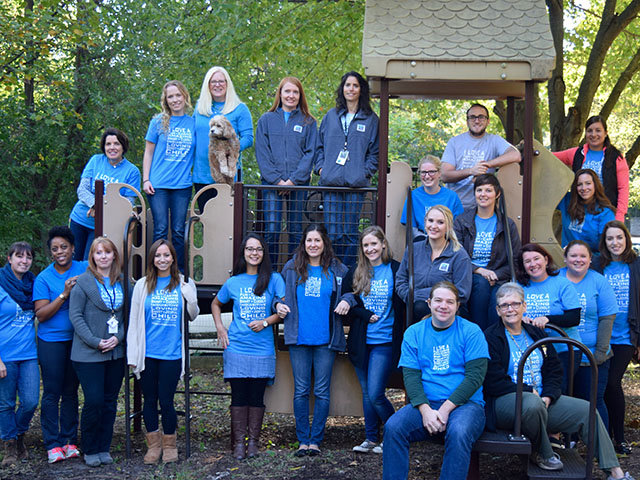 The proud staff of A Step Up Academy is seen here along with Chloe, the school mascot (top row, third from left).

Some of the school’s first teachers came through professional connections. As the school has grown, they now go through a traditional search process for staffing needs, “seeking out those special people who love what they do and do it well. We have an amazing group of people who work at our school that I am amazed by every single day.”

A Step Up Academy is licensed through the Pennsylvania Department of Education. Obtaining the necessary certification was quite involved. “A small group of skilled professionals came together and wrote our application in a very short time frame,” said Misher. “It was a herculean effort!”

The “family-centric approach” is in part responsible for the success of the relatively new school, according to the Mt. Airy innovator: “Being family-focused was incredibly important for me as a parent. Autism is with a child 24 hours a day and affects the entire family. Many of our children have significant speech and language issues and can't tell a parent ‘how their day was.’ We have an open-door policy that allows parents to come to the classroom any time they want, any day they want. We combine that with meetings every eight weeks to go over student progress but also, just as important, to bring the team together to share information.”

A significant percentage of the children at A Step Up Academy come from Northwest Philly. What does Misher like or dislike (if anything) about living in Mt. Airy? “We love My Airy! We find this neighborhood to be supportive and open. We walk through our neighborhood, and we know people, and they know our boys. We have book stores and coffee shops and restaurants. I worried that I would really miss center city when we moved, but we found our real home here in Mt Airy!”

A Step Up Academy, 520 Meetinghouse Rd. in Jenkintown, is hosting a major fundraiser on Saturday, Oct. 21, 6 to 10 p.m., at the Flourtown County Club. There will be face painting and a local Zydeco band, among other fun attractions. For more information, call 215-885-1075 or visit www.AStepUpAcademy.org

No comments on this story | Please log in to comment by clicking here
Please log in or register to add your comment
Donate now to CH Local
The Latest
For the holidays, consider these foodie gift finds
For the past eight months, I have delved into the world of DIY in ways I never thought possible. I used to think DIY meant spending five hours putting together a maddening Ikea product. But since …
Holidays return to the Hill, a little cozier
The holiday season this year is a little different, and traditions are being reinvented to keep up. Holidays on the Hill might require more social distancing, but that means visitors can shop and stroll with more room to look around.
SCH alumna donates business proceeds to Operation Smile
Springside Chestnut Hill Academy alumna Nilah Jordan '20 recently donated $1,500 to Operation Smile to help pay for six cleft palate surgeries, antibiotics for 30 children, and a new exam station for …
Firehouse proposal challenged Hill’s sense of surroundings
Working in the field of design, my interests are quite varied, especially in how we are all affected by our surroundings, both interior and exterior. It has always been fascinating to me how people …