by Grant Moser Encaustic painting, simply put, is painting with tinted beeswax. But it’s much more than that. An initial image is created, and then the wax is applied layer after layer, obscuring …

Encaustic painting, simply put, is painting with tinted beeswax. But it’s much more than that. An initial image is created, and then the wax is applied layer after layer, obscuring some parts of the picture, letting other parts stand out, ultimately creating a sense of depth and distance. 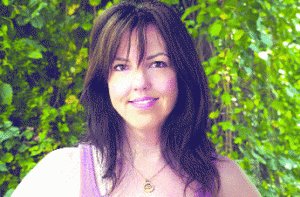 The life of local artist Clarissa Shanahan, 45 (an encaustic artist), is no different, built layer upon layer, experience upon experience. In her early 20s the New York state native (Long Island up to age 18, and Brooklyn up to age 33) knew she wanted to be an artist but didn’t have the first inkling about how to make that happen — until she stumbled upon an article about decorative painting. “All of a sudden I found something I wanted to do,” Shanahan explained.

She took the initiative and tracked down everyone mentioned in the article, called every studio that specialized in decorative painting, and applied for every scholarship she could find to learn more about how to pursue this art form. It paid off when she got a scholarship to a studio in New York City.

She began getting her own private jobs doing work in people’s homes (even once touching-up a mural in Oscar de la Renta’s New York apartment). A friend recommended her for a photo-tinting job at Planet Hollywood, which eventually led her into the scenic shop community. Jobs followed doing theater sets, Christmas windows at department stores in New York, and even stained glass displays.

She was hired to work on “The High Life,” an HBO production, in the mid-‘90s, which allowed her to get her into the United Scenic Artists union. She was now part of the movie industry. “I’m a really big movie-head, and it never occurred to me that there were artists that make these sets, that I could have a career in the movies doing what I did. I sort of got there through the back door.”

Through this one job, she began a new phase of her life, working on more than 20 movie and television productions, including “The Horse Whisperer,” “Meet Joe Black,” “Angels in America,” “Summer of Sam,” “Pollock” and “Boardwalk Empire.”

“I was pretty fortunate,” Shanahan remembered. “I found a home pretty quickly and was very lucky because the ‘charge scenic’ that hired me was one of the best people I’ve ever worked with. We clicked, the crew clicked, I liked the way of working.” 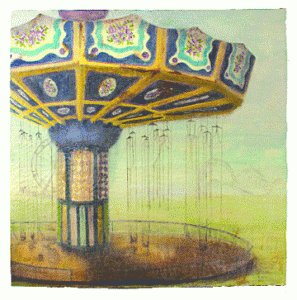 But after a while she got antsy. Shanahan decided she wanted to go to school. “I’d never finished any formal education. I wanted to be a student.”

She began applying to schools, looking for academy-style instruction. This means a student progressing through stages: drawing, painting, print-making, sculpture — and lots and lots of practice. “Very old-school, that’s what I wanted” she said.

So she took a break from film, and began attending the Pennsylvania Academy of the Fine Arts (PAFA) full-time. She endured a bit of minor celebrity on campus since she had done the Lee Krasner paintings for the movie “Pollock.” But it was her past experience that really helped. She began teaching a gilding class while still a student, since she was the only one at the school with experience.

It was also where she discovered encaustic painting. The practice of encaustic painting dates back to the Egyptians who used it to create funerary portraits. The Greeks, who used beeswax to repair ships, found they could use it decoratively if they added pigment. It’s been used ever since, including by medieval artists to create icon paintings.

She liked the detour it presented from the normal mediums. It offered her a material that creates a sense of depth, motion and substance. “I really like tactile surfaces, things that I want to touch, things that are different from what you’re used to seeing … There are ways to use wax that do things that you can’t do in any other medium.

“I’d been to Chestnut Hill before to visit. I’d seen the neighborhood, and it was where lucky people got to live. This is my own Bedford Falls from ‘It’s A Wonderful Life.’ Everything I need is here,” explained Shanahan about her decision to make Chestnut Hill her home.

It was the art scene she found here that cemented her decision. It all started with her involvement with Nichols Berg Gallery at 8611 Germantown Ave. “I walked in there and met Scott Nichols, and we became friends, and I got involved in what they do.”

Her move to Chestnut Hill also allowed her the stability to begin teaching. She is currently offering courses in the continuing education department at PAFA, and. she has taught at the Fleischer Art Memorial and the Nichols Berg Gallery here in Chestnut Hill.

She is also creating own art work. “I’m a late starter. I painted for other people for 25 years. Now I’m moving everything out of the way and making that my primary focus.”

Many of her paintings focus on crumbling, forgotten and derelict man-made structures, from buildings to amusement parks. The images are often haunting, with muted colors, that evoke the idea of memories, whether remembered or already lost.

For more information on the classes she is offering or to see more of her work, visit http://www.clarissashanahan.com/ or http://nicholsbergart.com/.