Lawyer-turned-novelist Tom Mendicino’s powerful book, “The Boys from Eighth and Carpenter,” about a brutal father and his sons, one gay and one straight, was discussed during Tom’s appearance … 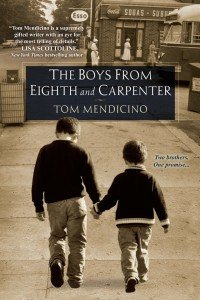 Lawyer-turned-novelist Tom Mendicino’s powerful book, “The Boys from Eighth and Carpenter,” about a brutal father and his sons, one gay and one straight, was discussed during Tom’s appearance at Big Blue Marble Bookstore in West Mt. Airy last Saturday evening.[/caption]

Last week I wrote about Tom Mendicino, the latest lawyer-turned-novelist who is earning critical plaudits for his just-published novel, “The Boys from Eighth and Carpenter” (Kensington Publishing Corp.) He spoke at Big Blue Marble Bookstore in West Mt. Airy last Saturday evening. I have recently been reading “The Boys,” which is undoubtedly one of the best books I have read in a very long time. The prose is brilliant, and the story is compelling. I can’t wait to get back to it each night to see what happens next. Here are some more answers from my recent interview with Tom:

At what age did you realize you were gay?

I never really had the option of being in the closet, not fully. I was painfully effeminate and withdrawn as a boy, which, as you can imagine, did not make life easy in a working class town. Fortunately, I had protective parents. Not the type you see today who encourage boys like me to express ourselves in gender-neutral environments but the type that took on anyone who would torment me. I underwent a drastic physical change during adolescence, developing a gruff voice, becoming more conventionally “masculine,” and in college I self-identified as a “sort of/kind of bisexual” until I understood how unfair and selfish my insincere “confusion” was to someone who had been unfortunate to become emotionally involved with me. I was out from then on, meeting my partner when I was 24. He and I were married in January, 2014.

You got some really great reviews on your earlier novel, "Probation." How do you feel about that?

The success of “Probation” was surprising considering the limited market for the subject material. I learned to roll with the punches, it being a polarizing book as the protagonist is, at times, a very unpleasant character. But the book was named an American Library Association Barbara Gittings Stonewall Honor Book in fiction, which was very gratifying as my partner had known Barbara and her partner Kay for many years, and I had and have been a great admirer of their courage. (Ed. Note: Gittings was a Philadelphia pioneer in the gay rights movement.)

Where did the idea for “The Boys” come from?

I began writing “The Boys” after receiving a hostile reception from my neighbors during the 2008 presidential primary campaign when I knocked on their doors canvassing for Obama. My mother had once remarked that despite my “success,” I lived in a neighborhood that, for all intents and purposes, wasn’t all that different from the western Pennsylvania factory town where I had grown up. The book is not autobiographical, but if I were to walk into St. Mary Magdalen de Pazzi or St. Paul on Sunday, I could match each and every one of those parishioners with someone I recall from St. Barbara or St. Regis, our parishes when I was kid.

The “Papa” in your book is cruel, even sadistic, to his sons. Where did that character come from?

The old goats from the neighborhood are drawn from memories of my father and his four brothers, and the sadistic Papa was inspired by the horror stories of the creative corporal punishments meted out when they and their cousins were kids. (I was related to every Italian in my hometown.) But gentrification is moving at a rapid pace, and every summer there are fewer mom-moms and pop-pops monitoring the sidewalks from their folding chairs and more bright young professionals (or hipsters) swinging yoga mats and pushing double-wide strollers.

Who are your own favorite authors?

I never know how to respond when I’m asked about my favorite authors. I’ve read every word Richard Price has written, but I wouldn’t say he’s my favorite. At times I’ve gone on binges. I remember my “Emile Zola period.” I usually answer the question this way. Besides DC Comics and Father Butler’s “Lives of the Saints,” the book that made the strongest impact on me as a boy was “Lord of the Flies.” As an older adolescent, “The Last Picture Show” and “Red Sky at Morning.” And as an adult, particularly an adult writer, I am most overwhelmed by “American Pastoral.” I think it is criminal that Philip Roth is not a Nobel laureate.

What are your hopes for the “The Boys?” (Dumb question, I know)

That it sells better than “Probation” and that I begin to have more of a presence in the writing community here in Philadelphia.

If you could meet and spend time with anyone who is now deceased, who would it be and why?

I should lie and tell you some lofty and inspirational historical figure such as Gandhi or Marcus Aurelius, but the truth is it would be my father, whom I was both physically and emotionally attached to as a young child. As I become a man of a certain age, things are coming full circle, and I dream of him often.

You live near countless great restaurants in South Philly and center city. Which ones are your favorites?

My favorite restaurant is Ristorante La Buca on Washington Square, where we have been going for decades. Excellent food (especially the fish) and service and a welcome respite from the high-decibel sideshows that pass for restaurants these days.