by Tom Utescher In recent volleyball seasons Mount St. Joseph Academy has made a strong showing within the challenging Athletic Association of Catholic Academies and in the early rounds of the PIAA … 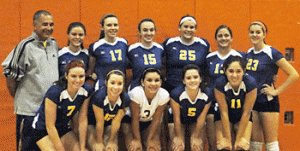 In recent volleyball seasons Mount St. Joseph Academy has made a strong showing within the challenging Athletic Association of Catholic Academies and in the early rounds of the PIAA District 1 tournament. However, the goal of advancing far enough in the district playoffs to qualify for the PIAA state tournament has been a goal that has eluded the Magic – until this fall.

Finishing the regular season as runner-up in the highly-competitive AACA and with a 13-3 record overall, the Magic were seeded third for the district playoffs and then lived up to that billing by placing third in the tournament itself. As soon as they reached the quarterfinals at the district level, they automatically locked up one of the four District 1 bids to the state tourney.

In the first round of pool play at States, Mount St. Joe defeated each of the other three teams in its group, including the eventual state champion, Hempfield High School. The Magic ended their run in quarterfinal-round pool competition, where they defeated fellow District 1 entry Avon Grove, but lost to Seneca Valley from western Pa., and to Dover High School. Dover, like Hempfield, hails from District 3 in central Pa.

“I don’t think anybody expected us to go as far as we did,” said junior outside hitter Kasey Cannon. “We wanted to go out there and have fun, but at the same time we’re all really competitive and we had great chemistry.”

Only a handful of the current crop of players saw a lot of varsity playing time in 2009. Senior middle hitter Carly Krill has been in the starting rotation since her freshman year, and another upperclassman who was a varsity regular last fall was Val Smith, a skilled setter and poised leader who earned team MVP honors this season. There was also junior libero Regina Trabosh, known for her gritty digs and precise passing.

Five players from 2009 had graduated, but MSJ coach George Trabosh (Regina’s father) related, “At the beginning of this season I had a feeling that something special was going to happen, but I wasn’t sure what. It was a matter of how the players would gel and how they would respond in the big games on our schedule, and our schedule was really tough.”

Regular-season matches against formidable Catholic Academies rivals served as valuable preparation for the playoffs. Merion Mercy, the reigning league champion, has now won the Class AA state championship for four years in a row. Villa Maria, which plays in Class AAA (the large school division) along with the Mount, is a former PIAA champion with many state tournament appearances.

This fall Mount St. Joe swept its home-away series with Villa, and also defeated the Hurricanes at an invitational tournament.

“I don’t know of any other Mount teams that beat Villa every time they played them,” noted Cannon, who was also proud of the way the Magic performed against a number of non-league powers, such as 2009 state runner-up Allentown Central Catholic.

“Beating Allentown was huge,” she said, “and we also won against teams like O’Hara and Carroll, and we beat Emmaus in a tournament.”

In addition to co-captains Krill and Smith, the contingent of seniors included Colleen Patterson, who had previous varsity experience, and Taylor Drueding, Mackenzie Kelley, and Allie Wolper.

Wolper and junior Jackie Lohin were Smith’s understudies at setter, and their classmate Kelsey Robbins subbed in at middle hitter. Two other 11th graders made major strides as outside hitters.

“Kasey Cannon did a great job of seeing the court and finding holes in the opposing defense,” said Coach Trabosh, “and then Nikki Driscoll seemed to follow her lead and really came on strong in the playoffs.

“Every player had a role,” the coach continued, “and we were successful because they bought into that idea and saw how it helped the team as a whole.”

On first glance one thing that stands out about the MSJ squad is its relative lack of height compared to rival high school teams in the area. No six-footers here; two of the Mounties measure in at around 5’10”, and everyone else is smaller.

“Our defense was pretty good, and when we attacked, we attacked on angles and we tried to go quicker than the other teams,” Trabosh commented.

“We tried to be smart hitters,” Cannon elaborated. “We didn’t just crank it all the time, but tried to use the block and see where the openings were. We were definitely athletic and quick, and we could run plays faster than a lot of people.”

In the state tournament, each match consisted of three sets, which were played in full even if one team won the first two sets of the encounter.

In the first round, the regional stage, the Magic traveled to Carlisle High School and opened up in Pool C against Hempfield, which had won the state championship three times between 2004 and 2008.

“We knew they were really good, but we just let it all loose,” said Cannon, who helped the Mount prevail, two sets to one. The Magic logged another 2-1 victory against Altoona High School, and then knocked off Philadelphia’s Central High, 3-0, to win the pool and move into the quarterfinal round.

The eight teams that remained all gathered at Central York High School, where once more they were divided into four-team pools. The Mount lost its first match, 28-26, 25-20, 25-22, to Seneca Valley, which is located north of Pittsburgh. Elimination loomed as the Magic lost their first set against Avon Grove, 16-25, but they recovered to win the next two segments, 25-22, 25-21, leveling off their record in the pool at 1-1.

“We needed to beat Dover to get into the semifinals,” Trabosh related. “They won the first set and we won the second, then they got us in the third.”

The departing seniors will leave the Mount franchise with some gaps to fill, but the younger members of the varsity and the top players on the JV team have shown promise.

“I think we could be just as good next year,” Cannon predicted. “We’re still going to be small, but I think we can go far again.”