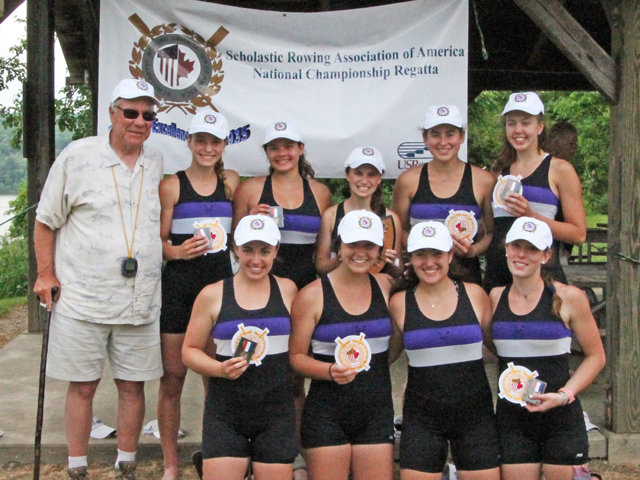 After the big Stotesbury Cup Regatta wound up on May 18 there was little rest for rowers who decided to move on to the next level of competition. To race in the Scholastic Rowing Association of America (SRAA) national regatta, area crews had to travel to central Ohio in time to launch early last Friday morning.

Unlike many other major regattas, the SRAA's don't have timed head races in the first round of competition. Instead, all crews that enter are seeded into six-lane heats from the get go. In many events there was a semifinal round following the initial stage of the regatta on Friday, while in categories with fewer entries the top six boats from the heats advanced directly to the finals.

One of two GA boats entered moved on from the first round. In their varsity double, Derek Walkush and Dylan Robertson placed third in the last of three heats on Friday morning, then ended their run in the semifinal round.

GFS and PC were also competing in the boys' varsity double event, and each boat advanced out of Friday morning's racing by placing second in its heat. PC's Cole Frieman and Matt Groshens then placed fifth in their semifinal race, and only the top three would move on to the finals.

Doulin Appleberry and Owen Keim of GFS made it through by coming in third in the first semifinal race, and in the finals on Saturday afternoon they finished fifth, less than three-tenths of a second out of fourth place.

Two other GFS entries and one from PC were in events with no semifinal stage. Winning his heat in the varsity single, Alec Sandroni of the Tigers went directly into the finals, and in the girls' varsity single PC's Julia Veith (only a 10th grader) reached the final round by placing second in her initial heat.

Both of these solo rowers would finish fifth overall. The other GFS finalist was the girls' lightweight double containing Amelia Sanchirico and Isabel Mehta. They finished third in their heat on Friday and then came in sixth in the finals the following afternoon.

PC's Mancini and McDade placed second in their heat behind Augustine Classical Academy from upstate New York, which had the fastest time overall in the heats and would go on to win the gold medal. In the other first-round heat, Shipley School and Ridgewood High School (New Jersey) both had times a little faster than PC's, but the Quakers would eclipse both of them in the finals.

Augustine won easily in 5:46.808 and the silver medal went to Berkeley High School in 5:51.595. In California, most scholastic rowers race with club crews instead of for their high schools, and Berkeley is one of very few exceptions. The PC duo was a close third in 5:52.438, taking the bronze medal over fourth-place Ridgewood (5:55.035). 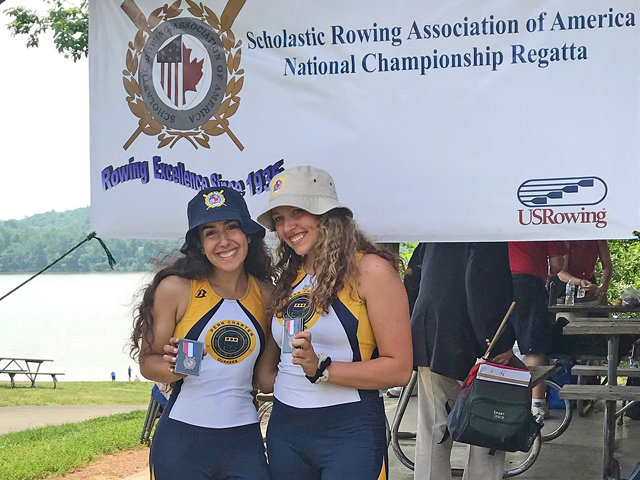 The Mount had eight boats entered in the regatta, and all but one advanced out of the opening heats. After coming in second in one of four heats in its class, the Magic's JV four (Ella Valencia – cox, Emma Dougherty – stroke, Maddy Donahue, Olivia Guza and Ruby French) placed fourth in its semifinal, one place and a little over second away from a trip to the finals.

In the freshman eight, suburban Chicago power New Trier High School was the fastest boat in every stage, winning the gold medal. The Mounties (Annmarie Wallis – cox, Sarah Burns – stroke, Christina Kelly, Grace McDonough, Leah Manzo-McCottry, Julia Geib, Sarah Powell, Kate Kelly and Maeve Carmody) won the third of four heats and went through the semifinals with a second-place showing. They were fifth in the finals, just 0.191 seconds behind the fourth-place crew.

With a smaller field overall in the lightweight four, the Mount boat (Caroline Donahue – cox, Izzy McCafferty – stroke, Ainsley Morasco, Grace Morrow and Moira Ferry) progressed right to the final race after winning the first of three heats. They would not fare as well in the finals, ending up in sixth place.

In the finals, O.C. overpowered the field to claim the gold medal, while the Mount took the silver four seconds ahead of Notre Dame Academy from Toledo, Ohio.

New Trier had been three seconds faster in its heat race, but in the finals the Magic gave the Trevians quite a battle. The Illinois eight won the gold medal by 0.132 seconds, while the silver-medalist Mounties were almost seven seconds ahead of third-place Saratoga Springs High School.

The lightweight eight was another event with only two stages, and it was straight to the finals for the Magic (Sofia Bernal – cox, Claire Broderick – stroke, Kaylee Dougherty, Shayne McKernan, Caroline Kyle, Harriett Blatney, MaryKate Ciolko, Nicole Uzzo and Caitlyn Lawson) after they won the first of three heats with the second-fastest time overall.

The top time on Friday was logged by Buffalo's Nardin High School, but in the finals Nardin wound up with the bronze medal behind the victorious Mounties (5:16.946) and silver medalist Radnor High School (5:19.982).

The MSJ eight won the first of six heats with a time in the 5:20 range, but in other sections New Trier was four seconds faster and the Mount's time was also surpassed by Walt Whitman and Bethesda Chevy Chase (both from Maryland) and by Saratoga.

It was a different story in the semifinals, where the Mount was nearly four seconds faster than the best of the rest as it won the first of the two sections.