Mom and dad missing from the Thanksgiving dinner table

Flourtown resident Barbara L. Sherf is surrounded by her now-deceased parents, Barbara A. Sherf and Charles Sherf. The bride was 28 in this wedding photo taken by Lindelle Photographers 26 years ago. …

Mom and dad missing from the Thanksgiving dinner table 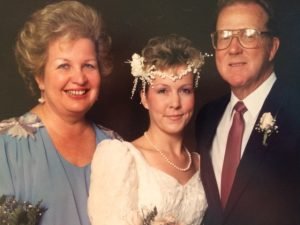 Flourtown resident Barbara L. Sherf is surrounded by her now-deceased parents, Barbara A. Sherf and Charles Sherf. The bride was 28 in this wedding photo taken by Lindelle Photographers 26 years ago.

We just celebrated our first Thanksgiving without both mom and dad. My father would have been 89 on the Sunday after the holiday. Eighteen months ago our beloved mother passed away at 79.

A two-time breast cancer survivor, Barbara A. Sherf succumbed to the sepsis infection after a pacemaker was placed in her weakened and weary body. If there is one word that sums up my mother it is resilient.

At the age of 9, she was part of  her beloved Aunt Bina’s wedding party in Luzerne, PA. As the respected schoolteacher by the name of Albina Bagonis got off a bus, she whispered to a young student to cover her legs if she went down. On the last step the 35-year-old woman fell to the ground and died from what was believed to be a sudden massive heart attack. My mother, an only child, never fully recovered from the sudden loss of a woman who was more like a sister to her.

Fast forward to my mother as a new bride at 19. During her first pregnancy, the doctor could not detect a heartbeat at 6 months, and yet my mother had to carry that baby boy to full-term and deliver the child. He was named after my father, Charles, and was baptized and buried. They had four more children, and we didn’t really talk much about baby Charles until he appeared on their deathbeds.

Mom spent one hellacious night in a rehab facility fighting the infection and became delusional before she was sent back to the hospital for stronger antibiotics and pain medication. I was with her. As she lay there, she kept looking at the ceiling, and I said, “Mom, what are you looking at?”

Now my parents had been married for 22 years but were divorced for more than 30 years. They hadn’t seen each other in a dozen or more years, and my father was in the Veterans' Home in Vineland with progressive dementia. So I asked my mother if she was referring to our father, her former husband, Charles, who was always known as Charlie.

She said, “No, it’s my baby Charles. He’s come to take me dancing.”

Mom, who was a force, did not want to die in the hospital, so she returned to her home in Somers Point, New Jersey, on hospice. I would tell her to put the blue dress that she wore at my wedding on and that it was time for her to go dancing with baby Charles, and I believe she is doing that.

As the funeral home was pulling away with her body, I received a call from the staff at the Veterans' Home.  “Your dad is all agitated, and we can’t understand why. Should we medicate him?” asked Dr. Carlitto Lim.  When I told them my mother had just passed away, they expressed sympathy and said they often got this kind of behavior with couples who were still connected.

Flip forward to Sunday, Oct. 23, when I was called again to Vineland as my father had been hospitalized for heart and respiratory issues. I packed one overnight bag and spent the week there advocating for him. We had one really special day together. On Monday my father looked up at me with his big blue eyes and said “Barbie.” He hasn’t called me that in some time. I had a copy of the book we had written together about our horseback riding experiences out of Monastery Stables in Mt. Airy and exploring the Wissahickon Valley, along with his stories as a teen cowboy riding at Totem Ranch, TV personality Sally Starr’s Ranch and even Cowtown Rodeo. The book was titled “Cowboy Mission: The Best Sermons are Lived…Not Preached” for a reason. Despite being an altar boy and going to Catholic elementary school at Our Lady of Perpetual Help in Maple Shade, New Jersey, my father’s idea of church was taking sunrise and sunset rides and being kind to people.

On that good Monday, I read the book over and over to my father, and we even watched his video. I told him that my community at the Chestnut Hill Quaker Meeting, which I attend, was keeping him “in the light” as he took this final ride.  He asked, “How is church?” So I turned on the flat screen TV and found the Catholic Channel and watched church in high def. When I turned the channel off, he asked me how the baby was. They had been talking about “Baby Jesus” during the sermon and the Mass, so I said, “Whom do you mean, Jesus?” He shook his head no. I sat there, and the lightbulb went off.

“Do you mean baby Charles?”

I looked my dad in the eyes and said, “Dad, I’ve had you for 54 years of my life. As a toddler you taught me to ride horses, taught me right from wrong and showed me how to tell a good story. Now it’s time for you to be with baby Charles.”

I believe my father is now riding around Colestown Cemetery in Cherry Hill with his son in his lap, his best friend Charlie Pfluger next to him, and maybe even Sally Starr bringing up the rear.

I’ve received so many condolence cards, but there is a special one from fellow horse lover Susan Landers of Mt. Airy. It has a picture of a horse on it, similar to my father’s first horse, and the text says: “ Not gone … just waiting patiently at the end of the trail.”

Thank you, baby Charles, for guiding them home.

Barbara Sherf will be telling this story in person at the Saturday, Dec. 3, Patchwork Storytellers Guild Open Story Swap at 1 p.m. at the Chestnut Hill Library in the room at the rear. Go to www.patchworkstorytellers.org for more information about the group.