Connie Bolig, vice-president of the board of KeystoneCare in Wyndmoor, welcomed back her friend Jai Chestnut during a visit in September, 2013. Chestnut was an HIV-AIDS patient whose life was saved … 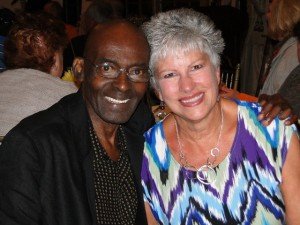 Connie Bolig, vice-president of the board of KeystoneCare in Wyndmoor, welcomed back her friend Jai Chestnut during a visit in September, 2013. Chestnut was an HIV-AIDS patient whose life was saved and extended by 10 years by the care he received at Keystone Hospice.

A memorial service was held last Monday afternoon, March 30, at Keystone Hospice in Wyndmoor for Jai Alvin Chestnut, who died on Feb. 21 at the hospice at the age of 75.

Chestnut touched hearts of everyone he met. Of the thousands of Philadelphia area residents I have written about for local newspapers and magazines over the last 48 years, Chestnut was undoubtedly one of the most remarkable, unforgettable and inspirational.

When Chestnut, a former professional dancer, entered Keystone Hospice in June of 2004, no one expected him to live more than two or three months. After all, patients are only sent to any hospice to receive palliative care after all medical experts decide that nothing can be done to save their lives. It is a rare case when any patient leaves a hospice to resume a normal life.

Chestnut had been transferred from Cooper Hospital in Camden because he was unable to eat or care for himself. “I weighed 96 pounds,” the 5-foot-11 South Carolina native told me in December of 2013 when he was 74. “I knew I was dying. I got rid of all my possessions.”

On his 65th birthday on Aug. 17, 2004, the former professional dancer had managed to work up the energy for “one last dance.” In the backyard of Keystone Hospice at 8765 Stenton Ave., under a stately tree, Jay entertained an audience of hospice workers, residents and friends with the “Dance of the Dying Swan.” “I looked like a dead guy who got up one last time to walk,” said Jai, whose “last dance” was filmed by cameramen and later shown on Channel 12.

Numerous treatments had been tried with Chestnut since he was diagnosed with AIDS in 1996, but this time a Dr. Tadaldi at Temple University Hospital tried one last form of “anti-retroviral therapy.” After a period of horrific side effects, Chestnut's agony and other side effects began to diminish gradually; his appetite and energy returned, and he put on weight.

With constant vigilance, especially on the part of Keystone Hospice founder and executive director, Gail Inderwies, and support of staff and volunteers during the period of extreme side effects, Jay lived to dance many more days. David Traupman, vice-president at Keystone Hospice, told us in an earlier interview, “I cannot tell you what an inspiration Jai was to everybody around here. He is a wonderful human being who inspired us all here every day with his upbeat attitude, and it is a joy to watch him dance.”

“I expected to die before my 65th birthday,” Chestnut told me, “but the personal, loving care that started from the moment that I entered the hospice continued unabated. Although very few people leave the hospice (alive), I was surprised at how many thought they would and made great plans for what they would do when the time came. I suppose they were trying not to think about dying … The treatment I got from the staff at Keystone Hospice could not be matched. Gail Inderwies coordinated it all like a conductor with a finely tuned orchestra.”

When I interviewed him in 2013, Jai, who left the hospice in September of 2005, weighed 150, felt great, taught dance at Temple's Annenberg Center and rehearsed regularly. Chestnut's recovery from AIDS, which defied logic, probability and medical science, was not the first miracle of his life. The first was his almost unbelievable journey as a once-illiterate, dirt-poor sharecropper's son to a 30-year career as a professional dancer, ballet master and choreographer with the Paris Opera, La Scala in Milan and almost every other major opera house and dance company in Western Europe.

Jai Chestnut was born in rural South Carolina where his parents were sharecroppers. His father made and sold corn liquor, and his mother was known as a “heavy picker,” able to pick between 250 to 300 pounds of cotton a day. Jai was considered by many to be a natural dancer, always moving like “a worm in hot sand.”

His early experience with dance began in church, watching adults “shout” to the music of the piano and tambourine. After years of sharecropping and raising nine children, the Chestnut family moved north to Camden, N.J., when Jai was 12 years old. For the first time, Jai attended school every day.

At the Sidney King Dance Studio in Camden in the mid-1950s, a girl named Lola Falana, a Germantown resident who went on to have an international career as a dancer and nightclub performer, began teaching Jai dance steps and techniques.

“I was hooked,” said Jai. “I felt myself dancing with a spirit. It just came out of me somehow.” Jai could not afford dance lessons, but he offered to mop and clean the dance studio in return for lessons. At the age of 17, after excelling at the dance lessons, Chestnut received an offer to join the Larry Steele Review, a group touring Italy for six weeks. Jai was adopted by a German family, who paid for him to attend Volkwang Schule, the National School of the Performing Arts in Essen Rhine, Westphalia, for two years, followed by a scholarship to the Paris Opera Ballet.

Jai's remarkable career spanned over three decades as a dancer, ballet master and choreographer with the Paris Opera and other opera houses and dance companies throughout Europe. Jai also participated in a cultural exchange at the University of Nairobi in Kenya, Africa, where he produced a program that explored the evolution of black dance in America. He remained in Kenya for three years. He also served as artistic director for a chain of casinos in Africa.

When Jai was 13, a Salvation Army worker gave him a recording of “Amore Mio,” an aria from “La Traviata” by Giuseppe Verdi, one of the world's greatest operas. Twenty-two years later, after Chestnut had established himself as a first-rate dancer in Europe, he was commissioned to choreograph a piece of music at La Scala in Milan. What was the piece of music?

It was “Amore Mio” from “La Traviata.”

“When I saw that's what the music was, I cried like a baby,” said Chestnut. “I had chills ... It made me realize how far I had come, from the cotton fields of South Carolina to the world's greatest opera house in Italy. It's like the two ends of the earth ... My life has been amazing, even to me.” (Jai, who picked cotton until he was 12 and whose parents could not read or write, eventually learned to speak German, Spanish, French, Italian, Dutch and Swahili.)