Art Haywood by Pete Mazzaccaro For the first time in 10 years, the 4th Senatorial District of Pennsylvania has a new face: 57-year-old Art Haywood, an attorney and former Cheltenham Township … 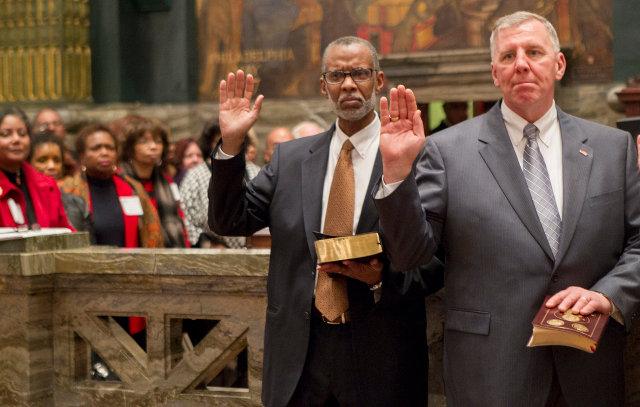 For the first time in 10 years, the 4th Senatorial District of Pennsylvania has a new face: 57-year-old Art Haywood, an attorney and former Cheltenham Township Commissioner who was sworn into office on Jan. 6 after winning the seat by a comfortable margin in last November’s general election.

Haywood wasted no time in getting started as a Senator. He set up an office in Roslyn, Abington Township, and got to work on his agenda. Before Christmas, before he had even been sworn into office, he held a press conference to announce plans to introduce legislation to require the state Attorney General to appoint a special prosecutor in the event of a death caused by police.

He also met with leadership at Arcadia University in Glenside to seek their support in working with Germantown’s Martin Luther King High School.

“I’m glad that match was made and hope it will be very productive,” he said.

Haywood was born and raised in Toledo, Ohio, where his mother and sister still live. After high school, he attended and graduated from Morehouse College in Atlanta, Ga., and attended law school at the University of Michigan.

After law school, he moved to Philadelphia to work for Community Legal Services, working mostly, he said, to both help homeowners avoid foreclosure and for governments to do more to promote affordable housing.

“It’s something I’ve always been interested in,” he said of his work in public law. “I’m interested in creating communities where people can thrive. I think that’s the big picture. I’ve been working at it since 1988.”

That interest made public office a natural fit. After working on the Obama campaign in 2008, Haywood said he felt compelled to run for office.

“I was inspired by the president and his call to serve,” Haywood said. “I decided it was time to step up.”

Haywood’s first elected office was a seat on the Cheltenham Township Board of Commissioners, which made him its president soon after his win in 2009.

Four years later, he beat embattled incumbent LeAnna Washington (who is currently facing corruption charges that surfaced before the primary) for her senate seat in the Democratic primary, assuring himself a general election win in a district that is overwhelmingly Democratic.

“As commissioner, it was clear to me what we needed from state government and what we were not getting,” he said. “In Cheltenham, we needed a lot of help with flooding. We had problems related to our sewer system. Funding for our schools is also an issue. A lot of solutions we needed are at the state level. The representation we had at the time wasn’t giving us what we needed.”

The issue foremost on Haywood’s agenda as he begins his first term in office is public education.

As a product of public schools and a parent of three children, Arthur, Olivia and Alexandra, all of whom graduated from Cheltenham High School, Haywood has devoted a lot of his energy on the issue. In 1994, he said, he and his wife, Julie, who is currently vice president of Cheltenham Township’s School Board, decided to move from Germantown to Cheltenham specifically for its schools. As a parent, he helped begin a tutoring program at the township’s Cedarbrook Middle School (grades 7 and 8).

Public Education, he said, is his top priority. It’s a problem that he believes requires both a legislative and a community approach.

“First, we need both adequate and fair funding of the schools,” he said. “So I’m looking at a fair funding formula. There’s a commission in the state to develop that formula. I’m looking closely at what it will take to make sure that it’s fair.”

On funding, Haywood said he would like to see the state’s share of education increase from one-third on average to one-half. He is also an opponent of vouchers and would like to see a different funding system for charter schools.

To that end, Haywood said he has been busy meeting with Boy Scout groups, churches and other institutions, looking for ways community organizations can support public schools. And he realizes that the work is not legislative.

“I think that the role of the senate has two sides,” he said. “One is administration, the other is community leadership. And that role is very important. And I think one of the things I have been able to do as a commissioner and hope to do as a senator is work as a matchmaker and bring resources in our community to where they are needed. Part of our challenge is to get those resources where they are needed. If we can continue to connect each other to what we need, we can continue to be successful.”

Beyond education, Haywood is interested in economic development and sustainability.

“I’d like it to be at least $10.10,” he said. “It’s going to be a challenge to even get to $10.10. If you raise people’s incomes and the minimum wage, you’ll sell more because people will have more money to spend. That’s not complicated economics at all.”

On sustainability, Haywood is also a realist. As a commissioner, he supported a sustainability plan for Cheltenham Township, but knows such a plan will not be as easy in the state.

“It’s going to be much more challenging,” he said. “I need to get a better sense of how the Wolf administration is going to go,. But it’s an important matter to the state. We need to be sure we have a place for our children and our grandchildren.”

Haywood said he currently is busy looking for an office in Philadelphia – the 4th District extends from Abington Township through Cheltenham Township and includes the Chestnut Hill, Mt. Airy and Germantown sections of Philadelphia. His current contact information for the Roslyn office: 1168 Easton Road, Abington, PA 19001. Phone: 215-517-1434; fax: 215-517-1439.