Manayunk’s new haunted house is an adaptation to flooding 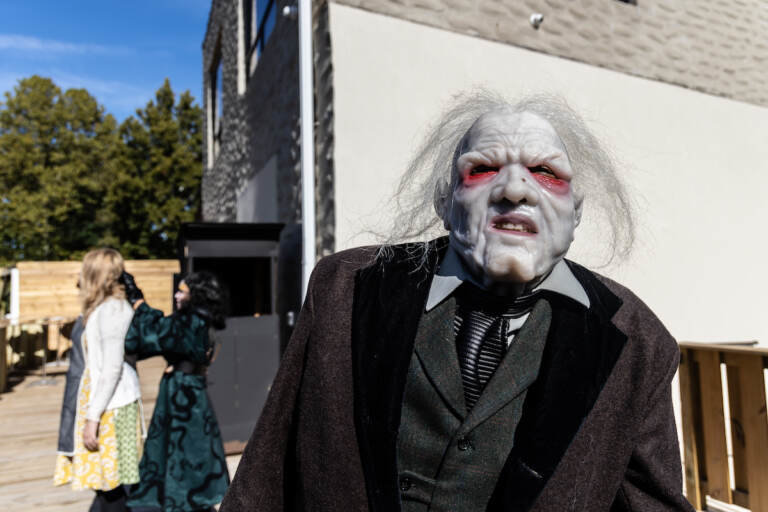 The main character of the Lincoln Mill Haunted House is Viktor Kane, the owner that experimented on and dismembered his workers.
Photo by Kimberly Paynter/WHYY
Posted Thursday, October 20, 2022 12:00 am
by Sophia Schmidt

When the flood waters receded from one historic building in Manayunk, they revealed a secret chamber under the basement. And in that chamber – countless bodies.

At least, that’s according to the fictional story of the new Lincoln Mill Haunted House, which opened in Manayunk on Thursday.

The haunted house is set in a real, old textile mill on Main Street, which housed the popular Mad River bar until it closed early in the pandemic.

For those who dare walk through the dark, winding hallways of the haunted house, each room slowly reveals the fictional story of a textile mill owner who performed gruesome experiments on his employees in the 1930s. Without giving away spoilers: There’s dismemberment, corruption, and twisted backstories.

As you creep around the blind corners, you’ll hear startling sound effects, and see plenty of gory props – like a real autopsy table from the early 1900s – and live actors. The creators of the haunted house say it takes about 15 to 20 minutes to get through, depending on how fast you run.

This haunted house wouldn’t exist if not for last year’s flooding from the remnants of Hurricane Ida.

Building owner Brian Corcodilos, who heads an architecture and design firm based in Manayunk, created the Halloween attraction alongside architect Jared Bilsak. The two used to host haunted house fundraisers together when they were in college.

When Corcodilos first bought the big, stone building on Main Street, he had other plans.

Floodwaters reached seven feet deep on the first floor – higher than ever before, Corcodilos said – and caused more than a million dollars worth of damage. The flood wiped out a commercial kitchen, elevator equipment, wood plank flooring, drywall, and the building’s entire back deck.

Corcodilos tried to find another bar or restaurant to rent space in the building, but every time an interested tenant came to look at the place, they would ask: “‘Where’d the water come to?’”

He would point up toward the ceiling.

“And you could see their eyes get a little big and go, ‘I don’t know about this.’”

So Corcodilos opted for a different business model that wouldn’t require so much permanent infrastructure, like a kitchen, that could get damaged in the future, as climate change increases the city’s flood risk.

Corcodilos made other changes to his building – like adding flood vents around the foundation and moving major electrical systems to the second floor. And he built what he calls the “concrete bathtub.”

The haunted house sits inside this concrete bathtub. Its maze-like walls are made of drywall, but they’re movable and temporary.

Bilsak and Corcodilos plan to have a new pop-up event each quarter, with themes like nightmare before Christmas or scary Valentine’s Day.

Corcodilos is keeping the space flexible — to accommodate whatever comes from the river.

The Lincoln Mill haunted house is open Thursdays, Fridays, and Saturdays through the first week of November.