Localite’s new game may help rescue them - To bees or not to bees: Lots of buzz about colony loss

Anaiis Salles, of Visualize World Bees (right), shows the Harper family of Mt. Airy her gameboard at her last free talk/game event at Awbury Arboretum on Feb. 9 in the Green Sanctuary Community …

Localite’s new game may help rescue them - To bees or not to bees: Lots of buzz about colony loss 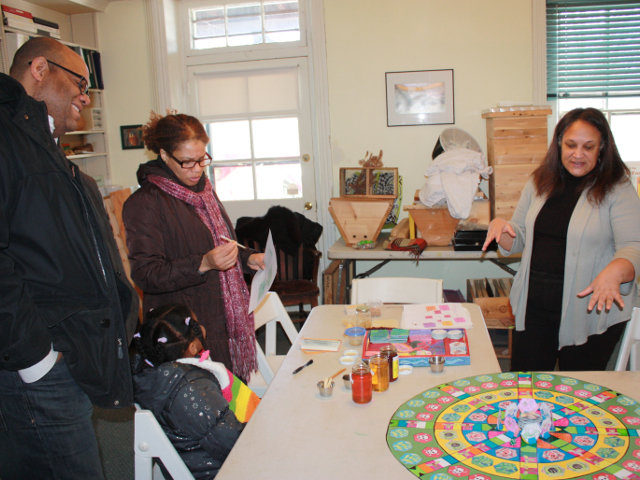 Colony collapse disorder, the sudden disappearance of worker bees from hives, was first noticed in North America in 2006. As the name suggests, the hive collapses, and pollination in the surrounding area ceases. No one is certain what is causing colony collapse disorder to occur, though recent studies from Harvard have pointed to the use of certain pesticides.

This reduction in the number of honeybees is worrying because pollination allows plants and flowers and crops to reproduce. They play such an important part in food production that almond farmers in California pay for bees to be shipped in from the East Coast to pollinate their crops every year because they don’t have enough (or lately, any) bees to do the job.

Germantown resident Anaiis Salles wants everyone to know the vital role honeybees play in our world. She has designed a board game, “Visualize World Bees,” to teach children about bees, their importance to our world and how to protect their habitats.

“I am a beekeeper, and I am enchanted by these wonderful little creatures who do such an enormous job for us,” she explained. “I’m also someone who grows food and am very aware of the connection between our bees and our food supply. I wanted to bring an opportunity for learning to young children so they might be able to make a difference as to whether or not we continue to have bees around to do this work.”

Salles, who requested that her age not be mentioned, has been an artist since she was a young child growing up in West Oak Lane. She attended the Philadelphia High School for Girls, which had a strong arts program at the time. She won a full scholarship for art to the Philadelphia College of Art. She won a number of competitions and worked in textile and fabric design for years. Working on this game provided her an opportunity to bring forward her painting and drawing skills again.

The game mat is a “mandala,” divided into sections that each represent a habitat (city, suburban, and rural). Players move around the board and transform the habitats from toxic to one where bees thrive and people have enough to eat. It is a cooperative game: no one wins unless everyone wins. This cooperation and teamwork are important because Salles wanted to incorporate how honey bee society works.

She was awarded a grant to design the game from the nonprofit Children Can Shape the Future, which supports educational opportunities for kids. Over the course of several months she brainstormed how the game might work. When she finished, she invited some friends over to try it out. But since she had designed the game with 10 to 11-year-olds in mind, she needed feedback from kids.

She approached the progressive Project Learn School in Mt. Airy, where her granddaughter attends 4th grade. Teacher Lisa Pack’s 4th grade class agreed to test out Visualize World Bees and give their opinions to Salles.

“Working with the kids was fabulous because they helped me with a great feedback loop,” said Salles. She received such valuable insight that she is looking to work with any other area schools that might be interested.

When Pack first saw the game, she thought it was beautiful. “The artwork is magnificent. I was excited about the cooperative learning experience. There was only enough room for the kids to play, but I found myself wanting to be a part of it.”

The 4th grade class played the game five times over the fall, and Pack has seen them excited each time. “They’re learning little things that they can do to help, how they can help keep bees alive. Whether it’s by planting flowers or convincing their parents not to put chemicals on the lawn. It’s not only about learning, it lets them take that information and change the world, even if it’s just one thing.”

The idea of empowerment is important to Salles as well. That’s where her “dandelion pledge” comes in. “Worldwide, there are approximately 40 billion acres of lawn. That is a sterile environment and does not feed a pollinating insect like a honeybee or a butterfly. After the game I ask the kids to make the dandelion pledge. Dandelions, which we call weeds, are a super food for bees and for humans. They go home and ask their parents not to use chemicals on their lawns to kill dandelions, because they’re food for the bees and if the bees die, there won’t be any food. I want people to make better choices straight through from the game to real life.”

She compared her efforts to teach people about the importance of bees to the learning curve that American society went through in regard to recycling. “We used to not know how to do that, and then we were made aware of the difference it could make. So we learned how to recycle, and now we do it and all sort of take it for granted. I think that can happen when it comes to bees because they’re so important.”

She licensed the game to her own nonprofit, Green Sanctuary Earth Institute of Pennsylvania, whose core goal is providing access to and supporting the production of safe, non-toxic, fresh food. She has a meeting scheduled with the Philadelphia School District to discuss incorporating the game into the curriculum. She is raising funds to meet with game manufacturers to translate the game into a family board game, and is working on a version for middle school students as well. She hopes to have the game ready for distribution to coincide with National Pollinator’s Week in June.

Salles has also written a children’s book, “The Day the Honeybees Disappeared,” and plans on several books for “big people.” She works with the Montgomery County Beekeepers Association (where she took her first beekeeping course) and created a community partnership with the Awbury Arboretum, which now has a public apiary, so that schools can arrange visits in the spring for kids to have interactive hands-on experiences with honeybees.

“It’s really important to understand that honeybees are really unique in the world,” said Salles. “Every activity they do makes the world a better place. I don’t think people understand the magnitude of what they do.”