Carole and Monsieur Herbert (right) visited the Peter Becker Community Home in Harleysville on Aug. 9. Carole gave an inspirational lecture “with the intention of trying to instill the will to live … 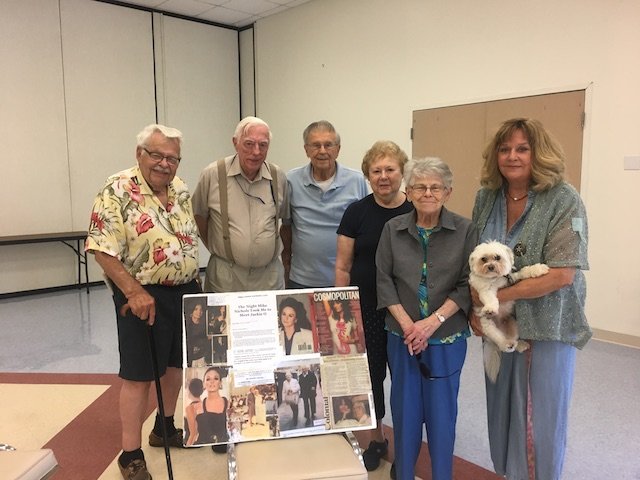 Carole and Monsieur Herbert (right) visited the Peter Becker Community Home in Harleysville on Aug. 9. Carole gave an inspirational lecture “with the intention of trying to instill the will to live after being sober 37 years. I have been a ‘Stepford Wife’ in the movie and in life. This series of lectures is part of my recovery.” (Photo by Chris DeVol)[/caption]

Carole Mallory's compelling stories make you feel like a member of the Smile High Club. The defining relationship of her life began in 1983 when she met the famous author Norman Mailer at New York's literary watering hole, Elaine's. Mailer was with his sixth and last wife (he had nine children), Norris, but his reputation for philandering and abusing women was legendary.

The Pulitzer Prize winner, whose “Naked and the Dead” may just be the greatest war novel ever written, had been briefly locked up in a psychiatric hospital in 1960. During a party celebrating his candidacy for mayor of New York, Mailer stabbed his second wife, Adele Morales, twice with a pen-knife in a drunken altercation, nearly taking her life, according to newspaper accounts at the time.

"Actually, I thought he was thoroughly charming," Mallory, now a 76-year-old Norristown resident, told the London Daily Mail. "I invited him out for a cheeseburger because I wanted him to read the manuscript of my memoirs. I'd taken writing classes, but I was struggling. I fell in love over that cheeseburger because he actually took time to read some chapters.

"A few months later, I was back in Hollywood. Norman called me each week for six months from New York to give me writing lessons. In one call he said he would be in Hollywood to promote his novel, 'Tough Guys Don't Dance.' He invited me to his hotel and told me to bring the manuscript. He threw it open to a random part, which happened to be the Warren Beatty chapter. He read it aloud, and we both got turned on. The next thing you know, we were in bed making love.”

Mallory, who has a carbonated personality and considered herself Mailer's unofficial seventh wife, insists the relationship was much more than physical. "He loved to read my words. He told me to forget acting and become a writer. He taught me so much. He made me keep a Roget's Thesaurus in the glove compartment of my car. He dared me to write a 50-page sex scene — it's in the Harvard papers (sold to Harvard after Mailer's death in 2007 at age 84) — and got turned on reading it.

“His wife knew about me but looked the other way as I was their tax deduction, and Mailer was $3 million in debt. She knew about me as she had to sign the tax returns … I would never have entered the relationship if I had not been jilted by Claude Picasso and my self esteem had not plummeted … But I wouldn't allow Norman to drink with me, and for nine years he was sober when he was with me. I even took him to AA meetings.”

In 1988, Mallory published a novel, “Flash,” about a young promiscuous woman in search of fame which she insists was pure fiction. Mailer wrote a blurb for the book cover, describing it as “wickedly funny.” Carole acknowledges that Mailer was not faithful to her during their nine-year affair, claiming the boastful male chauvinist had a "polygamist's heart, and I'm sure he had other relationships. Towards the end, he became monstrous and controlling."

Mallory now speaks before attentive audiences at area retirement homes about her background as a magazine cover model, movie and TV actress, author and intimate of many movie stars. On June 28, 1987, when Mallory's story of overcoming alcoholism was the cover story of Parade Magazine, she was asked to speak at her alma mater, Penn State University, for a D.U.I. convention of mothers who had lost children to drunk drivers. (Mallory has been sober for 37 years.)

An actress in eight Hollywood feature films and two documentaries, Mallory has also taught at Rosemont College, Cheltenham Adult School and Widener University. After Mailer told her to quit acting, she went on to study writing at UCLA, NYU and Columbia University. After Mailer's death, she sold seven boxes of documents and photographs to Harvard University, including extracts of her letters, books and journals.

Mallory's storybook life was as complicated as putting together a piece of IKEA furniture. In all of it, what was the hardest thing she ever did? “Watching my mother die when she did not want to at age 100. She loved my care, and I loved caring for her. Also deciding to allow a surgeon to give me a brain operation in 2013 after what surgeons had done to my father. After a stroke, it was discovered I had hydrocephalus (water on the brain) and needed a shunt implanted in my brain. I fought, met with three surgeons and finally threw in the towel by choosing Dr. Andrews at Jefferson Hospital, who saved my life. Today I am spry and grateful most days.”

If Carole could meet and spend time with anyone on earth, living or dead, who would it be? “My mother, who was a farmer from Shoemakersville, PA, and the oldest of 12 children. I would welcome a conversation with her ghost and to continue to make amends because she had wisdom and character that I was unaware of when she was on earth.”

For more information, visit www.carolemallory.com. You can reach Len Lear at lenlear@chestnuthilllocal.com