Mikey Robins, owner of a local event planning and catering consulting firm, is a TV reality show veteran. When Mikey had just turned 14, he became the youngest winner ever on the Food Network show, … 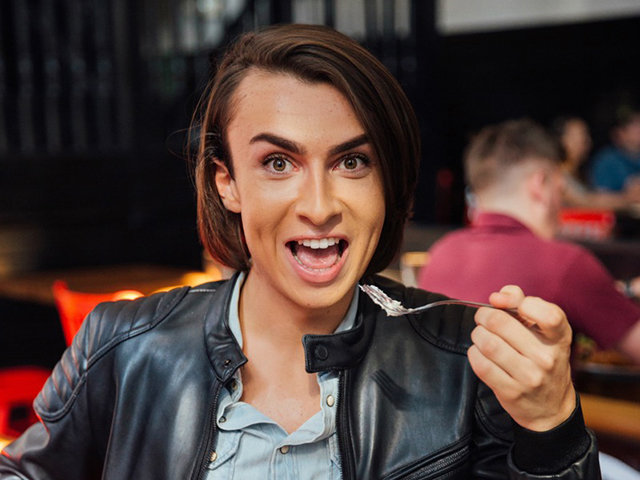 Mikey Robins, owner of a local event planning and catering consulting firm, is a TV reality show veteran. When Mikey had just turned 14, he became the youngest winner ever on the Food Network show, “Chopped.”[/caption]

Mikey Robins is just 19 years old, but the Germantown Academy graduate (he won't say what year he graduated) who grew up close to Chestnut Hill (he won't say what town) has already spent more time on TV food shows than all but a few celebrity chefs.

Robins, who already owns and operates an event planning and catering consulting firm, Events by Mikey, was the team captain in recent months on the Food Network show, “The Great Food Truck Race.” Robins and his team members, fellow Germantown Academy alumnus Taylor Randolph and Ambler resident and Wissahickon High School grad Ashanti Dixon navigated culinary road blocks and fed hungry crowds in cities from New Orleans to Savannah, GA, competing for a $50,000 grand prize. The team did not win the grand prize, but they came in a very respectable third place.

Although you would think Mikey's accomplishment was quite impressive for a 19-year-old, the fact is that this was not his first TV rodeo. He has also appeared on Food Network’s “Chopped” and “Kitchen Inferno.” In fact, when Mikey had just turned 14, he became the youngest winner ever on “Chopped.” How on earth is such a thing possible?

“I come from a really big family of home-cooks, foodies and at-home entertainers,” he told us in an interview last week. “I also say I was basically raised in the kitchen, the heart of any home in our family. Between all the holidays, birthdays and milestone celebrations, I have vivid memories from a very young age of being in the kitchen and helping out with all of these events for the ones I love.”

What were Mikey's most difficult challenges on these TV food competition shows? “The most difficult thing about competing on any Food Network or food-related competition series is the unknown, whether the unknown is a secret mystery ingredient on 'Chopped' or navigating through an unknown city while operating a food truck on 'The Great Food Truck Race.'”

Mikey's earliest food memory is at age 3 or 4 helping his mother make congo bars (chocolate-chip blondies). The youngest of four children, Mikey might have had a slight advantage over his TV competitors since his parents, Kevin and Linda Robins, used to operate a Young Chefs Academy in North Wales, and the family has two kitchens.

Mikey did not go to culinary school, but he did complete the "Event Leadership Executive" certification program at Temple University, which has been beneficial to him in his field of private event/catering management. Several years ago he started Events by Mikey because “event planning and entertaining is such a huge passion of mine, and it was amazing to transform that passion into a brand.” The company employs several freelance event producers and freelance event staff.

Robins' company has become known for handcrafting its events to fit their clients most elaborate requests. “I love to be a part of 'out-of-the-box' events,” he said, “whether it's a divorce party or a boutique opening. I'm beyond passionate about events that aren't everyday occasions.

“When I was able to infuse my love of food and passion for entertaining into a career, I knew it was the kind of work I would be doing for the rest of my life. Being a part of these special events for clients is something that makes this career so rewarding.”

Mikey's ultimate goal is to create a lifestyle brand like Rachel Ray, and it would not surprise anyone who knows him if he achieves it. “Rachel Ray is surely an inspiration of mine,” he said, “with such a strong brand with many different facets to it, definitely a brand I love and a chef I admire.”

What was the best advice Mikey ever received? “It is that if something is not going to matter in five years, do not worry about it for more than five seconds. It is easier said than done but truly essential in order to live in the moment and take advantage of the present.”

What was the hardest thing Mikey has ever done? “Deciding to forgo a formal college education to launch my own company and personal brand.”

What is Mikey's biggest pet peeve? “Excuses! Everyone, including myself, is guilty of using excuses as reasons not to do something or why something will never happen, but I feel that without excuses anything is possible with passion, hard work and tenacity.”

Mikey Robins will soon have a new online web-series, "Brunch Bites with Mikey Robins," where Mikey picks some Philly hotspots on his hunt for the area's best brunch. It will stream exclusively on his new YouTube channel and at his website, TheMikeyRobins.com. His social media handle is @Mikey_Robins.