This is the cover of Iva’s mini-album, “Leap,” which was officially released last month.[/caption] by Len Lear Emily Samson Tepe, who goes by the stage name Iva, is one of those people who seem … 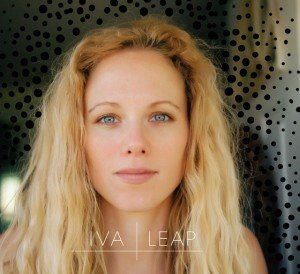 This is the cover of Iva’s mini-album, “Leap,” which was officially released last month.[/caption]

Emily Samson Tepe, who goes by the stage name Iva, is one of those people who seem to have everything. Possessed with a stunning combination of beauty, brains and talent (when asked her age, she replied, “I'm as young as the universe; 37 in human years.”), Iva went to the Juilliard School of Music in New York, “the Harvard of music schools,” and then graduated from Princeton University as a pre-med student. She passed up a potential career in medicine (she wanted to be a doctor for vocalists), however, to pursue a career as an opera singer. (“Also, Organic Chemistry just about killed me.”)

Thanks to a Fulbright Scholarship for Performing Artists, Iva moved to Sweden, where she soon found herself singing with the Royal Opera of Stockholm. (Her ethnic heritage is Swedish.) But Iva made a sharp turn from opera to pop music, releasing two pop records in Sweden, the second for Universal Records.

Why did Iva switch from opera to pop? “When I was studying at Juilliard,” she told us last week, “I was invited to sing on the Conan O'Brien show as part of a comedy sketch. Max Weinberg (Conan's band leader as well as the drummer with Bruce Springsteen's E Street Band) liked my voice and invited me back.

“This led to me eventually meeting a producer at the Conan Christmas party who had some tracks he wanted me to hear. I went over and tried putting vocals and lyrics on a few, and it just clicked. Then I started writing more and more with popular songwriters, as well as on my own, and I realized I really had something to say. That prompted me to devote more time to developing who I was as an artist.”

Iva has performed many times in the Delaware Valley such as at the Barnes Museum, Old Swedes Church, The Delaware River Waterfront, World Cafe Live, Doc Watson's in Exton and Burlap and Bean Coffeehouse in Newtown Square. A Kickstarter-funded mini-album, “Leap,” that she recorded was officially released last month and has received airplay on WXPN in Philly, WSTM-FM in Wilmington and the Corporation for Public Broadcasting's “Under Currents,” among others.

Iva's voice has a haunting, soulful, seductive quality, despite the fact that she was turned down when she auditioned for “The Voice,” the most watched singing competition show on TV. Billboard Magazine has commented on her versatility, touting her as an artist to watch who was “doubling up in Sweden” between opera and pop. The Tri-State Indie said about her, “Keep your eyes open for this remarkable crossover talent . . . she’s the real thing.”

Past honorees, including iconic astronaut Buzz Aldrin and movie star Ann Margret, have been honored with a golden plaque, diploma and their name added to the commemorative Swedish American of the Year tablet, kept in the city of Växjö. “Iva’s Swedish heritage can be traced back to her hometown in Philly,” we were told.

The genesis of the award was a cover article in “Sweden in America” magazine last December. Tommy Hellstrom, the journalist who wrote the article, nominated Iva for the “Swedish American of the Year” award.

“A little while later I was told I’d been given the award, which was a real lift,” said Iva. “I was surprised to have been given such an honor ... As everyone knows, our work is not always easy, and when someone recognizes what you are doing, it makes it all worth it.”

Iva, who also plays the piano, has considered moving to Sweden permanently, but she said she would miss her family and friends too much. She goes there as often as possible, however. She has been back there twice this summer, and she also toured Poland and Germany in June, singing classical music in spectacular castles and cathedrals in all three countries.

When asked what living person she would most like to meet and have a conversation with, she replied, “There are too many to count, but I would love to meet David Bowie and talk to him about his recording process from the '70s, maybe even write a few songs with him. He is a genius.”

Iva's next performances in this area will be on Sept. 10 at World Café Live @ the Queen in Wilmington and Oct. 10 at Melodies Café in Ardmore. To hear her sing, check her videos out on YouTube, or visit her website at ivavoice.com.