Remo Saraceni is seen with his most famous creation, the “Big Piano,” that he made for the 1988 movie “Big,” starring Tom Hanks and Robert Loggia (seen in background). When you step on the … 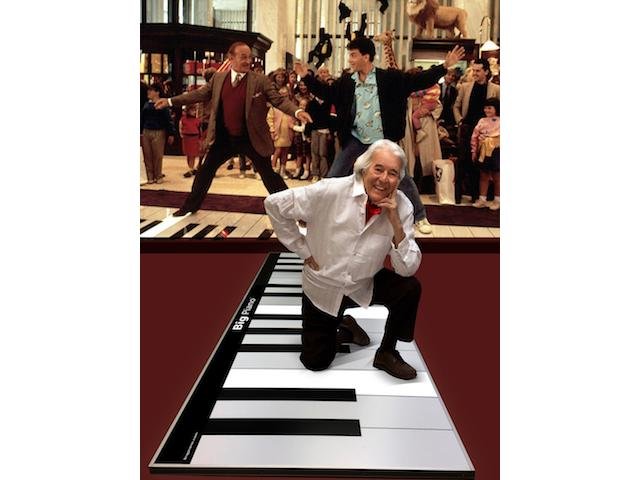 Remo Saraceni is seen with his most famous creation, the “Big Piano,” that he made for the 1988 movie “Big,” starring Tom Hanks and Robert Loggia (seen in background). When you step on the lighted electronic keyboard, it plays music.[/caption]

Saraceni, 83, who grew up in Abruzzo, Italy, earned a master’s degree in electronics from the Technical Institute of Milan in 1958 and came to the U.S. in 1965, where he worked for the U.S. space program from 1965 to '69, utilizing micro-electronics for rocket re-entry systems.

“At that time,” the area resident explained, “micro-transistors/integrated circuitry (the precursors to microchips) were just being invented/developed. While a modern computer chip (intel pentium, et al) has billions of transistors, back then you could solder each of them by hand. My assembly techniques were adopted as the standard for the project.”

Even as a child, Remo was always interested in creating things. “In Italy during and after the war, if you wanted a toy, you had to make it. My father was questioned because I made a kite with a Mussolini poster!”

Remo came to the U.S. for the World's Fair in New York City, although he had "no English, no friends, no money and no permission to stay. At the time Philadelphia/Valley Forge was America's Silicon Valley, and I was looking for work in the hi-tech sector, which I eventually found.”

Saraceni eventually became a world-renowned engineer and lighting designer, but the thing for which he is best known was his invention of the “Walking Piano” that was a hallmark of the major motion picture “Big” (1988), starring Tom Hanks. In the movie, Josh Baskin (Hanks) impresses the owner of a toy company (Robert Loggia) with his insight into current toys and his childlike enthusiasm. The two men proceed to play “Heart and Soul” and “Chopsticks” by dancing on the keys of Saraceni's invention, the 16-foot, foot-operated lighted electronic keyboard, on display in F.A.O. Schwarz toy store in New York City. Since then, versions of the piano have been installed in museums, children's hospitals and other public places around the world, entertaining millions of fans, even to this day.

How did the step-on-to-play piano come about? “I created a musical daisy for the Bicentennial (design for fun). From there the concept grew; it took shape with an intermediate stop at an interactive futon, and the first 'Big Piano' was built in 1982.” The piano was on display at the F.A.O. Schwartz toy store in New York City when famed movie producer/director Steven Spielberg's sister saw it and told her brother all about it. The rest is film history.

In the 1970s, Remo started an interactive design company called Museum Interactive Technologies. It is still in business more or less as Big Piano Technologies. Aside from the “Big Piano,” they do custom projects for children's museums, play-spaces and other clients.

Most recently at Miami Children's Museum they installed an interactive music gallery featuring a video karaoke booth that emails your performance to you; a hands-on melody maker with 16 physical notes one can arrange in a composition, a “Big Piano,” Musical Stairs, Musical Clouds and Interactive Symphony. “There is a room with a full 20-section symphony on the floor. When you step on each instrument, the instrument panel lights up and starts playing in sync with the backing track, and the sound comes from the floor!”

Saraceni, who holds dozens of patents, had hoped to market a version of the "Big Piano” to the public, but a plant owned by the Chinese government stole his technology and produced a version at a price he couldn't match. He sued the American toy company that was distributing the Chinese product for trademark infringement, and they settled out of court in 1994.

The “Big Piano” is just one of Remo's many interactive creations that connect the imagination of childhood with the technology of the future. Remo's unique combination of scientific intellect and creative capital have earned him the description "high-tech Renaissance Man." Remo's credentials also include works on display in science and art museums around the world.

One of Remo's commercial successes was the Light-O-Matic wall switch, a great energy saver because it controls lights automatically. “Coming from Italy, we never left the lights on,” said Saraceni, “because wasting electricity was too expensive. Here everyone left the lights on, all day and night. I wanted to change that.”

Remo, who currently lives in Narberth, has a patented lighting efficiency concept for shopping centers, and he is currently working on a “Musical Cloud,” which he calls “a revolution in lighting and audio design.” It will enable the listener to hear an infinite number of songs. It will soon be available on Remo's website, Musicalclouds.com.