David Jackson Ambrose, a resident of East Falls and author of the powerful new novel, “State of the Nation,” is seen here reading from the book on May 5 at Wooden Shoe Books, 704 South St. More … 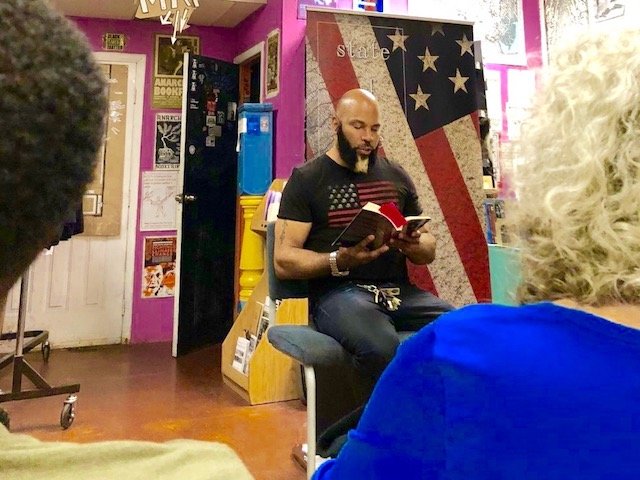 David Jackson Ambrose, a resident of East Falls and author of the powerful new novel, “State of the Nation,” is seen here reading from the book on May 5 at Wooden Shoe Books, 704 South St. More information at www.davidjacksonambrose.com.[/caption]

David Jackson Ambrose, a resident of East Falls and author of a powerful new novel, “State of the Nation,” signed copies and read from the book on June 16 at Big Blue Marble Books, 551 Carpenter Lane in West Mt. Airy. Here is the second part of our interview with him:

•You have said that pop culture glamorizes difference. Very interesting. What is the effect of that (and social media) on young blacks?

“It is a very dichotomous arrangement. But it is really no different than the effect the media and American culture has had on the rest of the world.  It shows this myth that communicates a way of life that does not even exist but that everyone attains to. It shows us a very glamorized diversity, too. Like all the non-white people are these biracial beings with auburn curly hair, and they move in this very accepting environment (Target, Cheerios, H&M commercials), and so we think America is very diverse and accepting, but our everyday existence tells us it is not. America takes care of us but also excludes us. I think Chris Rock described it best. He said our relationship with America is sort of like that uncle who used to molest you but also paid your tuition at college.”

•What are the ramifications of the Trump era on Black America? (Trump followers would certainly say they are not racists. I recently heard Bill Maher say that there are two things most Trump followers hate: racism and black people.)

“Really, I find it heartbreaking. White Americans, at least poor and working class white Americans, have been just as conditioned to this paradigm as African Americans are. It’s in our genes. It’s the legacy of capitalism. Racism had to exist in order to justify slavery, which had to exist in order to create what has become the most powerful, most wealthy country ever. America was constructed on the backs of slave labor. Trump is nothing new. He is the same as it ever was.

“Obama was a dream that all white Americans dreamed of for themselves as this totally accepting, non-racist citizen ready to step away from the shadow of its racist past. However, once that man stood in office, looking so beautiful and clean, with his beautiful children and his beautiful wife and their pedigree that most white Americans cannot even compare to, it brought about a tremendous self-hatred that, as racism has always done, manifested itself as hatred of the other rather than an acknowledgement of feelings of inferiority.

“I really say that Obama is the reason that Trump has ascended to the office. He would not have been considered as a valid choice had the perfection of Obama not been in place first.

“So, while this change seems too pivotal to white Americans, for older blacks, this is nothing new. Now younger black kids, this might be new for them, and they have the power to make a change. They are using social media to broadcast civil unrest and police acts of terror. This is different than when broadcasts of civil disobedience were available during the civil rights era because now the power to disseminate these images is not always in the hands of those few in positions of power, and so grassroots efforts are able to make significant changes in ways that they haven’t before.”

•What writers, past or present, do you admire the most?

•What is the best advice you ever got?

“Shut up and listen. You don’t know nearly as much as you think you do.”

•What is the hardest thing you have ever done?

“Walk out my door each day. Present at the NCTE (National Council of Teachers of English) a month after burying my mother.”

•If you could meet and spend time with anyone, living or dead, who would it be and why?

“Salvador and Gala Dali. Can you imagine? He was so creative. And Gala was so rude. I read that if you asked to use her bathroom, she would assault you because she thought it was rude to use other people’s bathrooms … I LOVE THAT! Anna Nicole Smith. She seemed so sweet. Joan Crawford. She did not. Bette Davis, Josephine Baker, Eartha Kitt, James Baldwin, Diana Vreeland, The Mills Brothers, The Andrews Sisters, The Chordettes, Black Betty (the 17th century black prostitute rumored to be the muse for the song), Harriet Tubman. Man, there are so many; I just better end this now!”