Allison O’Kelly, 42, of Fort Washington, seen here with her three sons (ages 12, 10 and 4), is the founder and chief executive officer of Mom Corps. (Photo from momcorps.com website)[/caption] by … 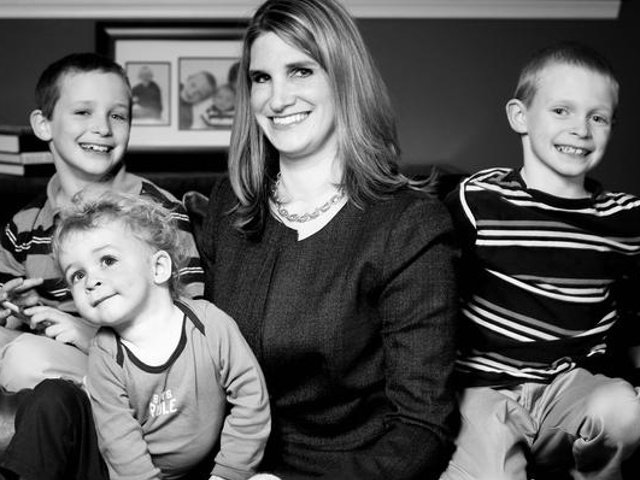 Allison O’Kelly, 42, of Fort Washington, seen here with her three sons (ages 12, 10 and 4), is the founder and chief executive officer of Mom Corps. (Photo from momcorps.com website)[/caption]

Mom Corps was founded in 2005 with a dual goal: to provide professional flexible work opportunities primarily for women who are raising young families and to help companies recruit and retain talent. The company has been featured on the Today Show and CNN and in the Wall Street Journal, Forbes and other publications.

Born and raised in Maryland, Allison received a bachelor’s degree in business administration from the University of Georgia in 1994. She then worked in Atlanta for four years before attending Harvard Business School, where she received a master’s degree in business administration in 1999. At Harvard she met her husband-to-be, Shane, who is also a business executive. The family moved to Fort Washington four years ago.

After graduate school, Allison was accepted into the management training program at Toys “R” Us, where she worked from 1999 to 2004. She helped the company launch its e-commerce business, then worked at stores in New Jersey and Atlanta.

Allison said that starting her own business wasn’t the result of a big “a-ha” moment. When she started having children and was looking for a more flexible work arrangement, she set up her own contract accounting practice. “It wasn’t my end goal to start a business. I kind of fell into it,” she said. With more work than she could handle, she began to farm assignments out to friends and other contacts. “I quickly figured out that that there was an opportunity to make this bigger than me and my friends.”

Establishing and building the business was a relatively quick process. “It took about a year and a half from when I started doing contract work to when I rebranded and named the business Mom Corps. I didn’t do a business plan or go out with a dog and pony show for an investor. I just made it happen.”

Originally, Allison wanted to call the company Mom Force because “I wanted the name to reflect a force of tough women who are out there working hard. I loved the idea of using the word ‘Mom’ in the company name because I thought people would ask questions about it, if nothing else. But the Web address for that name was already taken. My husband, a veteran U.S. Army Infantry Officer, came up with Mom Corps.”

Allison was also inspired by her own family history. Her father died when she was a teenager, and her mother suddenly found herself an unemployed widow. “My mother didn’t know if she would be able to get back into the workforce. The family finances were foreign to her because my dad had handled it all. It took her about a year to get back to work. A year doesn’t seem like a long time, but it was incredibly stressful for her.”

Here’s how Mom Corps works: Job seekers go to the website (momcorps.com) and apply for specific jobs that are posted there. “We encourage people to register on the site so that we can reach out to them if something comes up that matches what they are looking for. They can also sign up for our weekly emails.”

These services are free for job seekers. Additional services, available for a fee, include small group coaching sessions, direct access to recruiters, etc. “Nearly 200,000 people have submitted their resumes to us over the years, and we have placed thousands of people in jobs. It’s hard to know the exact numbers.”

So how does this busy CEO and mother of three balance her own work/life situation? “I feel that I have the ultimate flexibility; that’s what I was looking for. Is it easy? No. Are there moments and days that are crazy? Absolutely. But for the most part, most days are pretty balanced, and that’s what’s important to me.”