Dr. Sattilaro’s book, “Living Well Naturally,” one of two he wrote about overcoming cancer, was a best-seller in the 1980s.[/caption] by Len Lear Since I have been a full-time reporter/editor … 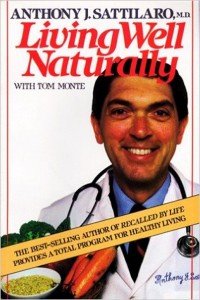 Dr. Sattilaro’s book, “Living Well Naturally,” one of two he wrote about overcoming cancer, was a best-seller in the 1980s.[/caption]

Since I have been a full-time reporter/editor for almost 50 years, once in a while someone will ask me who is the most compelling or unforgettable person I have ever interviewed and written about.

I am not sure he is number one, but Dr. Anthony Sattilaro is definitely at or near the very top. I interviewed Dr. Sattilaro in February of 1981 when he was 48 and the president of Methodist Hospital (where I was born) in South Philadelphia. In June of 1978, he told me, X-rays revealed that he had cancerous growths in his skull, right shoulder, prostate, backbone, sternum and genitals.

Three operations, huge quantities of oral drugs and large doses of estrogen, a female hormone, failed to arrest the cancerous spread. Dr. Sattilaro was told he had about one year to live.

Two months later, tragedy struck again as Dr. Sattilaro's father suddenly died. After burying his dad in Highland Park, NJ, on Aug. 9, the deeply depressed physician was driving down the New Jersey Turnpike to Philly when a miracle occurred.

Although it was completely out of character for him, Dr. Sattilaro picked up two young hitchhikers — Sean McLean and Bill Bochbracher — who were on their way to North Carolina. “It was a spur of the moment decision,” he told me. “I guess I just needed somebody to talk to.” When the prominent physician told the young men that his father had just died and that he himself had been given a cancerous death sentence, McLean made a comment which Sattilaro told me saved his life.

The youthful hitchhiker remarked, “You do not have to die. Cancer is not all that hard to cure. You can do it.”

“I looked at him,” said Dr. Sattilaro, “and thought he was just a silly kid. Here I was, a doctor for 25 years and the director of a Philadelphia hospital with lots of cancer specialists who had done everything they could possibly do for me, and nothing could arrest the spread of my cancer.”

McLean proceeded to urge Dr. Sattilaro to stop in at the Philadelphia East-West Foundation, which was then located at 820 South St. There he could learn how to prepare a macrobiotic diet, which McLean insisted had “cured” many forms of cancer. McLean later sent the doctor a book, “A Macrobiotic Approach to Cancer,” containing many testimonials from cancer patients who insisted their tumors gradually shrank and eventually disappeared after adopting a strict macrobiotic diet.

At first Dr. Sattilaro thought the whole thing was ludicrous but later told himself, “What do I have to lose? I only have one year to live.” So he went to see Denny Waxman, a Northeast Philly native who was then the director of the East-West Foundation. When I called Waxman, he said, “I recommended that Dr. Sattilaro take our cooking classes and instruction in the macrobiotic way of life.” (Waxman is also the author of “The Complete Macrobiotic Diet: 7 Steps to Feel Fabulous, Look Vibrant, and Think Clearly.")

To be sure there was no deviation from the diet, Sattilaro began eating his meals at Waxman's house. Within two weeks, the physician's excruciating pain was completely gone, and he was able to stop taking his morphine, cocaine and Compazine pain-killing medications.

The Methodist Hospital director continued to show improvement, although it was very difficult for him to stay on the extremely rigid and restrictive diet. Like most Americans, Sattilaro was used to consuming large quantities of meat, coffee, sugar and processed, chemical-laden food — all strictly forbidden by the macrobiotic diet.

In September of 1979 — 15 months after starting on the macrobiotic diet and four months after he stopped taking estrogen shots (against the advice of his own oncologist), a bone scan and gamma camera showed Dr. Sattilaro's body to be totally free of cancer.

“It was a miracle,” said Dr. Sattilaro, who twice invited me to his office at Methodist Hospital, where he made some of his favorite dishes for me like miso soup and tofu with vegetables. (They were really bland.) “Whenever you write about this,” said the cancer survivor, “you have to mention the following two things: first of all, I would never, never advise any cancer patient not to follow traditional medical treatment for cancer, chemotherapy and radiation. My macrobiotic diet was a last resort after chemo and radiation failed to work.

“Secondly, I would never, never, never claim that a macrobiotic diet is a 'cure' for cancer. There is absolutely no evidence for that claim, which some people do make. You would have to have a massive, double-blind, controlled study for years to be able to assert such a claim. I would like to undertake such a study, but as for now, my case is just anecdotal. I cannot even say with absolutely certainly that the diet actually caused the cancerous tumors to shrink and disappear. There may be other reasons that we will never understand.”

The year after I met Dr. Sattilaro, he wrote a book, “Recalled to Life” (Avon Books), which became a best-seller. To promote the book, the Philly physician went on a national tour, which included an appearance on TV with Oprah Winfrey and other talk shows. Three years later he wrote a second book, “Living Well Naturally,” in which Dr. Sattilaro wrote that his doctors had pronounced him in a state of permanent remission.

"As with most physicians,” he wrote, “my medical training did not include the study of nutrition … Unfortunately, though, our diets have changed radically within the last 50 years, with great and often harmful effects on our health. In all, six of the 10 leading causes of death in the U.S. have been linked to our diet."

After several years of being cancer-free, Dr. Sattilaro, apparently bored and frustrated with the extreme strictness of the macrobiotic diet, gradually went off the diet and began eating the typical American diet again. Unfortunately, in the late 1980s his cancer returned, and he died in 1989 at the age of 56. One report said he died of pneumonia, although others said the cause of death was prostate cancer.

Dr. Sattilaro's books can be obtained through amazon.com