“Angry, Young, Bored” is a characteristic piece by West, who went to Cardinal Dougherty High School “with an amazing art teacher who encouraged me to keep drawing demons at a Catholic … 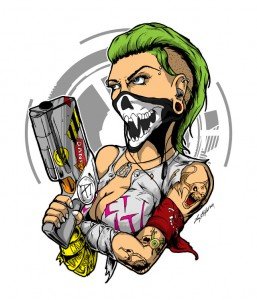 “Angry, Young, Bored” is a characteristic piece by West, who went to Cardinal Dougherty High School “with an amazing art teacher who encouraged me to keep drawing demons at a Catholic school.”[/caption]

Visit the Malelani Café at 6734 Germantown Ave. in Mt. Airy anytime between now and June 6, and you will see art work on the walls that just may blow your mind.

“Unarmed Black Male” is a solo exhibit featuring the stuckism/pop-art work of illustrator and designer Larry West, 30, a lifelong Mt. Airy resident with a 4-year degree from the Hussian School of Art whose latest work has been motivated by the recent wave of shootings of unarmed black males.

“As a fellow unarmed black male,” West said, “I wanted to show the world that we don't have to just be statistics. We can be amazing artists, designers and productive members of society. Granted, the current news doesn't show that, so I figured it was about time to show the other side. Do black lives matter only when the person is dead, or are we going to support them when they're alive?”

West's style has focused on skewing contemporary society, and “Unarmed Black Male” is the latest example of this. The show features over 20 pieces that range from his take on recent protests and religious movements to pop culture. His clients have included Megadeth, the Ron Paul Presidential Election Campaign, Dancing Ferret Converts, the Admiral Theater and more. Always controversial and never safe, Larry's sought-after, award-winning work has been featured in Rolling Stone magazine and the book “The Art Of Metal.”

According to Ray DeJohn, the Local’s production manager and a brilliant illustrator himself, “West’s work in phenomenal. He has a unique style, very detail-oriented and eye-catching. He has excellent line work and color highlighting, very hip. Everything pops!”

Here are some questions we recently put to Larry and his answers:

How do you decide on a price to put on each piece of art?

Normally I ask Satan how much soul is left to me, and that's when he reminds me that most of it was sold to Rock and Roll. At that point, I look at what is left and how much work went into a piece of work. Then I realize I'm just selling amazing one-off prints, and I price them to sell. 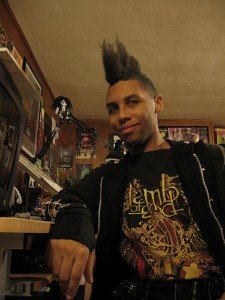 Mt. Airy resident Larry West is a supremely talented illustrator whose work is currently on display through June 6 at The Malelani Café, 6734 Germantown Ave. in Mt. Airy.

What high school did you go to?

I'm a Philly guy through and through. I went to Cardinal Dougherty High School with an amazing art teacher who encouraged me to keep drawing demons at a Catholic school.

Did you always want to be an artist?

Well, not when I first was out of the womb but shortly after. I knew I wanted to draw when I was in grade school. I just liked drawing more than anything else, and I grew up admiring a cousin of mine who worked on a ton of animated series. I wanted to have a life where I was happy with what I did for a living.

Did you try any other types of art before deciding on pop-art?

I tend to say I do “pop-art” since I like drawing things in a certain style, and admittedly it’s largely because I just get sick of people saying, “Oh, you draw comic books.” I've also done some more representational and surreal styles. But, to me, anything you do is pop-art since it’s part of the modern culture. I have a few pieces in this show that border on surrealism but with pop-art overtones.

I’ve seen your work called "award-winning." What awards have you won?

Curses, foiled again! I've won a few art contests, or at least come in second. I came in second in a concert poster contest for Machine Head in 2005, and I won the Ruth and Bernard Memorial Award in college.

I try not to get too esoteric, but I really just consider myself a guy who draws. I definitely do commercial art, which helps to get bills paid, but I tend to make them matter to me, and that's where the art really is. I think “fine art” is simply anything you do that you love and are passionate about. The biggest problem I had for a while was just making art that I thought would sell. In a 2013 solo show I did, I actually realized how bad it had gotten, and since then I just do what I like and see if it makes sense to try and sell later. It can't determine what you do as an artist 24/7; otherwise you're never going to be happy, and your work is going to suck.

What is your ultimate ambition? Is it to have shows in major galleries and museums?

World domination. Other than that, I would like to have a show in a major gallery. I've had an idea for doing a “Demonic Goddess” art show for a couple years, but I would need a nice space for a solo show to do it. In fact, a few pieces from that idea are in this show. I think the greatest thing would be to have an art show at the Philadelphia Museum of Art with all the artwork I've done that people said would never get my anywhere. But I also want to do make my own comic book and make an animated series. The only problem with an ultimate goal is, well, where do you go from there? I like to have multiple goals, so there's always something to do. 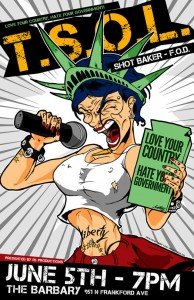 Larry created this promotional poster for a 2011 gig at a club on Frankford Avenue by a rock band called TSOL.

Where do your ideas come from?

Neurons in brain cells that haven't been killed. I think. It usually comes from a passion for one thing or another, either love of a woman or anger at a situation to frustration with politics and esoteric thrill about a new idea of concept. For example, the artwork on the poster of my show was inspired by my just wanting to run around shooting Nerf guns at my friends and looking like a bad-ass when I did it. And then I thought about who would look sexy doing it. When I realized it wasn't me, I decided to go for a girl with a green mohawk and a face mask. It's all about trying to create a view of the world I like.

Do you consider yourself a political artist?

Sometimes I consider myself a political artist. I know I did during Occupy Philly, and I love doing political-based art a lot. But social satire and pop-art are so closely related and downright intertwined with political art and vice-versa that it's hard to nail it down.

What are your favorite books?

“The Trial” by Kafka; “Animal Farm” and “1984” by George Orwell; “A Clockwork Orange” by Anthony Burgess, and “Brave New World” by Aldous Huxley, which is the scariest thing I ever read. Huxley basically predicted how humanity and society would progress to today, which is shocking and sad.