Vashti DuBois is the founder and executive director of The Colored Girls Museum, 4613 Newhall St. in Germantown, which helps to redress the frequent disregard of black women’s lives and labor. … 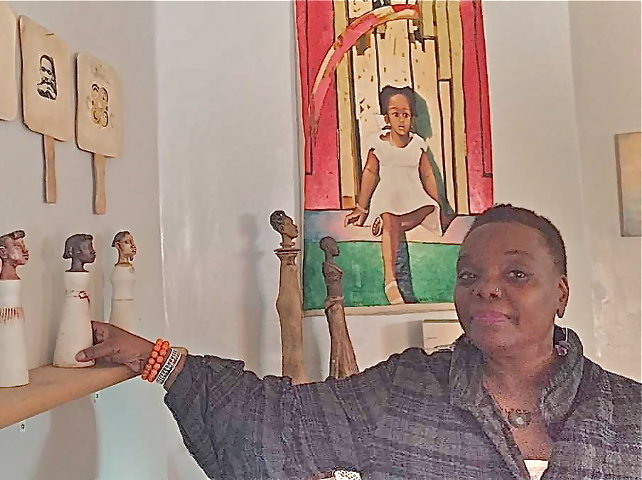 Vashti DuBois is the founder and executive director of The Colored Girls Museum, 4613 Newhall St. in Germantown, which helps to redress the frequent disregard of black women’s lives and labor. (Newsworks photo)[/caption]

Consider what America acknowledges with Mount Rushmore’s huge portraits of Washington, Jefferson, Theodore Roosevelt and Lincoln. Then think about what those 60-foot granite images leave unsaid: that the Founding Fathers might have governed with wrinkled clothes, dirty drawers and untended children if black women — sometimes enslaved — hadn’t worked in their homes.

The Colored Girls Museum, 4613 Newhall St. in Germantown, helps to redress the frequent disregard of black women’s lives and labor. “Not just Shirley Chisholm and Beyonce deserve a place in museums,” said Vashti DuBois, 56, the museum’s founder and executive director, a Brooklyn native who lives in the 127-year-old Victorian twin that houses the museum.

“So much depends on cleaning women, child care workers and other colored women who remain anonymous. The museum shows colored girls from the ordinary to the extraordinary.”

The museum opened in September of 2015. Michael Clemmons and Ian Friday, who helped to establish it, serve as curator and associate directory, respectively. Each room honors a different aspect of colored girls, but they have in common the aim not only to inform but also to heal.

“Each room has its own healing sound and scent,” Dubois said. For instance, one room soothes visitors with the sound of water and the fragrance of frankincense and myrrh. Another room carries the earthy aroma of sage. The rooms also contain a vessel of water, said to absorb negativity in some African-based religions.

DuBois, a theater artist and literacy coach, came up with the idea of a museum of black women’s artifacts during her sophomore year at Wesleyan University. When she began to re-knit her life three years ago after her husband of 16 years, Al Stewart, died in a car crash, she asked her friends to donate objects. The first exhibit, “Open for Business,” was a 2015 Fringe Festival event. “People have been extremely generous with me,” she said.

DuBois amplifies the idea of healing by introducing the concept of urgent care. For example, one room is designated for triage, and another is the apothecary suite. The reception area emphasizes a bedrock of health — the need for enough sleep. Of the clay masks displayed on a wall, only two show women with their eyes open.

“The colored girl has been managing 400 years of sleep deprivation,” DuBois said. “Some of us don’t get enough sleep because we have several jobs or illness or concern about our children’s safety,” said DuBois, whose 18-year-old son was recently stopped by police for the first time.

Many exhibitions break stereotypes surrounding colored girls. Several black female nudes by internationally-renowned Germantown artist Barbara Bullock stirred controversy when she painted them in the 1970s and ‘80s. The bodies of these figures emphasize strength rather than the sexuality with which black women are often portrayed.

Hollywood has sometimes branded dolls made by people of African ancestry as Voodoun (also known as Voodoo) creations designed to carry curses. (Voodoun is a set of African-based spiritual folkways practiced chiefly in Haiti.) However, dolls here range from striking sculptures made from found objects to ceramic vessels by museum curator Michael Clemmons, whose dolls stand as memorials to the girls killed in the 16th Street Baptist Church bombing in 1963 in Birmingham, Alabama, by white supremacists.

Sometimes, both the artists’ lives and creations provide a unique view of colored girls. “Celestine Wilson Hughes, whose medium is stained glass, drives a SEPTA bus by day and does her art by night,” DuBois said. “Celestine has liberated stained glass from a religious context.”

The apothecary suite centers around Anna Louise James, (1886 to 1977). Born in Hartford, Connecticut, James, the daughter of an enslaved man who escaped from Virginia to New England, became the first black female to graduate from the Brooklyn College of Pharmacy in 1908. She went on to distinguish herself by running her own pharmacy in Old Saybrook as Connecticut’s first female pharmacist of African ancestry.

The museum’s only permanent exhibition consists of a room devoted to colored washerwomen, a familiar figure in black culture in North and South America. “Sometimes there’s shame that our mothers or grandmothers did this work, but washerwomen kept their families going when the men couldn’t find work,” curator Monna Morton said.

“They were pillars of our communities. Historically black colleges relied, in part, on small donations from washerwomen as seed money. Later, the women’s dimes and dollars helped to keep the schools going.”

The Colored Girls Museum, 4613 Newhall St., is open Sundays from noon to 4 p.m. The suggested donation is $10. More information at www.coloredgirlsmuseum.com. Constance Garcia-Barrio is a Mt. Airy freelance writer and former professor of Romance Languages at West Chester University.