Lincoln Drive is called ‘Dead Man’s Gulch’ for a reason

Horrific accidents have become commonplace on Lincoln Drive. Research by a Mt. Airy neighbors group found that within one year, Lincoln Drive had 118 accidents. Seen here was an accident that took …

Lincoln Drive is called ‘Dead Man’s Gulch’ for a reason 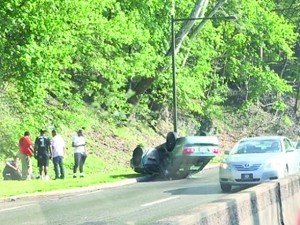 Having lived in northwest Philly for over 20 years, I avoid Lincoln Drive in heavy rain, sleet and snow. Especially at night when its narrow, snaky curves make it the city’s fifth highest spot for car accidents. Not just fender benders but horrific crashes from which victims may go straight to the morgue.

Now there’s the added distraction of driver texting on a road that requires the skills of Mario Andretti. However, on a sunny summer day, there’s no reason to avoid the Drive, or so I had thought. On Aug. 14, traffic was a little heavier than usual for a Sunday afternoon, which I credited to the Walnut Lane Bridge closure, forcing all traffic to Manayunk and the Western burbs to detour to the Drive. Just past the light at Wissahickon, in a stretch dubbed “Dead Man’s Gulch,” traffic came to a complete stop in both lanes and directions.

On the other side of the median, I saw two cars crushed like beer cans, one flipped over on its side. With no EMTs in sight, several drivers ahead of me had abandoned their cars in the road and crossed the median to rush to the aid of victims trapped inside their cars. A man stood in the middle of the road, a cell phone to his ear, no doubt calling 911.

Having living in Los Angeles and New York City, this wasn’t the first multiple-car pile-up I’ve seen. But it was the worst. As my car inched forward, I eventually saw several ambulances and police cars, sirens blaring, about a half-mile from the accident site. They were stuck in traffic, unable to move.

If drivers wanted to make way for the EMTs, their only option was to drive into the heavily wooded hills or into Wissahickon Creek. At that moment, I realized that what makes the difference between life and death on Lincoln Drive isn’t its curves but its total lack of emergency access roads and shoulders allowing cars to pull over.

It wasn’t until the next morning that I read that two people had died in what had been a three-car collision. A speeding car had jumped the median, hit a car driving in the opposite direction, then went airborne back over the median to strike a third vehicle. The 23-year-old driver in the speeding car was pronounced dead at the scene. The other victim was a 55-year-old woman in the third vehicle who died after being taken to Einstein Medical Center. That could’ve been me. You. Or any other law-abiding driver.

I have to wonder. How did a delay of 10 to 20 minutes or more impact her survival? And how many people have to lose their lives or sustain permanent brain damage or paralysis before the city widens the road to allow for prompt emergency access?

This is not a new source of concern to those of us who use Lincoln Drive frequently. Back in 2007, concerned Mt. Airy neighbors formed the Northwest Traffic Calming Committee (NTCC) to lower the incidence of accidents on Lincoln Drive. Their research found that within one year, Lincoln Drive had 118 accidents.

Why? The 25 mph speed limit is not enforced. Most cars take the hair-pin curves at 45 mph or higher. Rather than handing out tickets to every commuter, a patrol car occasionally travels on the Drive to slow traffic temporarily. As soon as the black and white vanishes, the Drive quickly reverts to the Indy 500.

According to the Philadelphia Streets Department, Lincoln Drive is scheduled for a “major facelift” starting next spring to be completed one year later. While this includes improving paving, sidewalks, building better median barriers and guardrails, improving traffic signals and installation of better drainage, there are no provisions for creating emergency access roads or shoulders. Hopefully, this will lower the incidence of cars jumping the median, but it will not reduce speeding or fatal accidents on Lincoln Drive. Nor will it allow Police and EMTs to reach victims in a timely manner.

Philadelphia Streets Commissioner Mike Carroll said, “There is no funding for such improvements at this time.” When improvements on Lincoln Drive start next Spring, commuters will have to use alternate routes such as School House Lane, which runs somewhat parallel to Lincoln Drive and provides a safe, convenient route. My plan? I’m going to start using alternate routes right now. Because getting to my destination fast isn’t as important as getting there alive.

Ed. Note: I also tried to get on Lincoln Drive just before 3 p.m. on Aug. 14, knowing nothing about the accident, but the Drive was closed off, as is the Walnut Lane Bridge, and traffic was at a complete standstill. Serious accidents on Lincoln Drive are not uncommon. The most publicized one took place on March 18, 1982, on Lincoln Drive near Rittenhouse Street. Famed singer-songwriter Teddy Pendergrass, who lived on Allens Lane in West Mt. Airy, lost control of his Rolls-Royce Silver Spirit. The car hit a guard rail, crossed into the opposite traffic lane and hit two trees. Pendergrass and his passenger, Tenika Watson, a nightclub performer, were trapped in the wreckage for 45 minutes. While Watson walked away from the accident with minor injuries, Pendergrass suffered a spinal cord injury, leaving him a paraplegic, paralyzed from the chest down. Pendergrass died Jan. 13, 2010, at the age of 59.