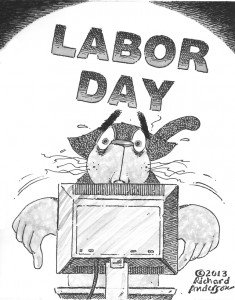 Labor Day arrives next Monday, Sept. 2, marking the end of summer and the last day it's acceptable in high-society circles to wear white. It's also a day most of us have off. It's time to stock the cooler with cold beverages and fire up the grill.

Like a lot of our holidays, the origin of Labor Day is obscure. The story is more than a century old and is of a time when our country seemed much different than it is today.

The holiday was hastily enacted by Congress following the Pullman Strike of 1894. That strike was organized by the American Railroad Union, led by Eugene Debs, a former Democratic state senator in Illinois who became a leading American socialist and a candidate for President.

The strike originated in Chicago when the Pullman company that manufactured train cars cut wages but failed to reduce the rents of its workers, many of whom lived in housing developments controlled by the company.

The resulting Pullman Strike shut down rail service around the country and was broken up when President Grover Cleveland directed U.S. troops and federal marshals to intervene. In the violence that followed, 30 strikers were killed and 57 wounded in cities around the country. Property damage was estimated to exceed $80 million, a vast sum in 1894.

Though public opinion at the time largely favored government intervention, Congress proposed and ratified the national holiday of Labor Day six days after the strike failed. The holiday was established to recognize the contributions of the American worker and to do so with a national day off and parades.

The working conditions of our labor force today are far removed from those of 119 years ago. But many of the issues that faced labor then persist now. Wages are under pressure to stay low to ensure healthy profit margins. And despite flagging pay rates for middle-class Americans, regardless of whether their collars are white or blue, the cost of living continues to rise at a faster pace.

For an increasing number of Americans, competition in the labor market is no longer an advantage for the worker. There is a surplus of qualified workers in so many fields today. In industrial and manufacturing jobs – where the labor movement was born more than a century ago – this is especially true. With that surplus, a lower demand means lower wages.

Unlike the era of the Pullman Strike, the availability of education for all makes it easier for some to find work and to change jobs if necessary. It's also much easier today to get around and to take jobs in towns that are an hour's drive away – something inconceivable in the days before the Interstate highway.

On balance, things are better now for American workers, but it's always good to remember those times when it wasn't so good or easy, and to remember the efforts of those who made it better.