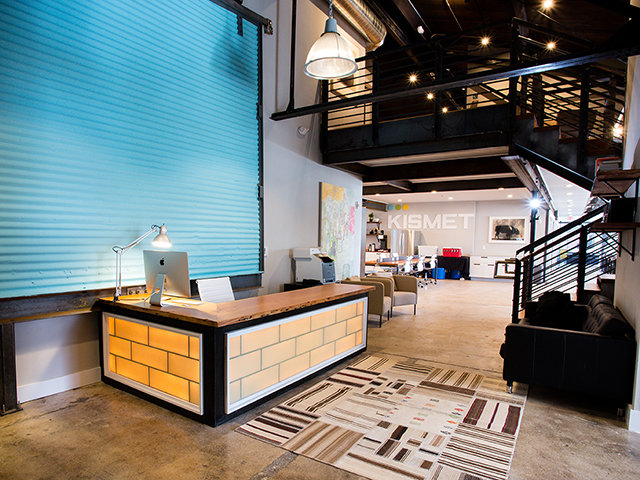 There aren’t many spaces like Kismet Co-Work in Chestnut Hill.

Spacious and contemporary, it feels like the sort of office space you’d encounter in Center City – perhaps in a well refurbished warehouse in Old City or even Northern Liberties.

But Kismet, the brainchild of local Realtor Chris Plant, represents a very contemporary co-working space at 12 W. Willow Grove Ave. in the former space of the Chestnut Hill Pack and Post.

Plant, whose day job as a Realtor with Elfant Wissahickon who specializes in commercial real estate (with Elfant’s EWR Commercial wing), came up with the concept for Kismet in December of 2015. Co-working certainly wasn’t a new idea, with similar spaces cropping up around center city like Benjamin’s Desk, Pipeline Philadelphia and Industrious Philadelphia to name a few. But it’s a relatively novel concept in outer neighborhoods and auxiliary suburbs.

Chestnut Hill felt like a neighborhood that needed a co-work space.

“I knew something like that would work here,” Plant said. “Because of my commercial work at Elfant Wissahickon, people are always coming up to me and saying, ‘I don't want an office-office; I want a small room, a shared receptionist.’ They will describe co-working without knowing it.” 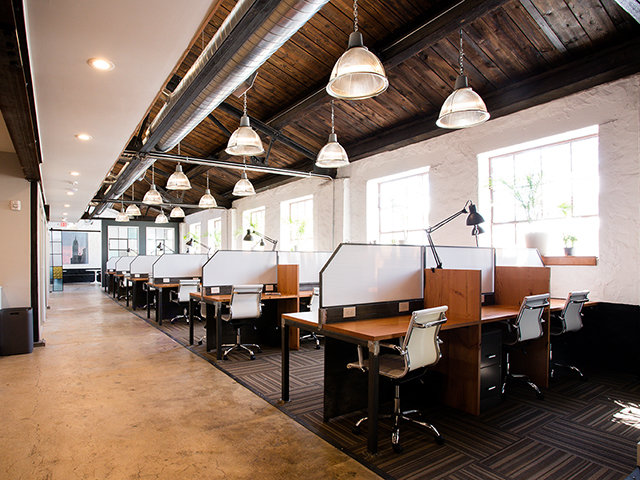 A bank of open desks at Kismet Co-Work the day before it opened. (Photo by Brian James)

Plant was familiar with the old Pack and Post building. He was the Realtor that helped bring Good Food Market to the space and, when it closed, he brought Balance Fitness to the space. In addition, he helped bring Artist and Craftsman Supply to the portion of the building that had been occupied by a rehab center. He knew there was still significant space in the old garage property. He showed his plan to property owner Andrew Eisenstein who liked it.

After securing the zoning, Plant brought on Executive Director Richard Creamer, and got to work. James Morrissey, the architect behind the update of Chestnut Hill Hotel and the Market on the Fareway was hired to design the space. Kismet opened for business on March 17

One week after opening, Kismet already had 15 members. Members have three main tiers they can pay for. A fee of $350 a month gets them any open desk in the space, $450 a month rents a dedicated desk, where files, computer gear, etc. can be kept, and $1,000 a month can rent an enclosed office.

The benefit, in addition to the ability for someone who is self-employed to leave the house, is that the small office space includes a front desk with reception, a shared café space and multiple meeting and conference rooms that can be rented if needed. Tenants can conduct meetings, rent extra space for temporary employees and even mail stuff right from the front desk.

John Medrano, of North Wales, who runs a one-man financial services company called TrueUp Business Solutions, is one of Kismet’s first tenants. With his kids attending Germantown Friends School, Kismet was a perfect location and the perfect solution for his business. He signed up right away for a fixed desk.

“It's great,” he told the Local. “I can work from home. But it's nice to have a place to go to work. It's something people who work at home struggle with – when to turn it on and turn it off. It's great to have this space. It made a lot of sense. I was looking at places downtown, but it's nice to not have to drive an hour.”

The other advantage Kismet has over the home office, Medrano said, is the opportunity inherent in working in an open office with numerous other local entrepreneurs.

“In a space like this, I'm surrounded by other businesses that might need my help and I need their help,” he said.

It’s the sort of connection Plant expects will happen regularly. It’s a connection he’s dubbed “Kismetic,” extracted from the meaning of the Turkish word after which the co-working space was named: “happy accident.”

“It’s a word that’s stuck with me since high school,’ Plant said. “I think things happen for a reason. It’s like when you miss a train to get downtown, but you run into an old friend and get the chance to reconnect.”

And, it’s the sort of creative and collaborative experience Plant is counting on for Kismet.

“A lot of people who have home offices and could very easily work from home are desperate for a community of people to work in,” he said. “That's the Kismet idea in a whole. Create a space where people feel not only energized by the work they do here but by the people they meet here while they're doing it.”

Plant said his expectation is that Kismet will expand its offerings to include programming. From lunch and learn events where his tenants can mingle and learn about a subject, to speaker series and lunch-truck gatherings in the front courtyard space that attract the greater Chestnut Hill community. Plant thinks Kismet can be a dynamic center for Chestnut Hill.

“I want the space to be known not just for entrepreneurial work but as a real creative space,” Plant said. “This is going to be one of the most creative spaces, not just in Chestnut Hill but Philadelphia.”