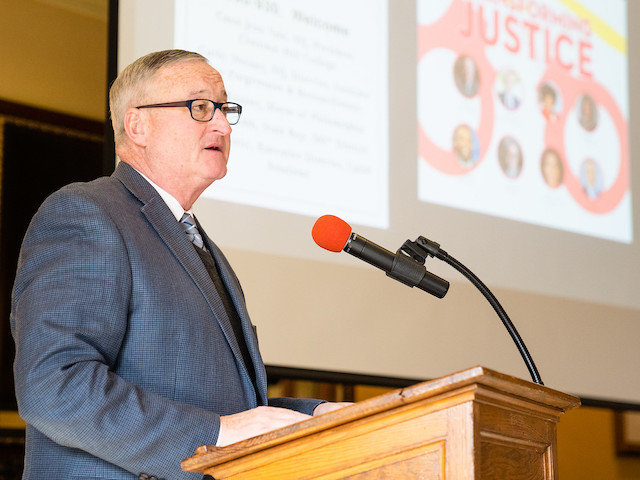 Kenney, who is coming off of a landslide second-term victory, expressed his feelings that “great progress” has been made in justice reform in recent years, despite the massive amount of work that still needs to be done. He cited measures that his administration has implemented to ensure a more equitable level of criminal justice across the board, including last year’s announcement that the House of Correction would be closed by 2020.

“I remember when I was running for office back in 2015, I was on a radio show on WERD,” Kenney recalled. “I guess because of where I come from, what I look like and who I am – Irish Catholic, South Philly guy, former Mummer from Rizzo Land – the interviewer assumed and asserted that I was going to buy land along the waterfront and build a prison. And I told him I was going to do the opposite, that we were going to close a prison. He, of course, was a little skeptical, but we've done just that.”

Kenney reaffirmed his dedication to further criminal justice reform, calling it a “primary focus” for his second term. Though he acknowledged various frustrations and holdups in the efforts toward making progress, he related a story from the weekend before the election as one of many examples that continues to give him hope.

He had met two young men in West Philly, one of whom was wearing an ankle bracelet, and asked them what they wanted to do next in life. Though they weren’t exactly sure, Kenney gave them his cell phone number and offered to help set them up for job training. Though they missed a scheduled appointment after the election, he followed up with them and discovered they had been skeptical of the offer, thinking it was only a tactic to gain their votes. When he assured them it was legitimate, they rescheduled with the intention of following through.

“Hopefully we'll begin their journey away from the negative and toward the positive,” Kenney said. “I honestly believe that every single person you touch touches hundreds of other people. Everyone in life you turn in the right direction helps their family, their parents, their children and everybody else they come in contact with for the rest of their lives.”

Rabb was also on hand to speak at the start of the conference, following up Kenney’s remarks. On the state level, Rabb has likewise been dedicated to justice reform, and his work has included introducing a bill to reduce third-degree misdemeanor sentences from one year to 364 days. Though this seems like an insignificant change on the surface, doing so prevents the misdemeanor from being classified as a felony, which could also cause non-citizens to be deported.

Rabb recalled some crucial Pennsylvania history from 200 years ago that he said still has consequences today. He discussed a Pennsylvania law from 1820 that required “any colored person” brought into the state to be the responsibility of the person who brought them. It was an effort by the state legislature, Rabb said, to reduce pauperism, or the number of poor people. The state’s decision making was clearly predicated on the determination that African Americans were likely to be poor and that the state was not interested in caring for them.

“The connection between criminal justice, poverty and race has been the norm for centuries in our own state,” Rabb explained. “We have to ask ourselves, ‘To what end?’ You all have chosen to be here. You've chosen to be part of the solution. It's incumbent upon all of us to come together and say, ‘This cannot stand. This is a moral imperative.’”

Brendan Sample can be reached at brendan@chestnuthilllocal.com or 215-248-8819.

SCH Gets Creative during COVID to Keep Connections Strong