Is it time for a tower in Philadelphia?

The proposed Centennial Tower by Joel Levinson The Centennial Tower, 1,000 feet high, was proposed to commemorate the 100th birthday of the United States. The Tower was to be erected in Fairmount …

Is it time for a tower in Philadelphia? 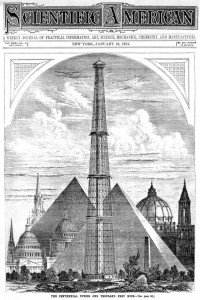 The Centennial Tower, 1,000 feet high, was proposed to commemorate the 100th birthday of the United States.

The Tower was to be erected in Fairmount Park in 1876 on the grounds of the Centennial Exposition, replete with never-before-built monorails. Centennial Tower was promoted as the tallest structure ever built by man, although a tower of that same height had already been proposed in London in 1832.

The structure was illustrated in an engraving that appeared on the front page of an 1874 issue of the Scientific American. The imposing height of the tower is compared to the Great Pyramids, the 501-foot high spire of the cathedral in Cologne, and the U.S. Capitol. Clarke, Reeves & Company designed the Tower and it was to be built by the Phoenixville Bridge Works, the firm that constructed the magnificent 1875 wrought-iron Girard Avenue Bridge (replaced around 1970) that provided much-needed, cross-river access to the fairgrounds.

Memorial Hall, a Beaux-Arts styled building still standing in the Park (now home to the Please Touch Museum) is a living reminder of the fabulous exposition that attracted almost 10 million people to Philadelphia. That number represented over one-fifth of the people then living in the U.S.

No one ever climbed the spiral staircase or took the four elevators that were housed in a 90-foot diameter tube that rose square in the center of the tower’s lacey composition of diagonal tie bars and horizontal struts. Views of the city and out to the countryside from the four viewing platforms would have been stunning. But the tower, whose cost was estimated at $1,000,000, was never built, falling victim to a number of obstacles, not least of which was the financial panic of 1873 that was still reverberating through the minds of many in 1874 when the tower was conceived.

Gustave Eiffel and his winning entry in a competition to design and build a tower in Paris on the Champ-de-Mars fared much better. Even though Eiffel’s Tower was the focus of protests by French artists and writers who saw the Tower as a triumph of French engineering over the loftier artistic ambitions and accomplishments of their fair city, Eiffel persisted and overcame many technical, financial, and labor-related obstacles along the way. But in the end, the universal symbol of Paris was built. Amazingly, it paid for itself in ticket sales – and paid for itself before the Exposition Universelle of 1889 closed its doors. The Eiffel Tower continues to remain profitable and is one of the iconic cultural symbols of the modern world.

Few people know that another plan was hatched to build an Eiffel Tower-like structure in London in 1890, partly as a result of the phenomenal success of the Paris precedent. A competition was organized and 60 entries were submitted. Two came from the United States. The 60 schemes ranged from the elegant to the absurd and not surprisingly, most were Eiffel look-alikes. All the design ideas were illustrated in a leather bound book, but to no avail. Perhaps the London endeavor came too close on the heels of the Eiffel success, or perhaps no proposal sufficiently captured the imagination and the anticipation of profits for those asked to fund the project.

It is now a century and half since Eiffel’s engineering ingenuity and graceful design first dazzled the world. Since then, engineering know-how has advanced dramatically and a new, less traditional aesthetic has been changing the face of the built environment. It would therefore be interesting if Philadelphia hosted an international design competition to design a tower for our city, perhaps one that honors the creative genius of Benjamin Franklin, founder of many unprecedented institutions.

If a Benjamin Franklin Tower Competition did little more than focus attention internationally on Philadelphia, that alone would be worth the investment in conducting the contest and exhibiting the submissions, perhaps in our Frank Gehry-expanded Philadelphia Museum of Art. One possible site for the tower, dramatically visible from many locations in the city would be on a platform over the train tracks at 30th Street Station, the site of a proposed complex developed during the U.S. Bicentennial in 1976, and now again the focus of interest for development. The tower could be located on axis with and visible from the Benjamin Franklin Bridge and the Vine Street Expressway. If Franklin Tower were built at 30th Street, it would have a greater chance of profitable success if it were built as the centerpiece of a permanent tourist complex also built over the tracks. If one of the tower contest entries was aesthetically compelling and a modern engineering wonder, funds could be sought from investors and foundations to build the tower. After compensating the investors, profits from ticket sales could go to support the Philadelphia school system on an on- going basis; i.e. providing a source of much-needed revenue, long into the future.

Several decades ago, I had the pleasure of trying to promote an innovative museum idea based on recording American history in 25 year increments starting with the present. The project was called the Avenue of American History. Working with various consultants, the project attracted local and national interest. Under my direction, a spin-off of the concept was proposed for the British Millennium celebration in 2000. The proposal, called Avenue of British History, is actually received Phase One approval. An Avenue of American History at 30th Street is one of several concepts worth exploring if the Benjamin Franklin Tower Competition attracts the necessary support.

Philadelphians should once again think and act like Franklin – with vision, passion, and invention.