Brandon Bruce (left) and his younger brother Terrell, now deceased, are seen during happier times. A fundraiser for the Terrell L. Bruce Memorial Fund will be held April 19 at Iron Hill Brewery in … 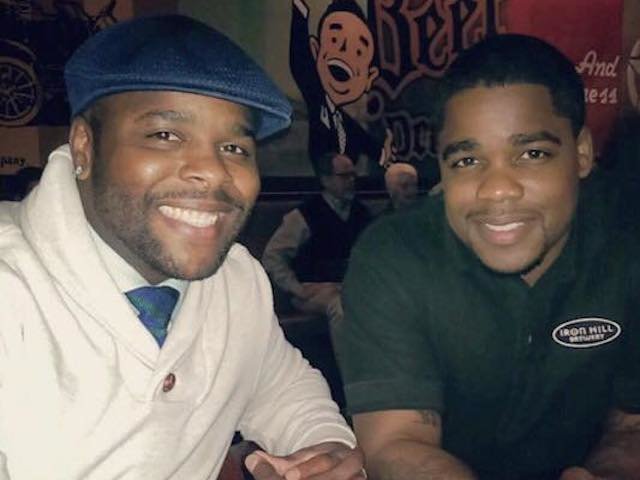 Brandon Bruce (left) and his younger brother Terrell, now deceased, are seen during happier times. A fundraiser for the Terrell L. Bruce Memorial Fund will be held April 19 at Iron Hill Brewery in Chestnut Hill, where Terrell had worked. More information at www.terrelllbrucememorialfund.org/.

Iron Hill Brewery & Restaurant will host a special event on Thursday, April 19, from 5 to 10 p.m., in honor of their beloved server Terrell Bruce, a tragic victim of senseless gun violence at the age of 33, to help raise funds for the Terrell L. Bruce Memorial Fund.

On Dec. 27, 2016, Terrell’s former girlfriend, Martina Wescott, then 27, a 2011 University of Pennsylvania graduate, turned herself in to police and was charged with shooting Terrell in the head while in a moving Ford Expedition, which then crashed on the 500 block of Walnut Lane in Germantown. The shooting caused an accident with another vehicle around 12:30 p.m., and the Expedition overturned, police said. Wescott turned down an offer of 30-to-60 years in prison. Her murder trial is expected to be held this summer.

Brandon S. Bruce, the fraternal twin brother of Terrell L. Bruce, of Mt. Airy, created the Terrell L. Bruce Memorial Fund last year to continue his brother’s legacy of community service and academic excellence. Ironically, Terrell, who graduated from La Salle University in 2008 with a B.S. degree, was founder and president of the Nathaniel M. Kirkland Foundation, which he started in memory of his younger brother Nathaniel Kirkland, who had drowned in Guatemala during a service mission for Dickinson College.

Last year, in conjunction with the Philadelphia Education Fund, Bruce, who works with the U.S. Food and Drug Administration, awarded four scholarships through the Nathaniel M. Kirkland Scholarship and two from the Terrell L. Bruce Memorial Fund Scholarship. When Kirkland died in 2009, Terrell started a foundation in his name.

Brandon said it made sense to honor Terrell by giving out scholarships to support today’s youth because he was always sponsoring or supporting other people. Mt. Airy resident Kim Williams, director of Mt. Airy Performing Arts, where Terrell sponsored a dance scholarship for young girls, fondly recalled Terrell. “He was always positive and looking for the good in people … never negative,” she said. “He was a kind, funny gentleman who had a passion for learning and working to help people make changes in their own lives.”

Mt. Airy resident Brian McGinly, a close friend of Bruce’s, said, “Terrell lived life with no excuses. And he held everyone else around him to that standard. He was so charismatic and real about life that people would come to him for advice on problems and how to be successful. But they would often leave hearing something they didn't want to hear; rather what they needed to hear. Terrell pushed himself and anyone else towards maximizing success in their lives. Even people he didn't know. He never preached at people but didn't pull punches.”

Warren Sewell, general manager for Iron Hill Brewery & Restaurant, first met Terrell when training him to become a server eight or nine years ago. He said they quickly became good friends. “Terrell wanted the best for everyone,” he said. “If he could teach you a skill or help you with something, he did. He had an innate ability to connect with people.”

In honor of Bruce’s “consistently stellar commitment to Iron Hill,” Sewell said they will be releasing LeBruce Saison, a beer brewed with apricot crafted by Bruce and the brewery. He described the saison as having a bold, juicy fruit flavor with earthy spice notes.

Iron Hill will donate $1 per pint purchased directly to the Terrell L. Bruce Memorial Fund at each of the four locations where Bruce worked, including Chestnut Hill, Ardmore, North Wales and Maple Shade, NJ, on April 19 to help raise money for the scholarship fund. Iron Hill will also host a “Give 20” night to donate 20 percent of food sales from each table that presents a partner coupon from the Terrell L. Bruce Memorial Fund. So head to Iron Hill to honor a generous man whose motto was: “Be the change you want the world to be.”

For more information about the fund, visit https://www.terrelllbrucememorialfund.org.