'Inside Out' brings great art to area neighborhoods

Artists Peter Paone and Eileen Goodman look at Paone's piece of artwork “Flowering Surprise” outside of The Philadelphia Print Shop, 8441 Germantown Avenue. Next to Paone's artwork is Vincent van …

'Inside Out' brings great art to area neighborhoods 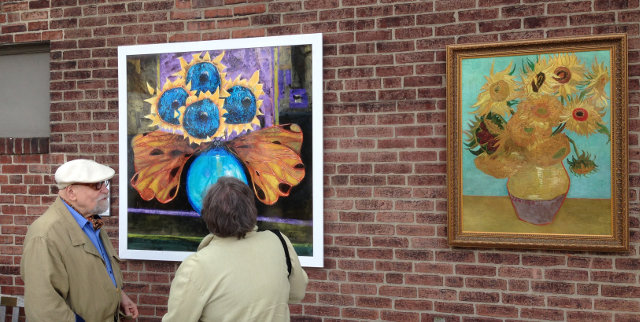 Artists Peter Paone and Eileen Goodman look at Paone's piece of artwork “Flowering Surprise” outside of The Philadelphia Print Shop, 8441 Germantown Avenue. Next to Paone's artwork is Vincent van Gogh's “Sunflowers,” which inspired Paone at a young age to pursue a lifetime of painting. (Photo by Kevin Dicciani)[/caption]

If you don't have time to make a trip to an art exhibit anytime soon, that's OK – 21 replica pieces of classic and modern art are on display throughout Mt. Airy and Chestnut Hill, where the neighborhoods themselves have become a museum, and the paintings are free for all to gaze at in awe.

The outdoor artwork is part of the Philadelphia Museum of Art's national arts initiative, Inside Out. Funded by the John S. and James L. Knight Foundation, the project aims to bring high-quality replicas of masterpieces to communities around the region, with Mt. Airy and Chestnut Hill being two of the first ten communities chosen. To make this possible, the museum collaborated with Mt. Airy USA and the Chestnut Hill Business District.

The chances for spontaneity were further increased when the Philadelphia Museum of Art partnered with Woodmere Art Museum. Woodmere supplied replicas from its collection to be paired with five masterpieces, the tandem of paintings often sharing a common theme and working off one another to juxtapose the past with the present.

“It's incredibly exciting and wonderfully surprising to be walking through Chestnut Hill or Mt. Airy or just driving through and, suddenly, works of art pop off the walls and catch your attention,” said William R. Valerio, director of Woodmere Art Museum. “For us, the ability to create a dialogue and to make that dialogue very public between works of art in Woodmere's collection and works of art in the Philadelphia Museum of Art is an extraordinary opportunity, and we're thrilled to be a part of it.”

The first pieces of artwork were installed on May 12 outside of the Philadelphia Print Shop on Highland Avenue in Chestnut Hill. The pieces featured were “Sunflowers” by Vincent Van Gogh and “Flowering Surprise” by Philadelphia artist Peter Paone. All of the artwork will be on display in the neighborhoods until August.

The artwork, with frames provided by H&G Sign Co., can be found elsewhere through the area. There are paintings outside of the Chestnut Hill East SEPTA Station, the Chestnut Hill Library, Buckley Park, Lovett Library, as well as many other locations.

Inside Out officially opened on May 20 with a small ceremony outside of the Philadelphia Print Shop. In attendance were representatives from Mt. Airy USA, the BID, Inside Out, and the office of State Senator Art Haywood. After the ceremony, a trolley took attendees from Chestnut Hill to Mt. Airy for a tour of the artwork on display in both neighborhoods.

Friedland spoke at the ceremony about the original discussion the museum had over which locations to host for the project. Immediately, she immediately thought of Mt. Airy and Chestnut Hill.

“Mt. Airy and Chestnut Hill were at the top of our list,” Friedland said. “I knew these were the kind of communities that would really embrace and celebrate the project.”

Upon hearing of the news and the partnerships being formed between all of the various institutions, Martha Sharkey, executive director of the Chestnut Hill Business District, said she was “thrilled to have all of these wonderful pieces of artwork on display through both of our communities for people to enjoy throughout the summer.”

At the ceremony, Paone, the recipient of numerous grants and awards, such as the 172nd Annual Painting Prize from the National Academy of Design as well as a Guggenheim Foundation Fellowship, mentioned how Inside Out fit perfectly in Chestnut Hill. He said the community was “very art-minded,” exemplified by the fact that it has its own museum, the only one in Philadelphia dedicated only to Philadelphia artists and devoted to telling the storied history of Philadelphia art.

In speaking about the significance of the project as a whole, Paone said: “For people to go to the Philadelphia Museum of Art or Woodmere, they have to plan it. But to come across it on the street, not only do they enjoy it, but it's an incentive to go to the museums. It's like everything else – once they start finding out all the treasures that these two institutions have, they keep going back.”

The Philadelphia Museum of Art hopes the project will draw residents of Mt. Airy and Chestnut Hill to the museums, too. From July 17-19, Gina Ciralli, project coordinator for Inside Out, said residents of Mt. Airy and Chestnut Hill will be granted free admittance to the museum. So, if you don't get a chance to see the wonderful replicas of the paintings, there is a window of opportunity to see the real thing.

On the side of a building, at a bus stop, or in a museum, for Paone, the function of art, and one's relationship with it, never changes.

“Art is public, it doesn't belong to anybody,” Paone said. “It belongs to everybody. And the works should come to you as much as you should go to them.”