How will One West impact Chestnut Hill?

by Diane M. Fiske Chestnut Hill is a quaint, historical community known mostly for its stately homes and quaint retail buildings, many which date back to the Victorian era. But one structure that …

How will One West impact Chestnut Hill? 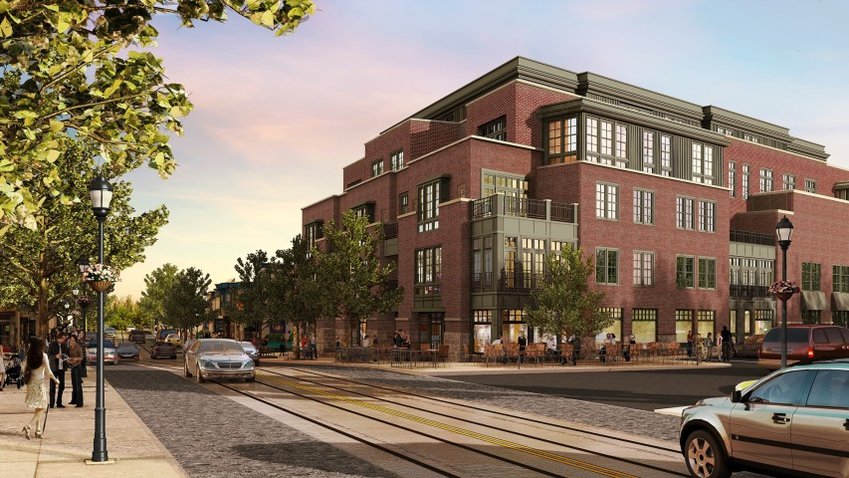 Chestnut Hill is a quaint, historical community known mostly for its stately homes and quaint retail buildings, many which date back to the Victorian era.

But one structure that could change that reputation is the five-story, contemporary building called One West, at 8200 Germantown Ave., which is nearly complete. Its retail anchor, The Fresh Market, an upscale grocery store, will open this week.

That building is the work of Bowman Properties and its principal managing partner, Richard Snowden,  a controversial developer who, with his family, owns approximately 70 buildings, mostly residences, in Chestnut Hill.

The building will be completed this spring after four years of planning, a year-long negotiation with neighborhood opposition at the onset and multiple appearances before local and Philadelphia zoning panels to tweak the zoning for the site, which is split between commercial and residential.

The One West building is located on the two-acre property of the former Magarity Ford dealership and auto repair facility, which closed about eight years ago. During the first year of planning, Bowman negotiated with the Chestnut Hill Community Association over the design for the property. Snowden’s final plan slightly increased the commercial area for the store parking but also reduced the density by reducing the original plan from six stories to five.

Snowden, in a telephone interview expressed surprise at the resistance of many neighbors who expressed opposition to his project in the beginning and was unaware of anyone opposed to the project in the present.

He said when asked about residents’ complaints that this may be the forerunner of large stores in quaint Chestnut Hill, Snowden said the Magarity site was unique in that it was a large, commercial space that was the site of car dealership – not a block of Victorian buildings

“There is no other large site like that in Chestnut Hill.”

When asked if he thought One West would negatively impact the 19th-Century atmosphere of Germantown Avenue, Snowden said he and his architect Stan Runyan didn't want to build a “fake colonial building,” but the plan did use traditional Chestnut Hill materials: brick, Wissahickon Schist and blue stone on the exterior of the building. The condominium windows include small glass panels along with a white frame.

And, he added, if he hadn’t developed the property someone else would have, and it might have been a more suburban-style shopping center.

“We didn’t think many residents realized that a Giant Food Store and a CVS were interested in the site before we decided to use it,” he said.

He said he wanted condominiums rather than rental apartments in the property because he didn’t want to get into managing rentals for so large a project.

“Change is coming, and Chestnut Hill is no longer a sleepy little village," Snowden said. “The best we can do is negotiate to make it the best we can.”

Architect Larry McEwen, who is vice president of the Chestnut Hill Community Association's Physical Division, which oversees multiple planning and zoning committees of the association, is one of the design professionals who labored over Snowden’s proposal for about four years.

He said the height of the building “forms a bookend” with the Chestnut Hill Hotel across the Street. The two exceed the two- or three-story height of most buildings on Germantown Avenue.

“Even though the One West building is taller than the hotel because is lower on the hill than the hotel, it seems to be a comparable height,” McEwen said

He said because there were two zones, commercial and residential, included in the site, there wasn’t really a case of spot zoning. He said to be successful, an area such as Germantown Avenue should offer a variety of zones, both residential and business.

There is a problem, McEwen said. Residents of West Hartwell Lane right across the street from the building’s south-facing facade, still have to contend with a tall wall along their street.

Architect Joyce Lenhardt, who sits on the Chestnut Hill Land Use Planning and Zoning Committee, said that residents might want to remember that Hartwell Lane was the former home of Magarity Ford’s mechanic and body shop where residents complained that work on the cars was noisy and never stopping.

None of the residents who opposed the building’s plans when it was first proposed agreed to speak to the Local about the development today.

Terry Halbert, who gathered more than 1,000 signatures in protest to the development and was quoted in 2012 that all she wanted was a say in the development, did not return multiple requests for an interview.

Neither did her fellow petitioners. All declined to speak on the record. Another leader of the protest answered this reporter’s call and then quickly hung up when she realized the nature of the call.

When asked about residents who are afraid to talk on the record, Snowden  said he had no idea why anyone should be afraid of him.

Snowden, however, is optimistic that all the dissention will blow over and people will conclude that he has served the community well.

“In a few years people will forget all this it and enjoy the shopping and the new businesses in the building,” he said.