Henry H. Houston Elementary School, 7300 Rural Lane in Mt. Airy, celebrated the official opening of its KinderGarden on Oct. 24. Funds for the new play space, garden and mural were provided by a … 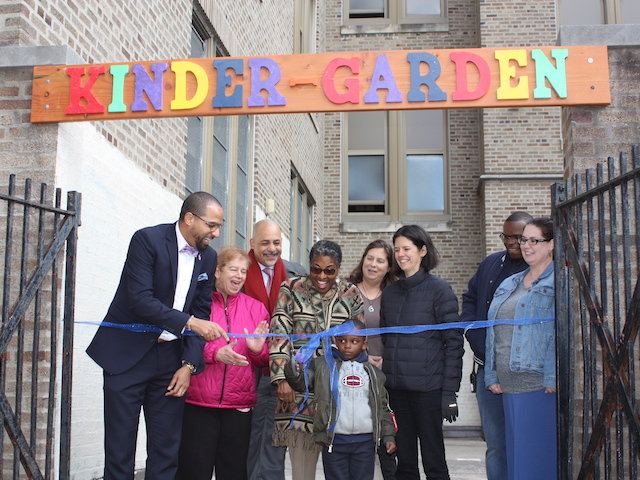 Five-year-old Zion Young, a kindergartner at Henry H. Houston Elementary School, 7300 Rural Lane in Mt. Airy, anxiously held the scissors at the ribbon-cutting ceremony for the school's new KinderGarden, a play space designed and created in part by kindergartners that includes a garden mural, three raised garden beds containing various plants, benches, basketball hoops and a variety of games painted on the playground.

Thanks to a grant from Green in Chestnut Hill (GRinCH) and several volunteers including students, parents, members of Families of Houston and community members, Houston's kindergartners now have a play space of their own.

State Rep. Chris Rabb, Camara Jordan, a representative from Councilwoman Cindy Bass’ Office, Gary King, of Mt. Airy U.S.A., GRinCH president Jen Reed, Elayne Blender, community advocate and a dedicated volunteer at the school, and Steve Stroiman, of the Mt. Airy-Nippon-Bryan-Cresheim Town Watch were just some of the many community representatives and officials at the ribbon-cutting ceremony on Oct. 24.

He recalled a meeting at Steve Stroiman’s house during his first year as principal, where community members and parents asked him how he intended to encourage neighborhood families to send their kids to Houston.

His reply was “If we build it, they will come.”

He added that while the school does have “phenomenal early literacy skills that everyone rants and raves about, but it’s also about the aesthetics.”

“Research says that students who learn in positive environments receive one and a half more instruction than their peers,” he said. “Students want to go to a school that is warm and inviting.”

He also acknowledged and thanked Claire Murphy, a parent and member of Families of Houston, who created the mural with input from kindergartners.

Jessica Freda, one of the kindergarten teachers at Houston, said the Families of Houston and the kindergarten staff wanted to create an outdoor learning space for students where they could engage in some structured playtime.

“We sat down and talked about the mural and games on the floor,” she said. “We wanted it to be a very special and welcoming place for them to be.”

Mary Chalmeis, whose grandson Zion Young is in Freda’s class, said the new space will help keep the children safe.

“I think the playground is beautiful,” she said. “They have their own little area here. They can play away from the bigger kids – the first and second graders. I donated a lot of miniature basketballs and a couple of jump ropes. Zion is ready to go outside and play now.”

Rabb said, “the more we invest in early childhood public education” the less we will spend “putting humans in cages.”

“Part of my job is making sure we get every single dollar we deserve regardless of the ZIP code we live in,” he said. “And the other piece of news I want to share is you didn’t get a single dime from me, but you didn’t ask. Part of my job is to liberate funds from Harrisburg and bring it down to the district, and I want to make sure it reaches the right hands and the right communities. So, if I don’t hear from you, I am going to be very disappointed.”

Jordan added, “On behalf of Councilwoman Cindy Bass, it’s always an honor to see the holistic approach being taken to the improvement and the strengthening of our schools.”

Amy Edelman, a member of GRinCH’s board, said in an email that the organization was “thrilled” to give a grant to the school for its KinderGarden project.

“We were so impressed with their application, enthusiasm and goal of learning and watching plants grow,” she said.

She added that the school’s application included quotes from children in kindergarten including Dechaune, who said having a KinderGarden would allow him to experience the joy of working with nature.

“It would be fun because I can take care of things,” he said.