Abolition Hall was built by Quaker activist George Corson in 1856. It was a rallying point for many speeches and meetings aimed at abolishing the institution of Slavery in the United States. (Photo … 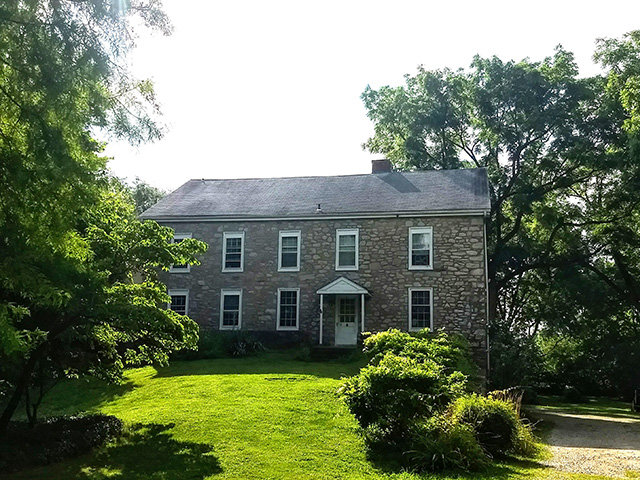 Abolition Hall was built by Quaker activist George Corson in 1856. It was a rallying point for many speeches and meetings aimed at abolishing the institution of Slavery in the United States. (Photo by Pete Mazzaccaro)

A zoning conflict between a developer and Whitemarsh Township residents eager to preserve Pennsylvania’s most renown Underground Railroad stop is provoking debate over how a community’s desire to retain its heritage should weigh against the rights of private property owners.

K. Hovnanian Homes wants to build The Villages at Whitemarsh, a 67-townhouse development, on a parcel of land that includes the Abolition Hall, Hovenden House and Maulsby Barn. All three properties are on the National Register of Historic Places for their roles as safe havens for slaves fleeing more Southern points.

While the home builder plans to sell the historic structures, critics complain the development will leave behind too little open space that is important to the site's historical context. 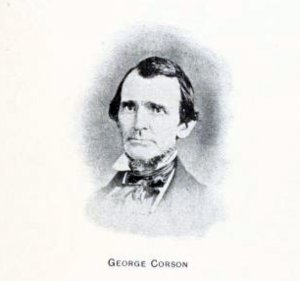 The structures and 10 surrounding acres are owned by descendants of George Corson, a renown Quaker abolitionist who believed he was directed by God to offer safe passage to slaves. He founded the Montgomery County Anti-Slavery Society in 1837, and the properties at the intersection of Germantown and Butler Pikes were an important stop for blacks on the road to freedom in the mid-1800s. Anti-slavery orators such as Frederick Douglass, Lucretia Mott and Harriet Beecher Stowe roused crowds as large as 200 inside Abolition Hall.

Abolitionist William Still hailed Corson in his famous 1872 book, "The Underground Railroad," writing that a "slave, fleeing from his master, ever found a home with him, and felt while there that no slave-hunter would get him away until every means of protection should fail."

He subscribed to a Baltimore paper titled "Genius of Emancipation," "and thus kept abreast of the anti-slavery movement," according to a Corson family history penned by Dr. Hiram Corson.

A generation later, the property was home to Corson’s daughter Helen and her husband, Irish artist Thomas Hovenden, whose paintings often reflected the existential crises of slavery. Hovenden’s most famous painting, "The Last Moments of John Brown," imagines the notorious abolitionist kissing a baby as he was led away to be hanged for inciting a slave rebellion.

In May 2015, K. Hovnanian Homes agreed to buy the property from Roy and Ann Wilson, along with two of Ann’s siblings, who inherited the land and property when Nancy Corson, the great-granddaughter of George Corson and his wife Martha Maulsby, died in 2012.

The Wilsons, who have lived on the property since the 1980s, declined to be interviewed. But in a conversation with the Philadelphia Inquirer last month, Roy Wilson intimated that the property had become too costly for the couple to maintain.

The descendants will sell the property for an undisclosed amount contingent upon K. Hovnanian getting approval from the Whitemarsh Township Board of Supervisors to build the townhouses. Hovnanian subsequently agreed to buy an additional nearby parcel totaling 2.74 acres for the townhouse development. 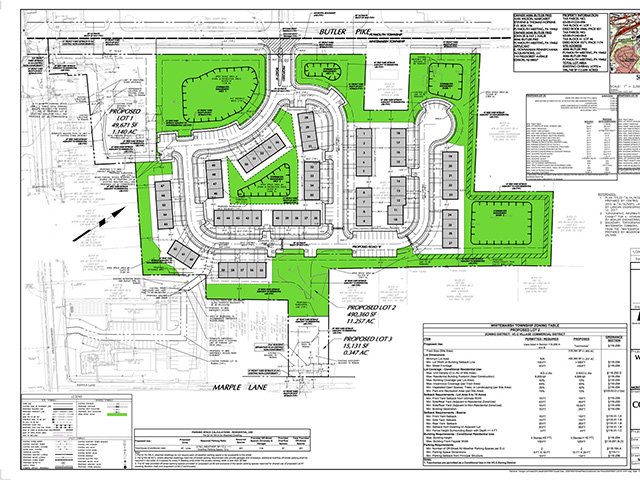 K Hovnanian Homes' plans for the nearby development of the Corson property. The top left corner shows the lot that would be left for the site's historic structures.

Barry McCarron, division president of K. Hovnanian, said the company listened to community concerns and revised its original plans to include more land around the historic structures, which will be sold off to a third party.

"We have an obligation to Roy and Ann Wilson ... to pursue this approval in accord with our agreement with them," McCarron said. "They are the ones who have the property rights at this point and they have the right to sell this property to whomever is suitable to them."

But nearby residents, historians and preservationists are uneasy about the proposed changes at the Plymouth Meeting property that played such an integral role in 18th-century blacks' struggle for emancipation.

Barry Rauhauser, executive director of the Historical Society of Montgomery County, said area residents are dissatisfied with what they perceive as a lack of concern for preserving the historic site. A major concern is that selling the properties without some accompanying land would divorce them from their context and make the property unsustainable.

"The community has basically said, ‘We’re not happy with the potential for this," Rauhauser said. "We’d like to raise the bar for this potential site. What you’ve given us now isn’t enough to be sustainable. We want something different."

Philadelphia scholar Charles Blockson grew up helping his craftsman father maintain the Corson properties, and penned National Geographic’s 1984 cover story on the Underground Railroad, which he described as "a network of paths through the woods and fields, river crossings, boats and ships, trains and wagons, all haunted by the specter of recapture."

"I think they should keep it all together as a parcel, tell the whole story," said the founder of the eponymous Charles L. Blockson Afro-American Collection of 500,000 historic materials at Temple University.

He said the proposed changes are "turning my stomach."

It was Blockson, who describes himself as a good friend of Nancy Corson, who encouraged her to apply for a Pennsylvania Historical Marker for the site. "She was a beautiful person," he said. 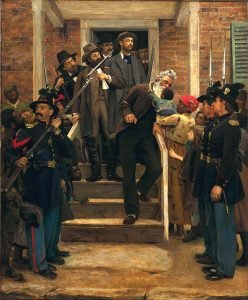 "The Last Moments of John Brown" by Thomas Hovenden, the son-in-law of George Corson.

Nearby residents who founded Friends of Abolition Hall are challenging Hovnanian’s application for conditional zoning approval on the grounds that their plans violate the area’s zoning laws to protect natural and historic resources, according to FAH convener Sydelle Zove.

"The fate of the historic structures is significantly undermined by the current plan, which fails to address how these buildings might be repurposed, how they would be marketed, what it might cost to stabilize and improve them and how any potential adaptive reuse would be able to comply with Township standards for parking and egress," Zove said in an email.

"I’ve been interested in this homestead a long time," she said in a phone interview. "It never occurred to me when Nancy died that it would come to this state. I just assumed somehow it was protected. I was shocked and disturbed when I discovered that it wasn’t."

In the best case scenario, Zove and Blockson said they would like to see local, state and federal officials intervene to save the entire site for historic legacy proposes. Nancy Corson herself advocated that the entire site be "registered as a Historic Place by the National Park Service" in her application to state officials for a historical marker, according to Zove.

In the worst-case scenario, they would like K. Hovnanian to add additional acreage surrounding the three properties. "Without a little bit of property, without the context, it’s not a sustainable site," Rauhauser said.

"It’s really of national importance," said David Contosta, a history professor at Chestnut Hill College and a member of the Friends of Abolition Hall. "And we know that the developer has their right to develop it. What we would like to do is work out some kind of compromise."

Of the disputed property, he said, "You can read about it in the history books...but actually seeing it and being there makes it real. I mean, just imagine how terrified these people were when they arrived."

Pennsylvania Senator Vincent Hughes, who represents Pennsylvania’s 7th District, previously said on WURD radio about the standoff: "We must take what is historic and do something transformational."

When contacted, through a spokesman, Hughes said that his office is "working on a plan for the rest of the month that aims to preserve the significance of that site." He declined to elaborate.

For now, K. Hovnanian Homes is "just trying to see this process through to its conclusion," McCarron said, calling getting the zoning approval "the biggest hurdle we need to overcome."

The Whitemarsh Township Board of Supervisors takes up the issue again Thursday, July 19 when representatives of K. Hovnanian Home will cross-examine Mary Werner DeNadai, an expert testifying on behalf of Friends of Abolition Hall.

To learn more about the historic properties, visit AbolitionHall.com.

Elizabeth Coady is a regular contributor to the Local.