Hockey twins to play at UMass

by Tom Utescher Allie and Brooke Sabia, twin sisters from Lafayette Hill, verbally committed to accept field hockey scholarships to the University of Massachusetts in April of 2011, but didn’t …

Hockey twins to play at UMass

by Tom Utescher Allie and Brooke Sabia, twin sisters from Lafayette Hill, verbally committed to accept field hockey scholarships to the University of Massachusetts in April of 2011, but didn’t actually sign their agreements until last month. In the interim, the thought of switching schools never came up for the Mount St. Joseph Academy standouts.

[caption id="attachment_11849" align="alignleft" width="300" caption="Mount St. Joseph Academy’s Sabia sisters form a mirror image as they sign national letters of intent to play field hockey for the University of Massachusetts. At left is right-handed Allie, and at right is southpaw Brooke."] 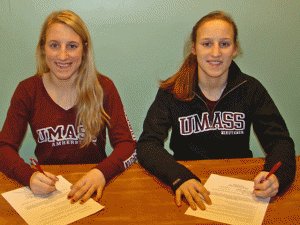 “When we visited UMass, everything about it exceeded my expectations,” Allie enthused. “I loved the coach and the team, I loved the location and the school itself. I thought it was the perfect fit.”

“We loved how it had a campus feel, but it’s still near a city,” Brooke said. “It seems like a good college town.”

Before entering the Mount, the Sabia sisters were grade-school standouts at Chestnut Hill’s Norwood Fontbonne Academy. In their junior season at the Mount, they were starters for the Magic team that won the Athletic Association of Catholic Academies tournament and advanced to the semifinals in the PIAA state championships.

Both girls also participate in track as well as field hockey, where their 5’1” stature can be an asset. In addition to playing hockey for the Mount team, they’re members of the high-powered Mystx club organtization, and their squad finished second in the nation in their division at the 2011 Hockey Festival. Since Mount St. Joe does not have an artificial turf field, the twins sometimes head a few minutes up Germantown Pike to work on their still skills at Chestnut Hill College’s turf facility, Victory Field.

“They’re extremely dedicated to their sport,” affirmed Mount coach Christina Peruto Post. “They play year-round for school and club teams and they spend a lot of time on their own working on things. They’re very tenacious and competitive on the field. They’re both versatile players; you can put them anywhere and they’ll do well.”

Working with their own talented teammates and playing a tough schedule every year with the MSJ Magic helped prepare the duo for Division 1 college competition.

“We got to play against really good people all the time, both on our team and with the other teams we played,” said Brooke. “It taught us to become better.”

Asked if they always intended to play together in college, Allie replied, “That was never going to be the final deciding factor. We like playing together, and we also just had the same interests when we were looking at colleges.”

Brooke may opt for business school; she’s always done well at math, and she enjoyed a course she took recently in government economics and policy.

Commenting on the individual talents of the sisters, Peruto Post observed “Allie was great on our corner inserts, and she was also good on the left post as a scorer. She played on the left side of the field and she really did a good job working the ball up the sideline, passing inside/outside with the people in the middle. I think this past year she improved immensely in her personal defensive skills through the midfield.”

Tuning up her game for college, Allie revealed, “I’m working on my small stick skills, possession, and on slowing down to get a good view of the whole field.”

Brooke said that she’ll focusing on “one-on-one eliminations. I have the speed, but if you don’t have really strong skills to go with it, you’re not getting everything out of it.”

Peruto Post remarked, “Brooke is a very well-rounded player. She has such a strong shot both on her forehand and her backhand. She was really an anchor in the middle of the field for us; a lot of times we put her back as sort of a defensive center mid, but she could also be effective up in the circle.”

This past season the Magic frequently had a number of sophomores and freshmen on the field, and Peruto Post noted that the Sabia sisters “set a great example for the younger players. They also showed trust in the young girls by including them in the play. They didn’t play around them, but rather they pushed the young players to raise their level of play.”