Although the pandemic has been a disaster for so many people, it has forced some others to make choices they otherwise would not have made which turned out to be fortuitous. … 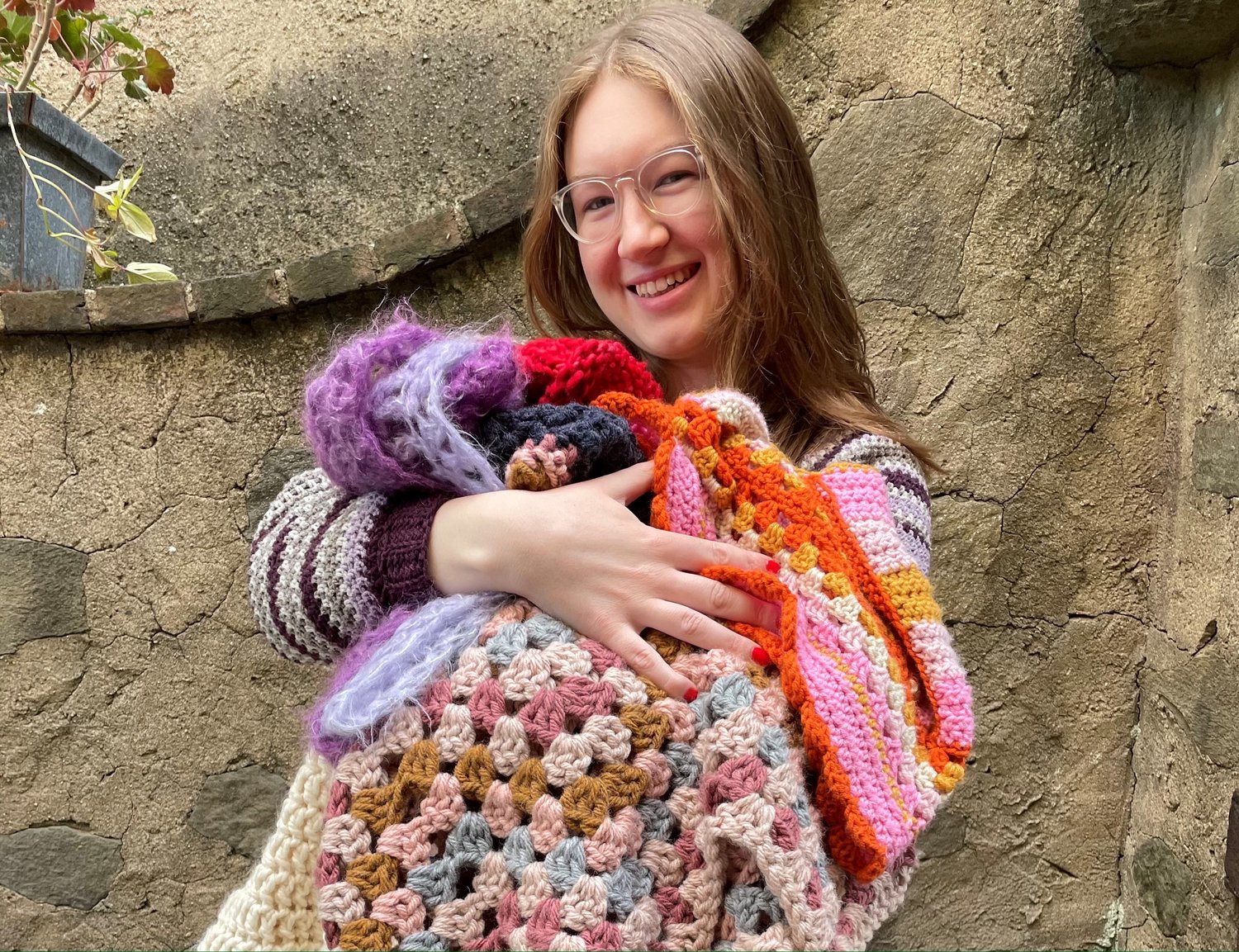 Maddie Megargee has turned her quarantine hobby of crochet into a business.
Posted Friday, May 21, 2021 10:49 am
by Len Lear

Although the pandemic has been a disaster for so many people, it has forced some others to make choices they otherwise would not have made which turned out to be fortuitous. For example, Maddie Megargee, 23, a lifelong resident of Chestnut Hill and recent graduate of Connecticut College with a double major in sociology and French, was not in a position to pursue a career in those fields while in isolation.

Instead, Maddie took up a “quarantine hobby,” crocheting. “I had so much time off that I began buying fabric from Wild Hand in West Mt. Airy ('the supply shop for fiber folk') and crocheting, mostly sweaters. I started an Instagram account, which has been a lot of fun. I have been crocheting every day since then.”

Liz Sytsma, owner of Wild Hand at 606 Carpenter Lane, told us that Maddie, whose love of knitting has turned her into “a fashion statement sensation on Instagram” (according to one fan), “is a customer. I just saw her this morning, She’s incredible and definitely represents a big vibrant community of younger folks doing super-cool stuff with knitting and crocheting. This (younger) generation seems to be super-social justice-oriented, and I see that in how they are selecting yarn, patterns and so on. “We have a lot of under-30 customers near and far doing amazing work.”

Maddie started making her crochet art last July, mostly sweaters with various stripes and colors but also skirts, baby garments and tops, and she has wound up with dozens of commissions. There have been 95 posts to her Instagram account, and most customers have been in the Greater Philadelphia area but also some from as far away as California and France. In April one store in Brooklyn purchased five of her creations.

Will Maddie's crochet art turn into a full-time career? “That would be nice, but it probably cannot be 'scaled.' I want to keep it up, though, even if it is just a hobby or 'side gig.'”

Working from home, Maddie has also joined AmeriCorps VISTA, a national service program designed to alleviate poverty. (Volunteers in Sercide to America — VISTA — was founded in 1965 and incorporated intonthe AmeriCorps network of programs in 1993.) She works with the Mayor's Commission on Aging.

“I signed up for one more year with AmeriCorps,” she said. “After that, maybe graduate school. I am interested in housing and transportation, basically urban planning, but the college I went to did not offer that as a major.”

Maddie is also a very talented artist who recently helped to paint a mural — along with friends Anna Kane and Hannah Lebowitz-Lockard — in the children's room in Hilltop Books, which was opened recently at 84 Bethlehem Pike by the Friends of the Chestnut Hill Library. The charming mural features a floor-to-ceiling chestnut tree and local animals, inspired by Winnie the Pooh and the Beatrix Potter books. One particularly delightful element in the mural is a squirrel sitting in the tree reading a book.

“When I was little, having books on shelves in our house was a wholesome temptation,” Maddie told Stan Cutler, a board member of the Friends of Chestnut Hill Library. “Being able to see, touch and choose from a selection of books is empowering. I'm sure I became a better reader because I chose what I wanted to read.

“My fondest childhood memories are of going to the library every single weekend. I just love books. I think my friends feel the same. I was just so excited when I first heard about having a bookstore in Chestnut Hill. And it's a really nice one. And I really like the idea that it is meant to raise money for the public library.”

Len Lear can be reached at lenlear@chestnuthilllocal.com.