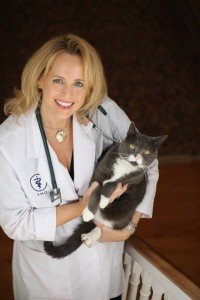 When Chestnut Hill veterinarian Liz Bales, 43, met Susan Lohr, 49, they discovered they had a lot in common. Both were married with two children, and both were animal lovers. More importantly, both were ready to take a career leap. The result? A new start-up.

“Our company is called F.E.E.D. Co. It stands for Feline Environmental Enrichment Design Company,” said Dr. Bales. “We want to improve the lives of cats indoors through environmental enrichment. The first step is to change the way people feed cats.” Note: Bales and Lohr don’t want to change what you feed your cat. They simply want to change how you do it.

“Veterinary science has long known that cats should not be eating from bowls,” said Bales. “In nature, cats catch their prey, play with it, eat it, groom themselves and sleep. They do this 9-20 times within a 24-hour cycle. Quite simply, hunting is a very important part of a cat's physical and mental health."

Bales, who is also a member of the Chestnut Hill Community Association board, says that by feeding cats dry food in bowls, owners inadvertently eliminate the natural bursts of energy that cats require to maintain optimum health. “Bowl feeding results in obesity, lethargy, aggressive behavior and something we call scarf-and-barf where cats eat too quickly, then throw up,” said Bales. Another problem with bowl feeding is “night nudging,” when cats attempt to awaken their owners because they want a snack, which is part of their natural cycle. If you’re a cat owner, chances are you know what it’s like when your cat wants you to get out of bed at 3 a.m.

However, Bales is not suggesting that owners feed their cats more often. That won’t solve the problem. Instead, she has designed The No Bowl Feeding System, for which they have a patent pending, that mimics nature. “Instead of bowls, we designed washable, portion-controlled kibble dispensers (No Bowls) to be hidden around the house so that cats are engaged in an active form of hunting and playing with their food throughout the day and night. Each kit contains five No Bowls which come with a removable fabric “skin" in the form of an adorable mouse,” said Bales.

Don’t want mice in your house? No problem. Bales plans to offer interchangeable skins so your No Bowl can be disguised as fish or birds. While Bales had the veterinary training to design the No Bowl concept, she needed help with marketing. That’s where Lohr’s expertise came into play.

“I had just retired from a career in scientific marketing communications in 2014 and was taking a year off to think about the next chapter of my life,” said Lohr. Originally from Berkshire, England, Lohr studied biochemistry at Oxford University before relocating to Philadelphia in 1997 to work in pharmaceutical marketing. She’s lived in Chestnut Hill since 1998. “I love it here. It’s very European,” said Lohr.

“This is the first product to wean cats off bowls and get them back to the hunt," said Lohr, whose household, in addition to her husband and 10-year-old twins, includes three elderly cats, two standard Poodles and a hamster. “We’re a No Bowl household now. One of my cats was obese. The No Bowl System solved that problem,” said Lohr. “My twins find, fill and hide five No Bowls per cat every morning.” She pointed out another advantage of the No Bowl Feeding System. “It eliminates the need to let your cat hunt outdoors. Cats kill 15% of the bird population annually … The expected retail price will be $50. We are making every attempt to keep this as low as possible. We want it to be accessible to all cats because every cat deserves to hunt!”

Bales grew up in Jenkintown and attended Germantown Academy and Middlebury College. A 2000 graduate of Penn’s Veterinary School, she was affiliated with the Chestnut Hill Cat Clinic and now works part-time at a veterinary practice in New Castle, DE. But the most exciting part of her week is the time she spends at FEED CO corporate headquarters in South Philadelphia with Lohr and three other partners who provide expertise in manufacturing and development.

An unofficial member of the team is Carlos, a one-eyed hairless Sphynx kitten Bales sometimes brings to the office. “We got Carlos because my youngest daughter has allergies,” said Bales. But it wasn’t her daughter who presented the real challenge. “We also have a three year-old, 40-pound lab mix named Plankton who was very excited to meet the new kitty,” said Bales, “But Carlos was scared so we are introducing them gradually. The kitten spends most of his time in my youngest daughter’s room and comes to work with me occasionally.”

Bales credits her daughter’s experience in the Center for Entrepreneurial Leadership at Springside Chestnut Hill Academy for the inspiration to launch her business. “And also so many of the great business people in Chestnut Hill who generously gave me their time and counsel,” she said.

Lohr is excited about the cool packaging they’ve designed and the Kickstarter Campaign launching this month. In August, Bales and Lohr will present the No Bowl System at Super Zoo, a pet trade fair in Las Vegas. “We’re going to change the way people feed their cats!” Bales said.

For more information about the No Bowl Feeding System and tips on caring for cats, visit Dr. Bale’s blog NoBowlCat.com and her Facebook page, The Catvocate.