Nancy Frick, of Lafayette Hill, started out working backstage but is now an accomplished playwright. Her latest effort, "I Just Wanted to Say Hello," will be performed along with other one-act plays … 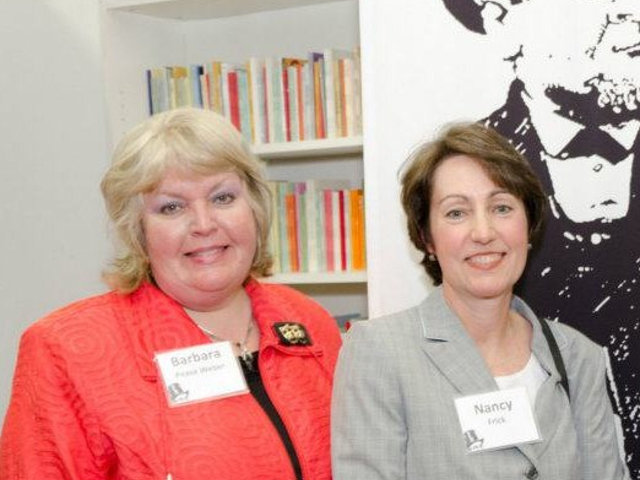 Nancy Frick, of Lafayette Hill, started out working backstage but is now an accomplished playwright. Her latest effort, "I Just Wanted to Say Hello," will be performed along with other one-act plays July 14, 15 and 16 at Old Academy Players, 3544 Indian Queen Lane in East Falls.

For 10 years Nancy Frick of Lafayette Hill was president of Old Academy Players, 3544 Indian Queen Lane  in East Falls. And for the last six years she's been the producer of the company's Summer One-Act Bonanza, which features eight short plays written and directed by eight skilled men and women. The plays, which continue July 14, 15 and 16, include “Matinee” by Jim Fryer, “Surprise” by Mark Harvey Levine, “Are There Blintzes on Mars?” by Dorothea Cahan, and “The World's Oldest Living Drag Queen” by Rob Rosiello. Also, “Crossroads Bar” by Jillian Bosmann, “Dawning of the Silver Iris” by Rob Rosiello, “Juggling Act” by Lisa Lutwyche*, and Frick's “I Just Wanted to Say Hello.”

Frick says she wrote “Hello” the night before the submission deadline for the One-Act Festival. “It had been a little while since I'd written a script, and the One-Act provided me with a great opportunity to get back n the saddle again. More importantly, it gave me a deadline. So I got started by asking myself what I always ask myself as I start a new play: What do I feel passionate about these days? And the answer was punctuated with how so many  millennials communicate today.”

And somehow, from those musings, came “Hello,” a light comedy with a serious point that takes a gentle jab at how we communicate these days, “I hope that with the play, audiences will see their friends, their co-worker and even themselves and have a good laugh at what is questionable progress in the technology we use to communicate today.

“My play centers on a man who moves into a condo populated by  millennials. He can't quite adjust to not speaking to people face to face. The message in the play is that technology is great, but let's not lose what makes us all human and the ability to enjoy human contact.”

Frick was born in Phoenix, grew up in Florida and attended the University of Florida before moving up this way. “I always loved writing, and so for me, the logical choice of majors in college was advertising so that I might be able to earn a living.” Soon after graduation she moved to Lancaster to be near her parents before eventually moving to Lafayette Hill.

Then one day, at the age of 23, while she happened to be strolling along Indian Queen Lane, Frick, with no theater background, saw Old Academy and decided to check inside. “I asked if there was anything I could do, and they put me to work immediately with the crew backstage. It was truly the coolest thing I had ever done, and I fell in love with it from the start. It changed my life and has been part of my life ever since. It was an opportunity I never would have had, and it turned me into a playwright, something I never thought I could be.”

Today, 57-year-old Frick spends some of her time writing for an ad agency when she's not involved with Old Academy or writing plays. She says “I love writing plays, or should I say I love having written them. It's the actual doing part that's tough. Over the years, I've been fortunate enough to have been published and produced across the country, even internationally. Old Academy has been my greatest supporter, having premiered many of my plays, but even before that, given me the opportunity to learn the art of playwrighting.”