Hill native gets high in ‘Tangle’ at Fringe Festival

Hill native gets high in ‘Tangle’ at Fringe Festival 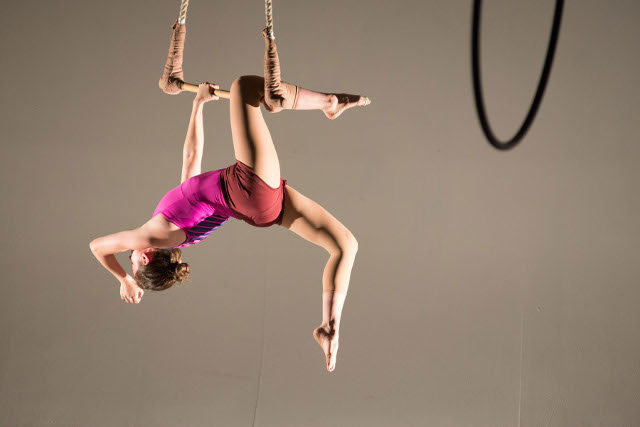 Chestnut Hill native, Lauren Rile Smith, 27, is the founder of Tangle, an aerial dance company of eight women which will be performing “Loop,” a full-length circus and theater show (www.tangle-arts.com/loop) mixing dance, theater and aerial acrobatics as part of the Philadelphia FringeArts Festival on Sept. 18 to 20.

Tangle’s acrobats swing, climb and weave through suspended lengths of rope to embrace — and sometimes to escape — the knots of human connection. Two women’s lives are transformed via trapeze, aerial rope and partner acrobatics, as they make the difficult choice to stay or go. A solitary wanderer is confronted by strangers before she can escape to her next high-flying adventure.

By turns they fight, flirt and finally realize they are stronger together. “Tangle’s” innovative aerial storytelling is staged among sculptural set pieces by artist Julia Wilson. Her woven set pieces are inspired by old-growth forests, the tensile strength of rope and geometric patterns.

According to Lauren, “‘Loop’ differs from our past Fringe Festival shows in that ‘Loop’ takes Tangle's aerial storytelling to a new level. ‘Loop’ follows two women through the difficult choice or whether to stay in the lives they have known or seek new paths. One woman is a solitary traveler who climbs mountains of suspended ropes, but her journey is suddenly hijacked by strangers. By turns they fight, flirt and finally realize they are stronger together.

“In a parallel world, a close-knit trio of entertainers relies on each other to move in unison through the air until one suddenly quits, tired of living life in perfect sync. The women she leaves behind have to rebuild their act — and their friendship — in the wake of her choice …

“We have an interdisciplinary focus, whose work integrates traditional circus like aerial acrobatics with dance, theater and live music. Tangle's work reflects diverse identities, with an emphasis on queer and female experiences.”

‪The New York Times has written about Tangle, "Tangle Movement Arts turns a series of hanging loops into a stand-in for examining precarious relationships.” ‬Tangle is based in West Philadelphia and has been a FringeArts favorite since its inception in 2011.

Lauren, who was once an intern at the Chestnut Hill Local, graduated from Swarthmore College with a degree in English literature and philosophy. After graduation, she made a somewhat unlikely transition and enrolled at the Germantown based Philadelphia School of Circus Arts. "When I started training,” she recalled, “I was inspired by the blend of athleticism, narrative and physical artistry in contemporary circus arts." Smith subsequently undertook further training at LAVA and Ruby Streak Trapeze Studio, both of which are circus schools in Brooklyn.

Currently, Smith works at the Rare Book and Manuscript Library of the University of Pennsylvania. "It allows me to switch gears,” she explained, “between the head-centered world of books and libraries and the body-centered world of training circus arts. I chose the name Tangle for our acrobatic performance company because we are all about the possibilities that arise when things get complicated. Tangle also evokes the shapes of bodies you might see onstage when we perform.”

In a previous Fringe Festival performance by Tangle, Lauren was asked to explain their performance briefly to an eight-year-old. Her reply: “Seven women get together for a party—on aerial silks, trapeze and other circus equipment. We’re going to climb the furniture, carry each other around and make new enemies and friends.”

At the time one of the performers in Tangle was seven months pregnant during the show. “Let me tell you,” Lauren said. “Trapeze is really hard, and it’s even harder when you’re doing pull-ups for two! Tangle is all about diverse expressions of female strength, so I love it.”

After performing "Loop" at the Fringe Festival, Tangle will be bringing its eclectic, family-friendly outdoor circus performance, "tinycircus," to the Cynwyd Station Café, 375 Conshohocken State Rd., Bala Cynwyd (610-668-1290) on Oct. 5.

Tickets ($15-20) to “Loop” are now available via www.tangle-arts.com, with discounts for students, seniors, artists and groups. For more information, visit www.tangle-arts.com/loop, or you can follow them on Facebook at facebook.com/tangle.arts.