Stan Cutler, a Chestnut Hill resident for 22 years and a Germantown resident for 20 years before that, is known as a stalwart cheerleader for the local library. 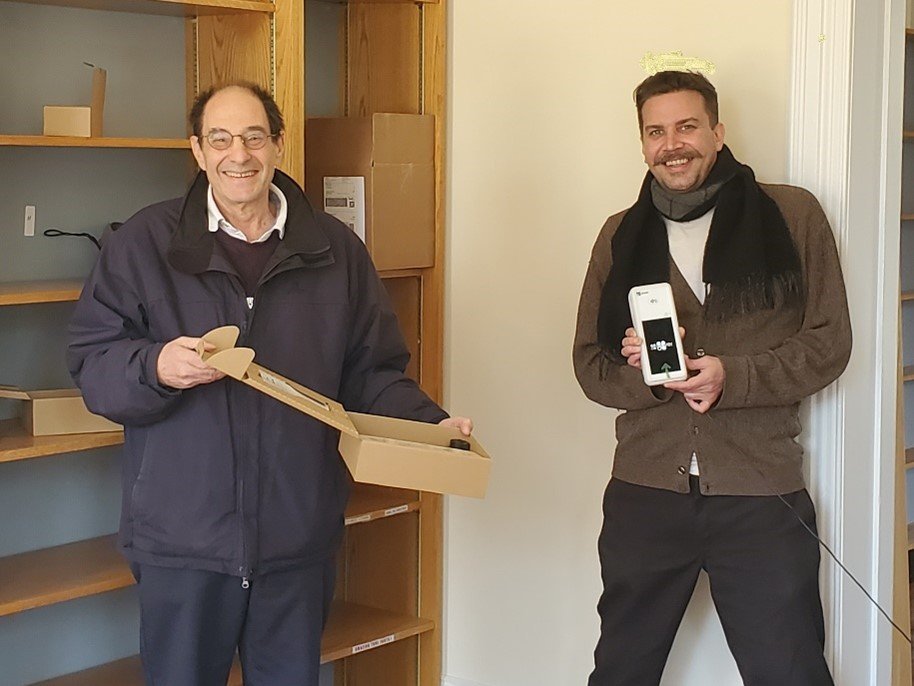 Stan Cutler (left) and James Gleeson are seen with the Friends of the Chestnut Hill Library Book Store’s point-of-sale terminal when it was new two years ago.
Posted Thursday, November 10, 2022 12:00 am
by Len Lear

Stan Cutler, a Chestnut Hill resident for 22 years and a Germantown resident for 20 years before that, is known by many of his friends and neighbors as a stalwart cheerleader for the local library.

And two years ago, as an active volunteer for Friends of the Chestnut Hill Library, he and others were instrumental in creating Hilltop Books, the community bookstore at 84 Bethlehem Pike.

He put in this effort, he told the Local, “to preserve Enlightenment values from the perils of digitized communication.”

A longtime teacher of students of Temple University's Osher Lifelong Learning Institute, Cutler doesn’t just read books. He also loves to write them. Eight in the past 14 years, in fact.

And now, two weeks shy of his 79th birthday, he’s in the process of getting them published. Cutler, like many others, is self-publishing his books – which means he’s on his own when it comes to marketing. He said he gets support from Indiebound.com, an organization that supports independent bookstores, and also contacts book clubs.

“Not only does the writing take a great deal of time, but the promotion of your books is so time-consuming,” he said. “And you have to do social media.”

His books include what he calls his “Boardwalk Trilogy: Low Light, The Subversive Detective and The Reluctant Spy.” Also what he calls “two cyber mysteries, Phished and Three Percent of the Vote.”

“The Subversive Detective” is a particularly poignant historical espionage thriller in which Atlantic City police detective Dave Levitan investigates an execution in 1944 and discovers a deep-cover Nazi spy and team of German saboteurs hoping to derail the American war effort. It’s an intriguing plot that could make an exciting movie.

“Some of the characters are drawn from my immigrant grandparents,” Cutler said. “I was a teenager when they all passed away, and I vividly remember their quintessentially American ways, flavored with strudel and matzo balls.”

“Writing is a full-time job, which I approach as years-long projects with milestones to reach, like chapter completions or agent submissions,” he said. “I do at least 50 drafts of the first page for each book, and I work on several books at the same time. Every book has very different plots and very different villains.”

Before becoming a full-time writer 14 years ago, Cutler had careers as a history teacher, art salesman, college professor, vagabond, computer programmer and finally as a systems design consultant to Fortune 50 companies and government agencies. He has undergraduate and master's degrees from Penn State University and a degree in computer systems technology from Spring Garden College.

Despite his switch to full-time writing, the Southwest Philadelphia native still finds time to teach American history, “using rhetoric and media studies as the lens,” he said.

“Eventually, I got tired of listening to sophomores give speeches,” he said. “I endured 1,800 of them.”

Cutler began his career teaching social studies in Philadelphia public schools. After writing a thesis on the rhetoric of Malcolm X, he joined Penn State’s Speech and Communications faculty where he learned how to take command of a classroom.

“I much prefer teaching in person,” Cutler said. “It's a much better learning experience. Remote learning has too many limitations. I don't like this new world at all, the 'faster, better, cheaper' ethic. Everyone is jumping on the technology bandwagon. Real communication does not take place better, faster and cheaper, especially in teaching.”

Cutler also had a fascinating experience teaching teachers in Norway for one year. Norway had an influx of Pakistani and Indian students at the time, and many Norwegian teachers were apparently having a hard time with the culture clash and language barrier.

“It was a good gig because I was single at the time, and I had a crash course for six months in the Norwegian language before leaving the U.S.,” Cutler said. “The down side was that they have really long winters, and it's cloudy all the time…You would kill for a little bit of sunshine.”

Cutler's wife, Valerie, has been the subject of two dozen gardening articles in the Chestnut Hill Local, and their daughter, Betsy, is a Mt. Airy resident who works as a paralegal.

For more information about Cutler's books or to order them, visit stanleycutler.com. Len Lear can be reached at lenlear@chestnuthilllocal.com