Chestnut Hill fabric artist Melissa Maddonni Haims, is one of several area artists who will be featured in the Woodmere’s annual juried exhibit that begins this month.[/caption] By Len Lear and … 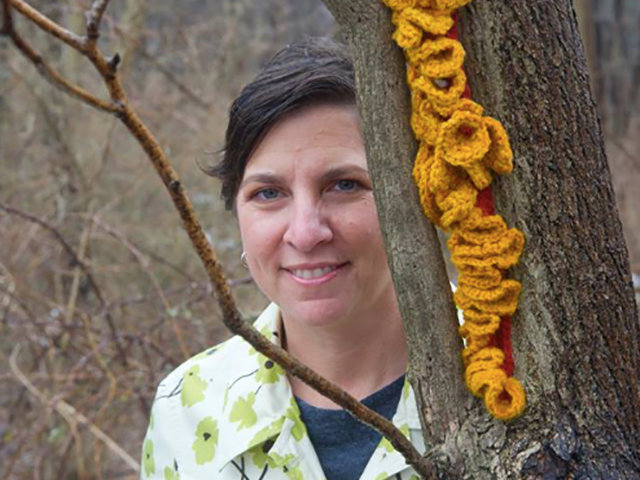 Chestnut Hill fabric artist Melissa Maddonni Haims, is one of several area artists who will be featured in the Woodmere’s annual juried exhibit that begins this month.[/caption]

By Len Lear and Sally Cohen

The Woodmere Annual highlights contemporary work in a wide variety of media by artists living within 50 miles of the museum. Each year, a distinguished juror is asked to select works and organize an exhibition that makes a statement about current practices in the arts of Philadelphia. The Quaker concept of “speaking truth to power” is a central tenet of this year’s exhibition.

Philbrick, a noted specialist in contemporary art, has curated an exhibition that highlights the intersection of art and politics, addressing recent challenges to our country’s civil liberties, moral fabric, social compact, political institutions and environmental issues.

“The Woodmere Annual has been a first experience exhibiting in a museum for many generations of Philadelphia artists,” said William Valerio, PhD. Executive Director of Woodmere Art Museum. The exhibition will be accompanied by an illustrated digital catalogue that will appear on the museum’s website, and several endowed prizes will be awarded.

One of the contributing artists will be Chestnut Hill fiber artist Melissa Maddonni Haims, who has gained lots of attention from the media in recent years for her “yarnbombing” since 2010. Her work has been shown in galleries, museums and is held in private collections throughout the U.S. She was recently featured on an A&E network television program about artists who make work out of unusual materials.

Haims explores recycled, reclaimed and rescued materials, primarily fabrics and yarn, and creates large scale crocheted and knitted works mixed with found objects. For example, from March through October of last year at Morris Arboretum, Haims adorned trees with sweaters, peaked roofs with patchwork shawls and bridge spindles with bright knee socks, as if to ward off the spring chill. According to one observer, “She hasn’t yarnbombed the place as much as she’s ‘yarnswaddled’ it.”

The installation, which covered 10 structures, comprised 25,000 yards of yarn hand-knitted and crocheted over the course of more than a half-year. Haims commissioned Andrew Dahlgren, a designer and teacher at The University of the Arts, to machine-knit an additional 21,000 yards of yarn. Working on her own and with periodic help from volunteers, the installation alone took 10 days.

In another one of her stunning exhibits, from June to August of last year, “Creep,” Haims’ installation in “The Faces of Politics: In/Tolerance,” ran at the Fuller Craft Museum in Boston. In the exhibit, Haims memorialized children killed by gun violence in the U.S. in 2015, crocheting a ball for each one; the total came to nearly 3,000.

According to Cate McQuaid, an art critic for the Boston Globe, “All 3,000 crocheted balls are not here — that would overwhelm the gallery — but those that are here spread over the wall and around the corner like black mold. Visitors are invited to sit at a school desk where Haim has left a list of the fallen, and write one of the names on a long ribbon, which she will incorporate into another artwork. In red pen, I recorded the name of Honesty Jackson, 11. ‘Creep’ hit me in the gut with its sheer numbers and the grandmotherly love associated with crochet.”

Haims had another fascinating exhibit for two months at the Schuylkill Center for Environmental Education in upper Roxborough called “Cold Comfort.” In the display, Haims “knit-bombed” the center, enlivening the brown and gray winter landscape by wrapping tree trunks with brightly colored yarn cozies. Thirty separate installations were made from yarns, Madagascar grasses and “plarn” (plastic bags made into yarn) appeared along the center’s Widener Trail and main driveway, inviting winter travelers to stroll the woods and see them anew.

Another exhibitor in the new Woodmere show will be Mt. Airy artist Mia Rosenthal, who made a big splash with her three-month exhibit in late 2015, “Paper Lens,” in the Penna. Academy of Fine Arts’ Morris Gallery. Rosenthal’s works were based on a tour of the Large Hadron Collider (LHC) at CERN, the European Organization for Nuclear Research located in Switzerland.

“The LHC really captured my imagination,” she said, “a giant machine deep underground with a circumference of 17 miles, built to detect the smallest of particles, being used by hives of scientists, trying to decode the fabric of the universe.”