Chestnut Hill area residents Jay Roberts (from left), Mary Ann Baron and Christina Kobland were among those who have protested the slaughter of deer that takes place every winter in Wissahickon Park. … 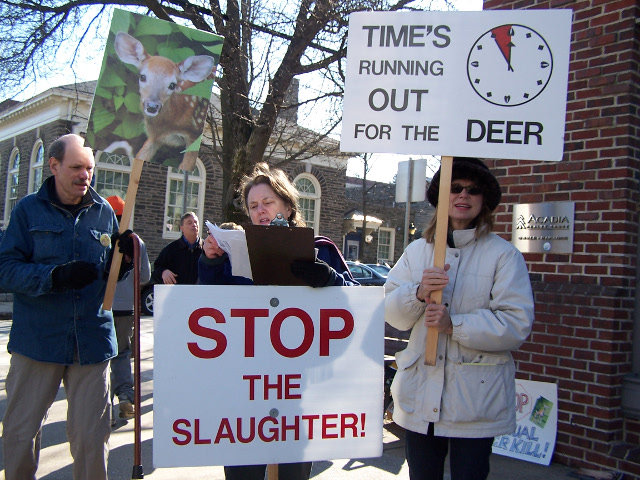 Chestnut Hill area residents Jay Roberts (from left), Mary Ann Baron and Christina Kobland were among those who have protested the slaughter of deer that takes place every winter in Wissahickon Park. The protest took place at the corner of Gravers Lane and Germantown Avenue for two hours.

The annual killing of deer in Fairmount Park, which began Dec. 1, will end this year on March 31. The annual kill, announced by the city as a “one-time-only” event by then-Executive Director of the Fairmount Park Commission, William E. Mifflin, back in 1999, has presently been going on for 15 consecutive years. Since then over 1,000 deer have been killed in the Wissahickon, according to the Park Commission's own statistics.

Those who support this annual slaughter, including the city and the Friends of the Wissahickon, are not usually eager to discuss the situation publicly. Some local residents, however, who are opposed to the killing in their back yards are anxious to have the issue reexamined by elected officials and the community at large.

On Jan. 13 of this year, Chestnut Hill residents Mary Ann Baron and Bridget Irons, co-founders of Philadelphia Advocates for the Deer (PAD), met with 8th District City Councilwoman Cindy Bass to air their concerns about the ongoing slaughter in the park. They were accompanied by fellow PAD member Jay Roberts of Flourtown. Also present was Patrick Jones, Director of Constituent Services in Cindy Bass’ office.

Ms. Irons spoke on the issues of safety and documentation. She said she has often seen bikers and dog walkers in the park during the nightly 8 p.m. to 6 a.m. curfew. She also said that she put in a request to see the city's Application for the Deer Control Permit from the game commission under the Pennsylvania Right to Know Act, but has not heard back.

The application would contain maps, information on safety zones, deer surveys and huntable areas. Irons provided Patrick Jones, of Ms. Bass’ office, with the information needed from Parks & Recreation, which Jones took. He also agreed to look into getting a copy of the application. “This decimation has been going on for 15 years,” said Irons, “and it’s not working. The city has gotten more secretive over the years. There's no transparency. It's just done. The last scientific study was in 1996.”

It is a matter of public record that payments by the City of Philadelphia to the U.S. Department of Agriculture for killing deer in Fairmount Park from 2001 up to and including year 2014 total $347,836.72. This amount does not cover the cost of paying city employees for various responsibilities before and during the slaughter.

Also at the Jan. 13 meeting, PAD member Jay Roberts spoke about the cruelty of the killing and the need to stop the cycle of violence in our neighborhood parks, where families and children first experience the wonder of nature. Bass said she loves animals and has pets but that this issue is not a priority for her, and that she had never received complaints from constituents about the deer issue.

Baron replied that it IS a priority for some area residents, especially those who don’t want the killing going on in their neighborhood. She said that she and other PAD volunteers have spoken to hundreds of people in Chestnut Hill over the years and that many were shocked and saddened to hear about the ongoing city-backed violence.

Although the representatives from PAD requested a meeting with either Michael DiBerardinis, or Mark Focht of Parks and Recreation, in a follow-up email to Baron on February 26, Jones said he has done some research and is planning to meet with P & R and the Friends of the Wissahickon on his own.

On Monday, March 2, I spoke with Elliot Griffin, Cindy Bass' Director of Communication. She (Elliot is a woman) told me that, regarding Ms. Irons right-to-know request to see the city's application for the deer control permit, the city has a legal responsibility to respond to it. She said that no one from the Councilwoman's office was trying to give PAD "the runaround" but that there was nothing they could do to speed up the process.

I also asked about the issue of Patrick Jones meeting with Parks and Recreation and Friends of Wissahickon on his own rather than along with PAD representatives. Ms. Griffin replied that since Mr. Jones has already met with PAD, he felt is was appropriate to meet on his own with all others who are "stakeholders" in the situation to get their opinions.

She speculated that perhaps a meeting of all the concerned groups could take place at some future date. "This issue is definitely not at the top of the Councilwoman's list," Griffin said. "She is more concerned with making sure all rec centers are safe and accessible and that schools are properly funded. She does, however, care about the concerns of all her constituents."

For her part, Baron says she is staying in touch with the Councilwoman’s office. “We met over a month and a half ago,” she says. “The time is now. We need more action, and we need support from other people who believe in this cause. Folks who would like to sign the petition to Councilwoman Cindy Bass, and lend their voices to stop the 15 years of killing the deer in Fairmount Park can go online to phillydeeradvocates.com and click on ‘SIGN OUR PETITION.’”