Acclaimed harpist Gloria Galante will perform with an all-star jazz ensemble Thursday, Aug. 30, 7 to 10 p.m., at the Platinum Grille, 7719 Crittenden St. by Len Lear One normally thinks of a harpist … 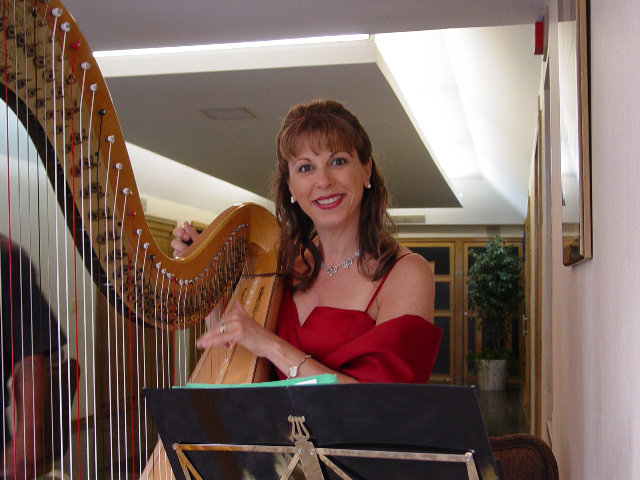 One normally thinks of a harpist in connection with angelic, heavenly sounds — classical music played at a wedding, funeral or other ceremonial event. In other words, as different from a jazz session as a firefly is from a fire truck.

Yet, acclaimed harpist Gloria Galante is one member of an all-star jazz ensemble who will perform the music of jazz legends Cannonball Adderly, Benny Golson and John Coltrane Thursday, Aug. 30, 7 to 10 p.m., at the Platinum Grille, 7719 Crittenden St. in Chestnut Hill.

Since I have never heard of a harpist playing jazz before, I was naturally curious.

“Vocalist Arlene Hilton (from Mt. Airy) was putting together a concert for Alice Coltrane, who played harp with her husband John Coltrane,” said Gloria. “Her birthday is Aug. 27, so it is coming up soon.

“My duo partner, Odean Pope (Blue Note recording artist), a saxophonist, was playing a concert with Alice Coltrane and Pharaoh Sanders in 1989. He asked me to attend the concert and introduced me to the group. I was so happy to meet Alice. We became friends. She would review my compositions and recordings and send me her input. I always offered her my harp when she came to Philadelphia. We even have a picture together from that day.”

Galante, whose age is “over 21,” grew up in Fox Chase and graduated from Cardinal Dougherty High School, West Chester University (BS,1983), Vandercook College of Music in Chicago (Master’s in Music, plus 30, 1993) and the Music for Healing and Transition Program (2001). Today she is a professor at West Chester University, where she founded the harp program in 1987. “The teacher who most inspired me was Edna Phillips, the first woman principal harpist in the Philadelphia Orchestra (and any major symphony at that time).”

Gloria’s younger sister, Elaine Galante, plays the flute, and her grandfather liked to sing. “I decided to play a musical instrument in the Cardinal Dougherty High School Orchestra,” she recalled. “The orchestra director had only three instruments left to fill, which became my only choices — the trombone, tuba or harp. I choose the harp because the school had a beautiful Lyon and Healy Harp. I played the piano since age 7, and it was similar.” 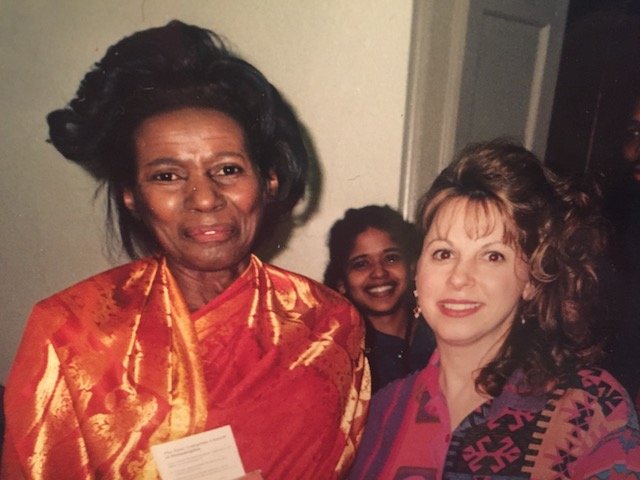 Galante is seen here in 1989 with her good friend, Alice Coltrane, wife of the legendary John Coltrane, whose music will be played next week at a Chestnut Hill venue. Alice, who will turn 80 next week, played the harp with her husband.

Galante has performed at the Philadelphia Kimmel Center, Academy of Music, Bethlehem Musikfestival, Tesla Festival for the Royal Family of Serbia, in Japan for three months, Australia for one month and Puerto Rico for two years as well as for the Frank Sinatra Orchestra and Diana Ross Orchestra, among others. “My favorite city, though, is Philadelphia, my hometown. There is no place like home.”

Of all those countless performances, Galante’s most memorable one was “playing for Pope Francis in Philadelphia. It was a very spiritual experience.”

What was the most unexpected thing that ever happened during a performance?

“I was playing for my piano teacher’s wedding. A pedal rod broke, which left me in the key of B-major — 5 sharps. I had to transpose all the music to that key in order to fulfill my performance.”

In addition to breaking down barriers by playing the harp with a jazz combo, Galante, who now lives in lower Bucks County, is also making history as the first certified music practitioner (CMP) to play for in-vitro fertilization (IVF) patients to reduce anxiety during their medical procedures at Abington Hospital.

She participated as a CMP and was part of an IVF team of doctors, nurses and embryologists in a two-year study conducted by Dr. Larry Barmat, Director of the Donor Egg Program at Abington Reproductive Medicine and President of the Philadelphia Area Reproductive Endocrine Society.

The study results showed that live harp music lowered the anxiety in IVF patients in five minutes. (They received 30 minutes of live music.) More than half became pregnant. “I play the harp during the IVF Transfers,” said Galante. “The fertilized embryo is being transferred to the woman. I also play for Crossroads Hospice as patients are transitioning.”

What is the best advice Galante ever received? “Always remember to make your harp sing from your heart.”

If Gloria could meet and spend time with anyone on earth, living or dead, who would it be? “I would love more time with my harp teacher.”

For more details, visit gloriagalante.com or mhtp.org (Music for Healing & Transition). You can see several videos of Galante playing the harp on YouTube. Len Lear can be reached at lenlear@chestnuthilllocal.com

A Rose by any other name is still a fine actress

Donate now to CH Local
The Latest
Important questions for voters on May 18
Under a much more quiet set of circumstances than last November, local voters again are heading to the polls to vote in a primary election. So-called “off-year” elections, in which …

Anthony Kroch, linguistics professor
Anthony (Tony) Kroch, Professor Emeritus of Linguistics at the University of Pennsylvania, died of cancer at the age of 75 on April 27 in his home in Mt. AIry. He was attended by his wife, family and …
Founders Day marks another opportunity to help local aid agency Face to Face
On May 13, 1984, the dining room doors opened for the first time at Face to Face in Germantown. The idea was simple: much like a soup kitchen, it would offer hot meals for locals, no questions asked.

25-year publishing dream comes true for Hill sisters
Twenty-five years ago sisters Abby Pete and Leslie Pontz hired an agent to find a publisher for a proposal they had for a children's book of theirs that would be called “Harvey the Hippo.”
Development plans next to Pleasant Playground hinge on pollution at the site
The contested development plans for a 34-unit apartment building next to Pleasant Playground in East Mt. Airy hinge on known pollution at the site and what will eventually be done with it.