Oliver Sewell (left) and Meryl Dominguez played the lead roles of Alfredo and Violetta, respectively, in the Academy of Vocal Arts' portrayal of the opera "La Triviata." (Photo by Don Valentino) by … 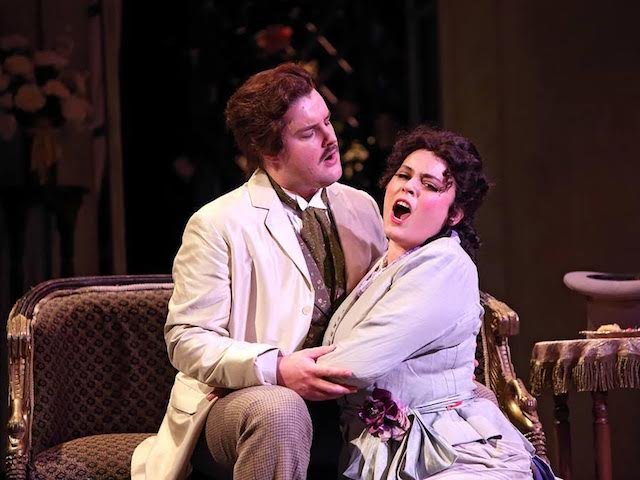 Oliver Sewell (left) and Meryl Dominguez played the lead roles of Alfredo and Violetta, respectively, in the Academy of Vocal Arts' portrayal of the opera "La Triviata." (Photo by Don Valentino)

St. Paul’s Episcopal Church, Chestnut Hill, marked the third Sunday of Easter with a Choral Evensong led by parish music director Zachary Hemenway and featuring the parish’s Adult Choir and Michael Smith accompanying at the Church’s Aeolian-Skinner pipe organ. Smith is the music director at St. Thomas Episcopal Church, Whitemarsh. With Hemenway set to depart his position at St. Paul’s for a similar post at Epiphany Episcopal Church in Seattle after services Sunday, June 3, this was his penultimate Choral Evensong. One more remains on the docket – Sunday, April 29.

The two major works of the service were the “Magnificat” and “Nunc Dimittis” from Herbert Brewer’s Evening Service in D. Brewer caught the celebratory character of the “Magnificat,” the Virgin Mary’s exultation at learning from the Archangel Gabriel that she has been chosen to give birth to Jesus, who Christians believe to be the Son of God.

Brewer set the words found in St. Luke’s Gospel in a style both energetic and subtle. For the “Nunc Dimittis,” St. Simeon’s hymn of gratitude to God for allowing him to see the Messiah before his life on earth has been brought to a close, Brewer chose a gentler, more pastel palette of tones and harmonies and rhythms delineating an acceptance that all has been completed.

In both scores, Hemenway elicited exemplary singing from his choristers. Balance between the vocal parts was unimpeachable, with the inner voices (especially the tenors) singing out with commanding conviction. Tuning was flawless, and diction was immaculate. Smith accompanied supportively. Edward Cuthbert Bairstow’s “Sing ye to the Lord” was the anthem at the Offertory. It sported trumpet stops from the organ in accompaniment to celebrate through stirring sounds the Easter season, when Christians believe that Christ rose from the dead. Hemenway and the Choir gave it a thrilling reading.

During Zachary Hemenway’s 10-year tenure as music director at St. Paul’s Church, many other young church musicians have graced its splendid pipe organ. One such organist is Bryan Dunnewald, a graduating student at Philadelphia’s Curtis Institute of Music. Dunnewald was commissioned to compose a choral setting of the Roman Catholic Church’s Latin Mass for Robert McCormick, the music director of St. Mark’s Episcopal Church on Locust Street, and its choir.

By either happenchance or destiny, I attended the Choral High Mass at St. Mark’s Church Sunday, April 22, and heard Dunnewald’s “Missa Brevis Sancti Marci” performed by the forces for which it was written. The 23-year-old composer’s score for choir and organ beautifully projects the penitential mood of the “Kyrie” (the only part of the Ordinary still in Greek), the festive character of the ”Gloria,” the sublime awe of the ”Sanctus” and the plea for mercy of the “Agnus Dei.” Dunnewald, who is planning to continue his education next fall at the Mannes School of Music in New York City, conducted his “Missa brevis” himself. He drew expressive singing from St. Mark’s choir, one of the region’s finest mixed professional/volunteer choral ensembles. 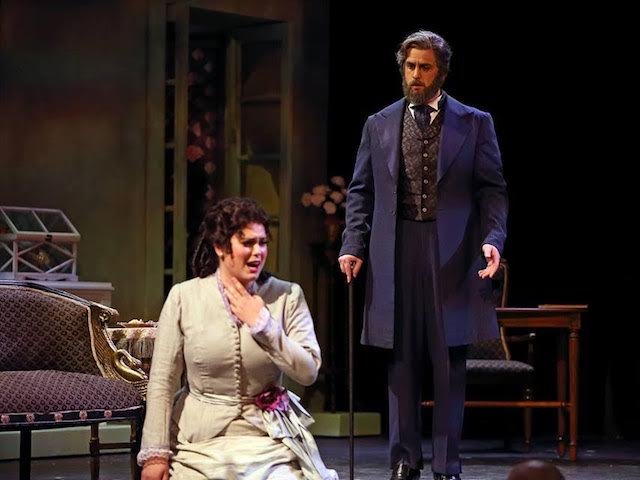 The Academy of Vocal Arts opened its final fully staged production of the 2017-18 season Saturday, April 21, in its Helen Corning Warden Theater at 1920 Spruce St. The opera was Giuseppe Verdi’s “La Traviata” (The Fallen, or Lost, Woman), and performances continue through May 5.

“La Traviata,” along with “Rigoletto” and “Il Trovatore,” forms that trio of middle opuses that close out Verdi’s early, rough-around-the-edges works and begin his more mature body of work, leading to the culminating Shakespeare-based “Otello” and “Falstaff.” While “La Traviata” is still characterized by orchestration that can only be generously described as primitive, Verdi here achieved a higher level of musical characterization and smoother degree of narrative exposition.

“Traviata” is also the only opera Verdi composed that is set in his own epoch of the 19th century. Its basis is the 1852 play, “La Dame aux Camelias” (The Lady of the Camellias), by Alexandre Dumas the Younger. It was based on the original novel of the same name by the same author. Sarah Bernhardt and Eleanora Duse were among the mot famous actresses of the era to portray the title character, Marguerite Gautier. Her most famous portrayal on the silver screen belongs to Greta Garbo in the 1936 M-G-M masterpiece, “Camille.”

Verdi was so taken by “La Dame” that he and his librettist, Francesco Maria Piave, had “La Traviata” ready for the 1853 season of La Fenice Opera House in Venice. Since one assumes that Dumas changed the names in the novel and play to protect the innocent, one might also assume that Piave and Verdi were protecting the guilty when they changed the names yet again. Marguerite became Violetta Valery in the opera, and her lover, Armand Duval, became Alfredo Germont. While Piave’s drastic reduction of the play’s script into the opera’s libretto does, indeed, save the audience lots of time in the theater, it also does away with many delightful scenes while undermining more than a few helpful strands of motivation. Still, Verdi’s gifts are fully on display in “La Traviata” and go a long way to making the story work theatrically, even if it doesn’t quite hold water intellectually.

Saturday evening’s performance was conducted by music director Christofer Macatsoris. Stage direction was by Jeffrey Marc Buchman. The work of both came together to offer an interpretation that was powerfully sung and played and inconsistently acted. Macatsoris elicited extraordinarily visceral singing from his young cast. Buchman’s use of AVA’ small stage, however, left me fully aware of just how small that stage really is. Plus, he drew more than a handful of characterizations from the cast that made the scene-eating extravagances of silent film actors and actresses pale by comparison.

Soprano Meryl Dominguez gave a highly charged rendition of Violetta’s music. She caught the throbbing desperation of a woman grasping at one last chance for true love after a dissolute life as a Parisian courtesan, all the while fearing the death by consumption that did, indeed, finally take her life. Tenor Oliver Sewell didn’t quite cut the romantic figure achieved by Robert Taylor in “Camille,” but he sang the part of Alfredo, Violetta’s beloved, with admirable beauty of tone and intensity of phrasing.

Baritone Timothy Renner was a commanding presence as Giorgio Germont, Alfredo’s father and the protector of the family’s honor. Verdi gave him the score’s most beautiful music. With more attention given to a clear projection of sound, Renner should turn into a fine singing actor. The remainder of the cast performed well.

Peter Harrison’s set design, Allen Doak’s lighting and Val Starr’s costumes and wigs conjured up mid-19th century Paris at a level of quality that would have made M-G-M’s Louis B. Mayer proud.

For more information, call 215-735-1685 or visit www.avaopera.org. You can reach NOTEWORTHY at Michael-caruso@comcast.net. To read more of NOTEWORTHY, visit www.chestnuthilllocal.com/Arts/Noteworthy.