He is black, gay and Jewish — and he sings in Yiddish!

Russell was trained as a professional singer of European opera, but now he sings almost exclusively Yiddish music. by Len Lear I don't think I am going too far out on a limb when I say that there is …

He is black, gay and Jewish — and he sings in Yiddish! 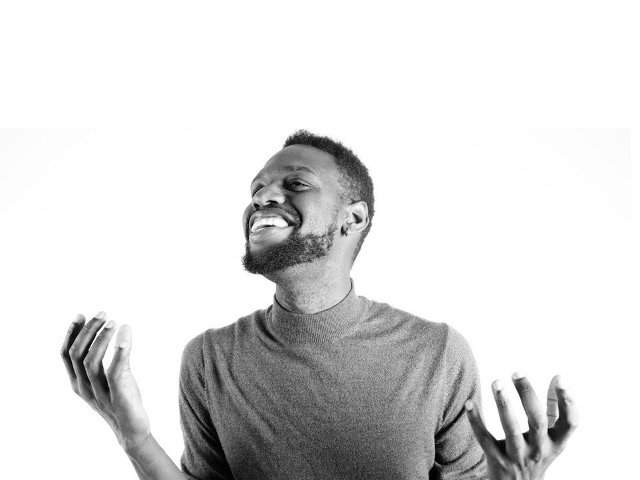 Russell was trained as a professional singer of European opera, but now he sings almost exclusively Yiddish music.

I don't think I am going too far out on a limb when I say that there is no one else in the entire world quite like Anthony Mordechai Tzvi Russell. I defy the New York Times or any other news organization to find one other person who is black, openly gay, Jewish and a professional singer of both European opera and Yiddish music. (Yiddish is the historical language of Central and Eastern European Jews. It is thought to have originated during the ninth century.)

I must admit that there is no local angle here, but Russell, 35, is undoubtedly one of the most fascinating people I have ever met in 48 years as a reporter and editor. He actually lives in Oakland, California, where he will be getting married later this month to a rabbi named Michael Rauthbaum, but I learned about him when he was in Philadelphia recently to co-host and sing at a pre-Passover Seder at the Gershman WMHA in center city.

Russell received a Bachelor of Arts degree from Holy Names University in Oakland, but before and after his degree, he had a host of private teachers and coaches with whom he studied operatic technique, diction, style and repertoire. He went on to perform on numerous operatic stages in New York, Toronto, Montreal, etc., but his most memorable performance was as a freed slave during the Civil War in a Philip Glass world premiere, “Appomattox,” in October, 2007, at the War Memorial Opera House in San Francisco.

But Russell definitely became disenchanted with the operatic scene. “Let me spare us — myself and posterity — the details,” he told me in a recent interview. “At various beginning stages, there is an element in classical voice performance that is very conventional, perhaps, when addressing the existence of minorities in what is perceived to be a very white, European profession. You’re considered anomalous, and some people have very little issue telling you so. They think they’re doing you a favor when they tell you what roles they think would be best for a male singer of color, more often than not completely unsolicited. I’ve been asked if I will sing 'Ol’ Man River' more times than I can count. I’ve gotten up and sung in Italian, German, French, Yiddish, Aramaic and Hebrew, and still, that question: Will you be singing Ol’ Man River?!!!”

Anthony grew up in a religious Christian household, but he felt his religious teachings “betrayed me” when his parents got a divorce. “My father is somewhat estranged from me, so it doesn’t seem fair to speak for him. I don’t think my mother has had much to say about Christianity since the church we were a part of harshly condemned her for wanting to divorce my father, which she eventually did. My mother has been whole-heartedly supportive of my life in Judaism, and I feel like I can trace my initial interest in Judaism to her, as it was an interest of hers as well. She also has been whole-heartedly supportive (of the fact that he is openly gay).”

Russell loved many Old Testament stories as a child, and his interest was rekindled when he met and fell in love with Rabbi Rauthbaum seven years ago. A bass singer, Russell discovered the music of Sidor Belarsky (1898-1975), an American singer born to a Jewish family in Kryzhopol, Ukraine. Belarsky was also an operatic bass who left traditional operatic music to sing Yiddish music. Russell fell in love with Belarsky's music and performed it publicly in Yiddish at an upstate New York synagogue in 2012 before 1,500 people.

After the wildly enthusiastic response by the audience, Russell was hooked. He has been performing Yiddish songs for the past three years all over the U.S. and Canada. He also sings in a Yiddish quartet, one of whose members is also gay. Interestingly, Russell, who says that “God made me this way (gay),” insists he has never encountered any negativity from the Jewish community because of his sexuality or race.

“I feel confident,” he said, “in saying that, for various historical reasons, American Jews have been on the forefront of almost every modern progressive movement in the U.S. I perform for Jewish audiences cognizant of that history and proud to be its recipient...It makes me immensely optimistic that attitudes have changed so quickly in so many parts of the country (about gay rights and gay marriage). Many attitudes have changed but not all, so perhaps I should say I’m guardedly optimistic. People profess to be tired of discussing the 'gay agenda,' but as long as people seem to think there’s no issue in depriving people of equal rights, it’s a conversation that needs to continue indefinitely.”

Does Russell ever perform traditional classical opera any more? “Just barely, and unlike when I was an opera singer, never, ever for free. There’s a perennial Christmas opera, Menotti’s 'Amahl and the Night Visitors,' that I’ve been in almost every year for literally half of my entire life. It seems like I’ve done a thousand productions of it, and there’s scarcely a single note of it I don’t know. There’s a ready-made role for a black bass, Balthazar, the black wise man, and provided there’s a decent robe, crown and a paycheck at the end of the production, all of a sudden I’m an opera singer again. Then I go home, light some Chanukah candles and sing in Yiddish.”

What is Russell's biggest pet peeve? “Being misunderstood. I’ve been dismissed by people who have assumed various things about me. On the opposite end, I’ve been approached by people who assumed other things about me. I dearly wish — as an African-American gay former-opera-now-Yiddish-singing performer who works as a Jewish educator — that people would listen to me and what I have to say before making any assumptions or dismissing me out of hand.”

Who are Anthony's biggest heroes, living or dead? “Paul Robeson and Josephine Baker. They both represent for me the triumphs and tribulations of the artistic African American will against an often harsh and uncomprehending world.”

For more information, visit www.anthonyrussellbass.com, or watch him perform on YouTube.