The Harry Potter Festival that took place this weekend is an obvious point of pride for Chestnut Hill. No event in the neighborhood has resonated outside the borders of 19118 quite like the weekend … 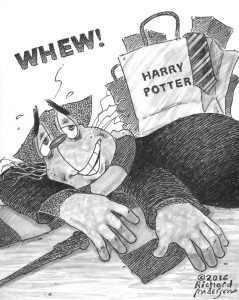 The Harry Potter Festival that took place this weekend is an obvious point of pride for Chestnut Hill. No event in the neighborhood has resonated outside the borders of 19118 quite like the weekend of wizardry.

On Friday by lunchtime, Germantown Avenue was already beginning to crawl with would be wizards – mostly 20-somethings in black robes and Potter-esque prep school attire. The memorabilia trade was already in full swing. It was the first time since Harry Potter weekend began that I recall that kind of crowd on the Friday before the main attraction.

The crowds and the Chestnut Hill parking lots, already packed with out-of-state plates, looked like a promising sign for the weekend. There would be crowds. The question, of course, was how would Chestnut Hill handle it?

The answer is fairly mixed.

In speaking with those who attended, those who live here and those who own businesses here, many agreed that the festival was a wonder. It’s an amazing event with a great deal of interest. Attendees I spoke to had fun and intend to return next year.

Yes, there were long lines for wizard ware, for butterbeer and bathroom waits stretched into hour territory. A few said they were put off by the crowds, but many I spoke to said the crowds didn’t spoil the rest of their day.

The traffic and the parking, however, were a different story. Hill residents reported travel times of nearly an hour to go simply from Germantown Avenue to Stenton Avenue. It was impossible to get into the neighborhood or to leave.

Residents said people were parking anywhere they could. On lawns. In front of driveways. In the lots of private businesses. They were walking from Mt. Airy and from Wyndmoor. On Monday morning, the Chestnut Hill Community Association received a handful of calls from residents hoping the association could do something to alleviate the issue, even though it’s not a CHCA event.

The Chestnut Hill Business District has a real hit on its hands. There’s clearly something about celebrating Harry Potter on Germantown Avenue that has inspired Potter fans far and wide. It’s become a Wizarding Woodstock – an event everyone will remember that faces a crowd surge that is difficult to anticipate and prepare for.

The business district now has a whole year to assess what fell short this year and how it can improve. Most of the elements are there for a real success. The next step will be to figure out how to get a handle on the large volume of cars and people pouring into the neighborhood.

The Harry Potter Festival is a great event. If anything has put Chestnut Hill “on the map,” this is it. Getting it right next year will be crucial to making it a long-lasting success.