The men's tennis team at Chestnut Hill College celebrates its Central Atlantic Collegiate Conference championship, the first CACC title the college has won in any sport. by Tom Utescher With a … 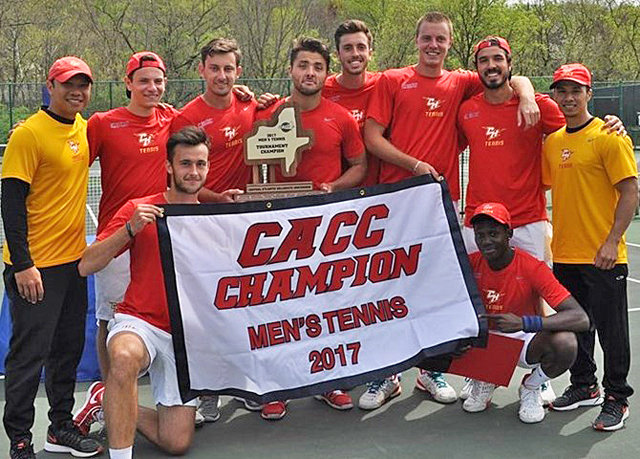 The men's tennis team at Chestnut Hill College celebrates its Central Atlantic Collegiate Conference championship, the first CACC title the college has won in any sport.

With a convincing sweep of second-ranked Post University in the finals of the Central Atlantic Collegiate Conference tournament, the top-seeded Chestnut Hill College men's tennis team won the program's first conference championship at their home courts on April 23. It was not only the first tennis title for the Griffins, but also the first CACC championship won by the college in any sport since its intercollegiate teams moved up to NCAA Division II and joined the conference in the 2007-2008 academic year.

Chestnut Hill went undefeated in regular-season play in the conference this spring, knocking off Post, the team it would face in the title match, by a 7-2 score in early April.

In college matches, three doubles contests precede six flights of singles play, but while all nine bouts are completed during regular season encounters, tournament competition ends as soon as one team wins five matches. At the recent CACC tourney, the host Griffins posted 5-0 victories over both Philadelphia University, their fourth-seeded semifinal opponent, and over Post in the finals.

CHC's first-year head coach, Ryan Gargullo, got his own start in tennis in a scholastic setting right up the hill at the old Chestnut Hill Academy. He was part of a Blue Devils dynasty that dominated the Inter-Ac League, and when he graduated in 1998 he moved on to play at La Salle University, where he became team captain. He then played many roles as a coach and instructor, including working at the Evert Tennis Academy in Florida and also serving as an assistant coach at CHC in 2010-12.

Speaking of his team's CACC title, he said "I was told that this is the first one in history, so we're happy we could do that for the Chestnut Hill College community. Our guys are incredible; we don't just rely on one or two guys, we rely on each other, and I think that's our strength. We knew we had the talent to win it, but we also knew that if we weren't together, we could let it get away."

Asked about the differences between the most recent CHC teams and the ones he'd worked with some years earlier, he replied "I think it's the culture, the sense of community that was brought about by these guys, especially this season. Chestnut Hill has had talented teams for a number of years, but these guys really became that band of brothers, and I'm just glad I was able to provide an environment that helped foster that."

Two weekends ago, the Griffins laid the groundwork for their finals victory by opening up with a sweep of the three doubles matches (each consisting of a single pro set). At number one, sophomore Pierre Kohler (Les Sables d'Olonne, France) and senior co-captain Jonathan Ducretot (Antibes, France) wrested an 8-6 victory from their Eagles opponents.

Now, the Griffins only needed to win two singles bouts to clinch the CACC crown. The matches that wrapped up the final ended almost simultaneously with identical 6-0, 6-2 scores, as Ducretot won at third singles and sophomore Victor Iove (Tournai, Belgium) took the number six match.

Kohler and Andre had been playing at one and two, respectively, while Bocaletto competed at number four and Gautier was in the fifth spot. An eighth member of the Chestnut Hill team who did not see action in this match is Pedro Oranges de Figueredo, a senior from Sao Paolo, Brazil.

For most of the season, including the first meeting with Post in early April, Bocaletto played second singles, but he became hampered by an abdominal strain. He returned for the postseason at fourth singles, while Andre and Ducretot each bumped up one flight.

"It's a long season and things like that happen," Gargullo said, "but he found a good comfortable position to play."

Aside from his own championship experiences at CHA, Gargullo won a national club title after his college career at La Salle ended. In 2011 he played in the USTA Adult 4.5 men’s league where his team, the Delaware Snipers, defeated Southern California for the crown.

He recalled that even back at Chestnut Hill Academy, a close bond between the players contributed to the team's success.

"It felt a lot like what this team (CHC) has, but of course at this level it's a little different because the stakes are a little higher. Here, we're also getting guys together with different backgrounds from different parts of the world. That can be a little tricky, but this group made it work."