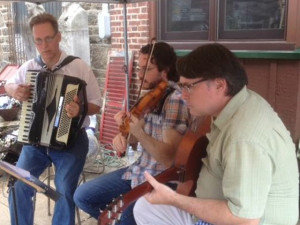 David Graves (left) is seen performing with the other members of the Quarter 'til Four Trio: Steve Kadlecek on violin and Daniel Boehmcke on guitar. (Photo by Daphne Dennis)

What’s the first thing that comes to your mind when you hear the word accordion? If the answer is Lawrence Welk, listen up!

Bruce Springsteen, The Rolling Stones, The Who, Bob Dylan and Paul Simon are among the top musicians and bands that have incorporated the accordion into their repertoire. You can also hear the accordion being played by a few of today’s most popular groups, including The Lumineers, Mumford & Sons and The Avett Brothers. The accordion has become so hip, in fact, that the Accordions Around the World Festival was held last summer at Bryant Park in New York.

“People say the accordion got that cheese factor from Lawrence Welk, that he kind of damned it into oblivion. But now we’ve moved on, and there’s a whole generation who wouldn’t even know who Lawrence Welk is. That’s why the accordion is coming back,” said David Graves, a musician who has lived in West Mt. Airy since 1998.

“Five years ago, a friend saw an accordion for sale on eBay for $50 and gave it to me as a present. I never played one before. It sat there for four years until 2012. I don’t know what made me pick it up, but I was bitten by the bug,” David, who now has five accordions, admitted, “I went overboard.”

He purchased his first accordion from a woman he met in front of Weavers Way Co-op in Mt. Airy. He then started taking lessons at the Acme Accordion School in Westmont, NJ. “My teacher, Joanne Darrow, said, ‘The one you have is nice, but it’s too small; you need a bigger one.’ So I bought the third one from her.”

David’s latest acquisition is known as a convertor accordion. He explained that in the 1920s and '30s — when there was a seriousness about accordion music, and classical pieces were being commissioned for it — a left keyboard was developed that plays single notes, as on a piano, instead of the oom-pah-pah chords we typically associate with the accordion.

The best accordions come from Castelfidardo, a small town in central-eastern Italy. Historically, the town is remembered as the site of a victorious battle in 1860 over a pontifical army. But to David, “It is ground zero for accordions.”

David is so serious about his accordion playing that he practices at least two hours a day. “I practice somewhere between a half-hour and an hour every morning before I go to work, much to the chagrin of my neighbors. Then I practice a minimum of an hour in the afternoon. A perfect weekend for me is spent playing the accordion,” he said. He’s been known to put in four to five hours a day of practice.

A classically trained pianist, he also plays the keyboard in three local bands and has now integrated the accordion into each one. The Quarter 'til Four Trio, made up of violin, accordion and guitar, performs older, traditional music from the 1890s through the 1940s. “We try to stay eclectic, but there are certain types of music that lend themselves to this instrumentation, such as the gypsy jazz of Django Reinhardt and Stéphane Grappelli.”

The Trailer Park Trio, formed in the mid 1990s, can have up to six members and is steeped in old-time jump and western swing. David describes it as “high-energy music, played wherever someone might be tapping his or her foot.” This band has performed in Atlantic City, New York, New Orleans and in and around Philadelphia.

The Gin Canaries, which got together two years ago, plays more straight-up jazz standards from the American songbook of the 1920s to the 1940s.

By day, David, 54, is the director of technical services at BizTech, a leading Oracle consulting and IT services firm. He was born and raised in Newtown Square and moved to West Philly to attend the University of Pennsylvania, where he received a degree in engineering in 1982. It was there that he began to hook up with various musical groups. “I’ve always viewed engineering and music as closely related. They’re both scientific and logical.”

He started playing piano when he was five and still remembers how traumatic recitals were when he was a kid. “The memory still makes me shake,” he said. Yet, he’s performed at the Mt. Airy USA Street Fare in front of thousands of people with no problem at all.

David often wonders where his musical sensibilities come from. “I love that old-time stuff,” he said. “I have a very vivid memory from when I was 17 of listening to Bob Perkins (a jazz expert) religiously on the radio. He was on WHYY at the time, and now he’s on WRTI.

“My fate was sealed when I was 26 and met Jim Smith, a guy who played guitar for a living. I would go listen to him whenever he played. Occasionally, there would be a piano, and I would join in. At one point, the owner of the bar came over and said I could play every time Jim did. That’s what started my professional career. Jim and I still play together.”

You can hear David play the accordion with The Gin Canaries from 8 to 10 p.m. on the fourth Sunday of every month at Earth Bread + Brewery, 7136 Germantown Ave. The group also performs from 7 to 11 p.m. at The Saloon, 750 S. 7th St., on the second and fourth Saturdays of every month and at the Blue Comet, 106 S. Easton Rd., Glenside, on the first Saturday of each month. The Trailer Park Trio often plays at the Philadelphia Salvage Company, 542 Carpenter Lane in Mt. Airy. Check their website at philadelphiasalvage.com for upcoming events. The three bands are also available for private gigs.

More information at 215-748-8628 or dave@graves.com. You can also check the bands’ websites: gincanaries.com and trailerparktrio.com.