‘Golden Yoga’ on Hill for those who must remain seated

Barbara Levitt, a yoga teacher for 42 years and author of “Golden Yoga,” teaches. “seated” yoga classes twice a week in Chestnut Hill for elderly people who aren’t able to do exercises on …

‘Golden Yoga’ on Hill for those who must remain seated 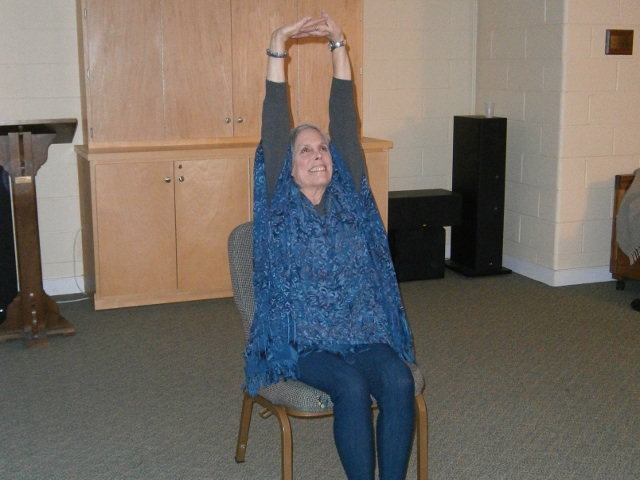 Barbara Levitt, a yoga teacher for 42 years and author of “Golden Yoga,” teaches. “seated” yoga classes twice a week in Chestnut Hill for elderly people who aren’t able to do exercises on the floor. (Photo by Meredith Sonderskov)[/caption]

Pablo Casals, the famous cellist, was 94 years old and still practicing three hours every day. When he was asked why he still practiced, he said, "I'm beginning to notice some improvement."

One thing the Chestnut Hill area has no shortage of is yoga classes. You can hardly throw a small stone without hitting a yoga teacher or his/her students. However, local author Barbara Levitt, 71, may just be the only area yoga teacher who leads “seated” yoga classes for elderly people who aren’t able to do exercises on the floor.

The classes are held at the Center on the Hill at the Presbyterian Church of Chestnut Hill, 8855 Germantown Ave. The “Golden Yoga” class that I visited on a recent Wednesday afternoon included a dozen very enthusiastic participants. These men and women were all attentive and determined to do their best to fully participate in the weekly yoga sessions.

Most could follow Ms. Levitt’s movements exactly, although a few did have difficulty replicating her actions. For example, when the instructor raised her arms over her head, they could only raise their arms to shoulder height. Despite these limitations, Ms. Levitt was always encouraging, never critical.

After the session I spoke with several people, none of whom would allow their names to be used in this article. All of them said that these sessions of yoga are helpful in keeping their bodies able to move and relieving the stiffness and aches that come from inactivity.

Moderate exercise, such as yoga, is promoted by medical authorities as being beneficial, not only for your body but also for your brain by stimulating blood flow. I can attest to this. At 81, I feel much sharper mentally when I exercise on a regular basis. Ms. Levitt noted that current research points to the positive effects of yoga on the nervous system that bring about helpful mood changes.

Levitt has been a yoga teacher for 42 years. As a student of Dr. Vijayendra Pratap, she practices and teaches a very traditional form of classical yoga, but 20 years ago she was presented with a special challenge. Logan Square, a residential community for seniors in Center City, asked her to teach a class.

Barbara realized that for many of the elderly people, some modifications would be necessary. She was determined, however, to offer the essence of a complete yoga program, even to those who needed a walker to get to class.

Over the years, she continued to make adjustments, using feedback from her students to fine-tune the program. Her experience led her to write the book, “Golden Yoga,” so that more senior citizens could benefit. Currently, in addition to the Watermark at Logan Square and Chestnut Hill’s Center on the Hill, Levitt teaches at the Sunrise in Blue Bell and in the Abington Adult Evening program.

"It is inspiring," said Barbara, "to see the commitment, humor and wisdom my students bring to every class. They are accomplished people who have lived full, successful lives, and they intend to continue learning and growing into their 90s and beyond! Like all yoga classes, you see the improvement happen before your eyes. They always seem to leave the class younger than when they arrived!"

Make no mistake; these hour-long classes are an experience. It's not “power yoga” or “hot yoga.” The room doesn't pulse with sweating, hard bodies, but the leg raises and twists, the stretching and bending, the attention to the body's limits and potential, the relaxed concentration and breathing practices add up to a very satisfying yoga class. Many of Barbara's students have been faithful regulars for years. A letter to Barbara from one of them sums up the experience for many:

“I think this is a great class. My fellow students are wonderful, and the teacher is superb. I think our bodies reflect the exercises we're doing, and I know I feel much more limber after a class than before. It has done me a lot of good, and I'm sure I speak for everybody when I say Thank You!” -- Florence.

This program has been taught to groups dealing with cancer, AIDS and Lupus. It has been presented at health fairs, to the members of Friends Life Care at Home, at the Women’s Health Source of Thomas Jefferson University and even to the U.S Army Corps of Engineers. Those residents in assisted care who are coping with Alzheimer’s and other dementia-related difficulties have also benefited from an adapted version of the Golden Yoga program.

In addition to her teaching schedule, Barbara manages the publishing department for SKY Foundation and the Yoga Research Society. She has been a resident of West Mt. Airy and Chestnut Hill since 1976. She and her husband are active members of Penn Staters for Responsible Stewardship and life members of the Alumni Association. Their son, BJ, and grandsons, Joshua and Alex, live in Florida.

Levitt seldom misses a day walking her dogs, Churchill and Angela, in Pastorius Park or to the shops on Germantown Avenue. "I love the village of Chestnut Hill," she insisted. "Every day I wake up and realize that there is nowhere in the world I'd rather be!"